Good Morning. This is Alex Marienthal with the Gallatin National Forest Avalanche Forecast on Sunday, January 24th at 7:15 a.m. Today’s forecast is sponsored by World Boards and Cowgirl Creativity. This forecast does not apply to operating ski areas.

This morning the mountains have no new snow. Temperatures are single digits to teens F. Wind is west-southwest at 5-15 mph with gusts to 25 mph. Today will be mostly sunny with temperatures in the teens to low 20s F and westerly wind at 5-15 mph with gusts to 25 mph. The next chance for snow is late Wednesday in the south of our advisory area and Thursday in the north.

Large avalanches are possible to trigger due to a layer of weak, sugary snow near the ground, which is buried 2-3 feet deep on many slopes. Minimal weight has been added to the snowpack over the last few days. It is slowly becoming more difficult to trigger an avalanche, but the weak layer at the ground is slow to gain strength and remains fragile. Yesterday at Lionhead we had unstable, collapsing and propagating stability tests, and saw recent avalanches from the past 4-10 days (video, snow profile, photo). On Thursday, Doug and I were on Buck Ridge and had the sugary snow near the ground break in our stability tests (video, snow profile).

There is also a thin layer of surface hoar buried 8-10” deep (photo of layering) that we found at Lionhead, Buck Ridge and Beehive. This layer has not propagated in stability tests or produced avalanches (except in Cooke City, see below). It is easy to dig down a couple feet to look for and test this layer.

Yesterday in the Bridger Range, moderate downhill winds on the east side of the range drifted snow into hard slabs across mid-elevation terrain, far below the ridgeline. Today these slabs could be unstable in areas like Saddle Peak or The Throne.

The primary factor limiting our terrain selection is the sugary snow at the ground. Until that can be trusted we are avoiding most slopes steeper than 30 degrees. Simple, small slopes with low consequences may present acceptable risk to ride down, across or under. Travel on or underneath any steep slope requires careful thought about the snowpack and consequences of a slide. Today, large avalanches are possible to trigger and the avalanche danger is rated MODERATE.

Yesterday near Cooke City, a snowmobiler triggered an avalanche, was partially buried to his waist and uninjured (limited details). There are two buried weak layers on some slopes near Cooke City which make avalanches possible. A layer of surface hoar buried 12-18” deep produced avalanches, cracking and collapsing over the last week (snowmobile triggered avalanche details, human triggered slides details and photo), and there is a weak layer of sugary snow buried 2-3 feet deep. Although these layers do not exist on all slopes, you can avoid avalanches by avoiding slopes steeper than 30 degrees (see Dave’s videos from last weekend: video1, video2). Diligently assess the snowpack before riding steep slopes. Review recent avalanche activity and media before you head out (Cooke regional page), and dig to look for buried weak layers on slopes similar to where you plan ride. Today avalanches are possible and the avalanche danger is rated MODERATE. 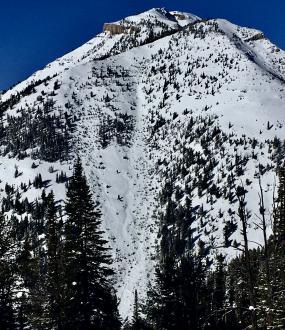 We saw this natural avalanche on 1/23/21. It likely occurred in the past week. SE 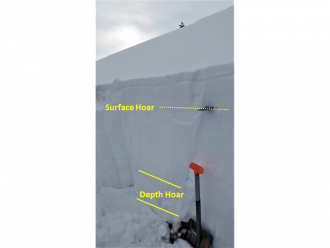 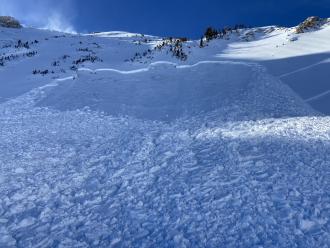 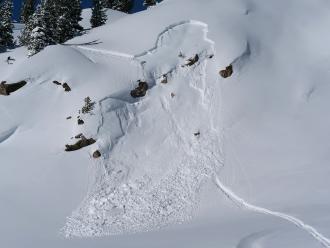