Good Morning. This is Dave Zinn with the Gallatin National Forest Avalanche Forecast on Monday, January 25th at 7:00 a.m. Today's forecast is sponsored by Montana State Parks and Alpine Orthopedics & Sports Medicine. This forecast does not apply to operating ski areas.

You are tired of hearing it and we are tired of it needing to be said, but that won't change the weak structure of the snowpack from West Yellowstone through the Bridger Range. On Trapper Ridge yesterday, I found a shallow, very weak snowpack where avalanches are less likely because it lacked the critical ingredient of a slab of more cohesive snow above the sugar (video). This is the exception. Nearby in Lionhead the day before, Alex saw recent avalanches, heard "whumphs" and had unstable snowpit results (video, snow profile, photo). This corresponds with what he and Doug found at Buck Ridge last week (video, snow profile). This week skiers and riders reported avalanches breaking naturally deep in the snowpack and continue to hear "whumphing" and get unstable test results (avalanche activity list). In addition to weak snow near the ground, a layer of surface hoar is now buried 8-10" deep. Avalanches will occur on this layer when it gets loaded by more snow.

Three days have passed since the last new snow and weak layers are adjusting. Avalanches are less likely but don't be fooled into thinking that weak snow is getting stronger or that riding and skiing steep terrain is a sustainable practice right now. Manage terrain carefully because large, destructive avalanches remain possible. The danger is rated MODERATE.

Avalanches in Cooke City are breaking 12-18" deep on a layer of feathery snow crystals buried by the last storm. Two days ago, a rider was buried to his waist north of Sheep Mountain, he was okay but the sled was trashed (limited details). Three days ago, snow bikers triggered a pair of avalanches on the other end of Sheep Mountain, both escaped, but the slides were large enough to send a skier or rider on an unpleasant trip down the mountain (photos and details). Skiers close to Cooke City in Yellowstone National Park reported widespread collapsing and we are still receiving new photos of natural avalanches that broke within the last week (photo). Look at the photos page and follow the weather and avalanche log to stay up to date. The layer of buried surface hoar is not universal in its distribution but it is best to assume that it is as I explained in my Cooke City videos last week (video1, video2). In addition to this reactive layer, some slopes harbor a weak layer of sugary snow 2-3' deep.

Navigation in avalanche terrain requires careful planning and assessment. Human triggered avalanches are possible and the danger is rated MODERATE.

You're Tired of Hearing It... Trapper Ridge - 24 January 2021
Large avalanches possible, Lionhead Ridge - 23 Jan
It's not getting any stronger, Buck Ridge-21 Jan
Heads Up: New Weak Layer Buried in Cooke City - 17 January 2021
Maid of the Mist 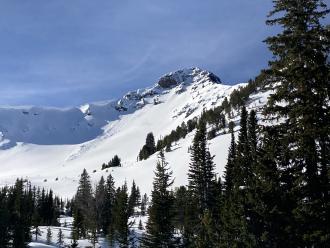 From Obs: "I skied into Maid of the Mist today, it looks like part of 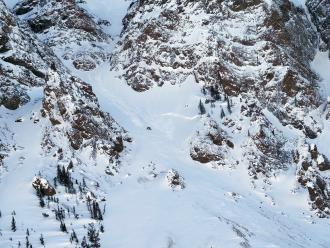 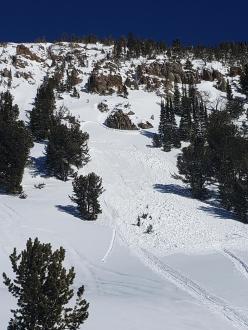 2 slides on the south side of Sheep Mtn. Crown looked to be 1-3 feet