Natural avalanches, very large below Chimney Rock by Daisy Pass. And north side of Crown Butte 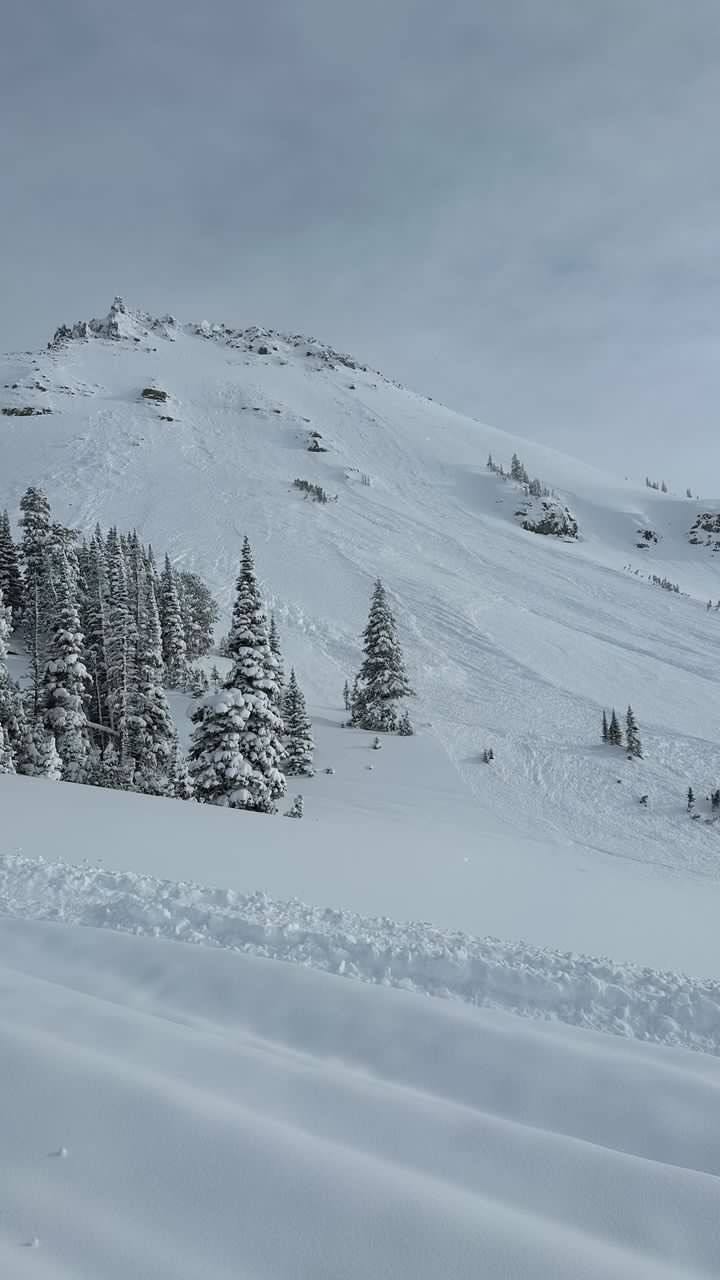 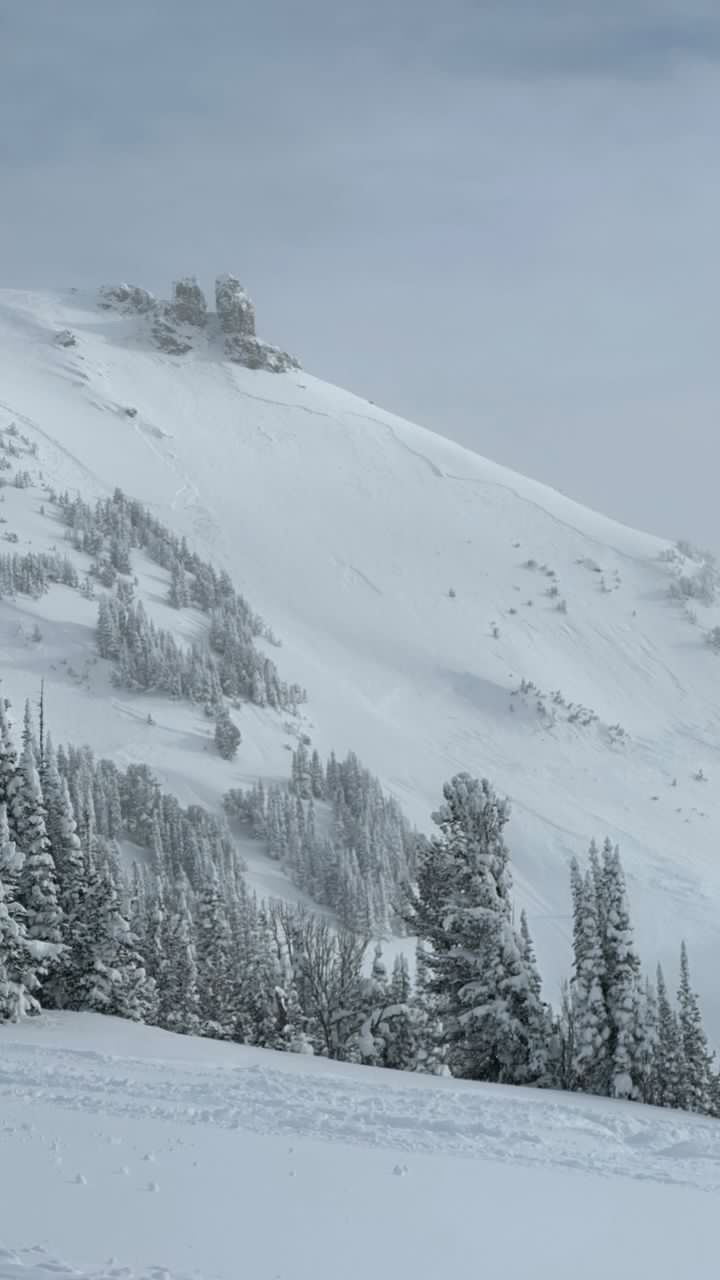 I was skinning up the ramp on Friday when I thought I heard a jet flying over in the clouds, but the sound stopped instantly. I assumed that I heard an avalanche, but was solo on the ramp and had no desire to go that way for a better look.  It was snowing and foggy. Today a friend said she could see a crown on the north side of Wolverine bowl that appeared to be 4 feet. With all that water, I thought something would go deeper, eh?

There were numerous debris piles, point releases, and crowns on the north face of Elephant and the northeast face of Blackmore this morning.  Most of them appeared to have run during the storm (1/27) and had been covered by at least 6 inches of new snow. 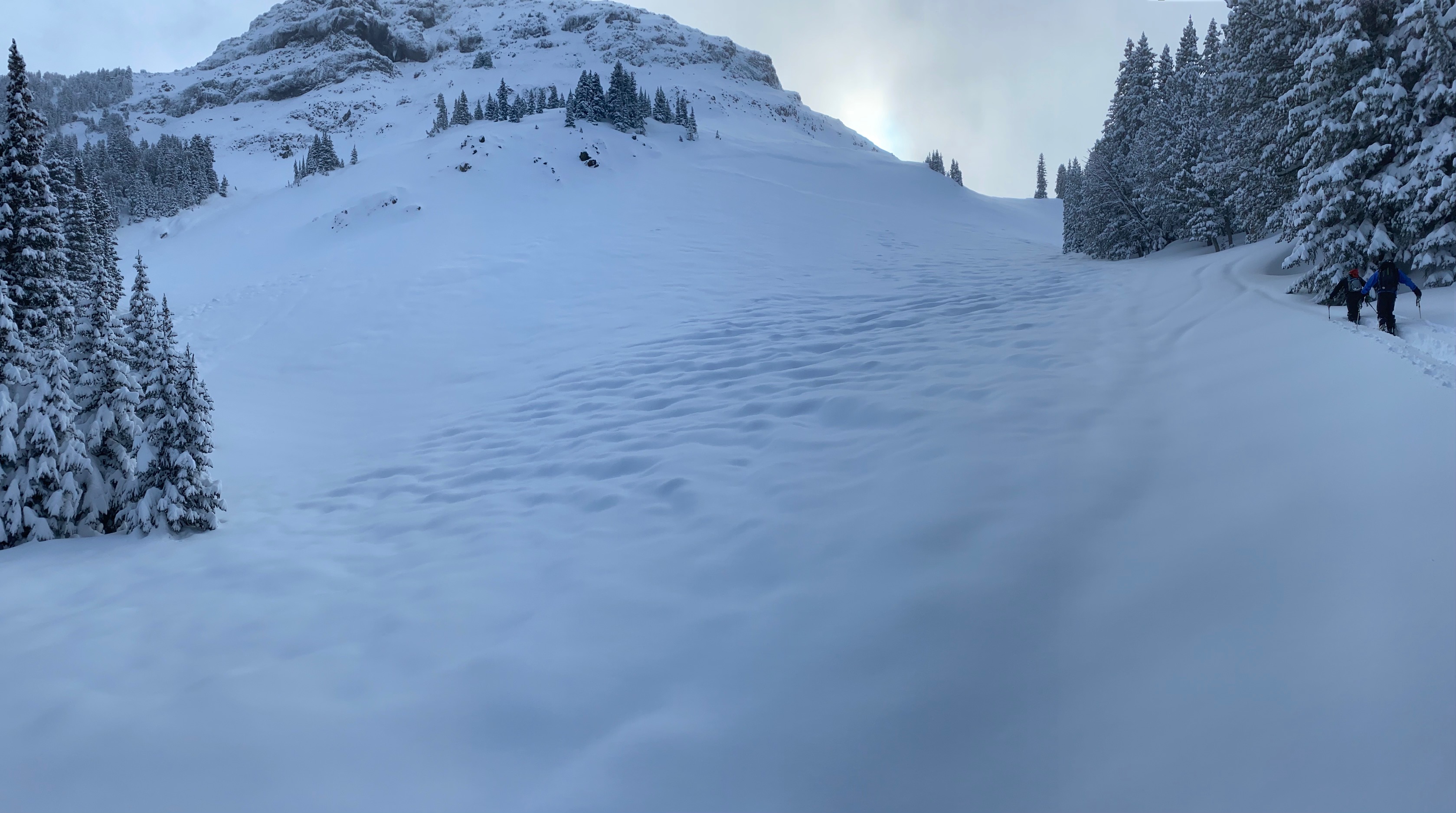 We rode to the Taylor Fork weather station (near Pika Point on the rim of Sunlight Basin) and noticed a few slides along the way. At the weather station we could see that the north end of the basin natural avalanched: the slopes from where the cornices end in Sunlight Basin past Pika Point. It broke up to 2.5 feet deep on an old layer of facets and surface hoar. The slide was R2 D2, 3-400 feet vertical and at least 750 feet wide. It was a large Hard Slab. We spent time at the crown digging, making a movie and getting cold. No surprises, just great to see a real avalanche. We also saw smaller slides looking west from the station, close by. Afterward, we rode to the Sage/Carrot divide in deep snow; hero riding. Skyline Ridge was obscured in clouds.

On the drive back to Bozeman we could see many slides on road cuts and on slopes across the river; low elevation avalanches that we don’t get to see often. 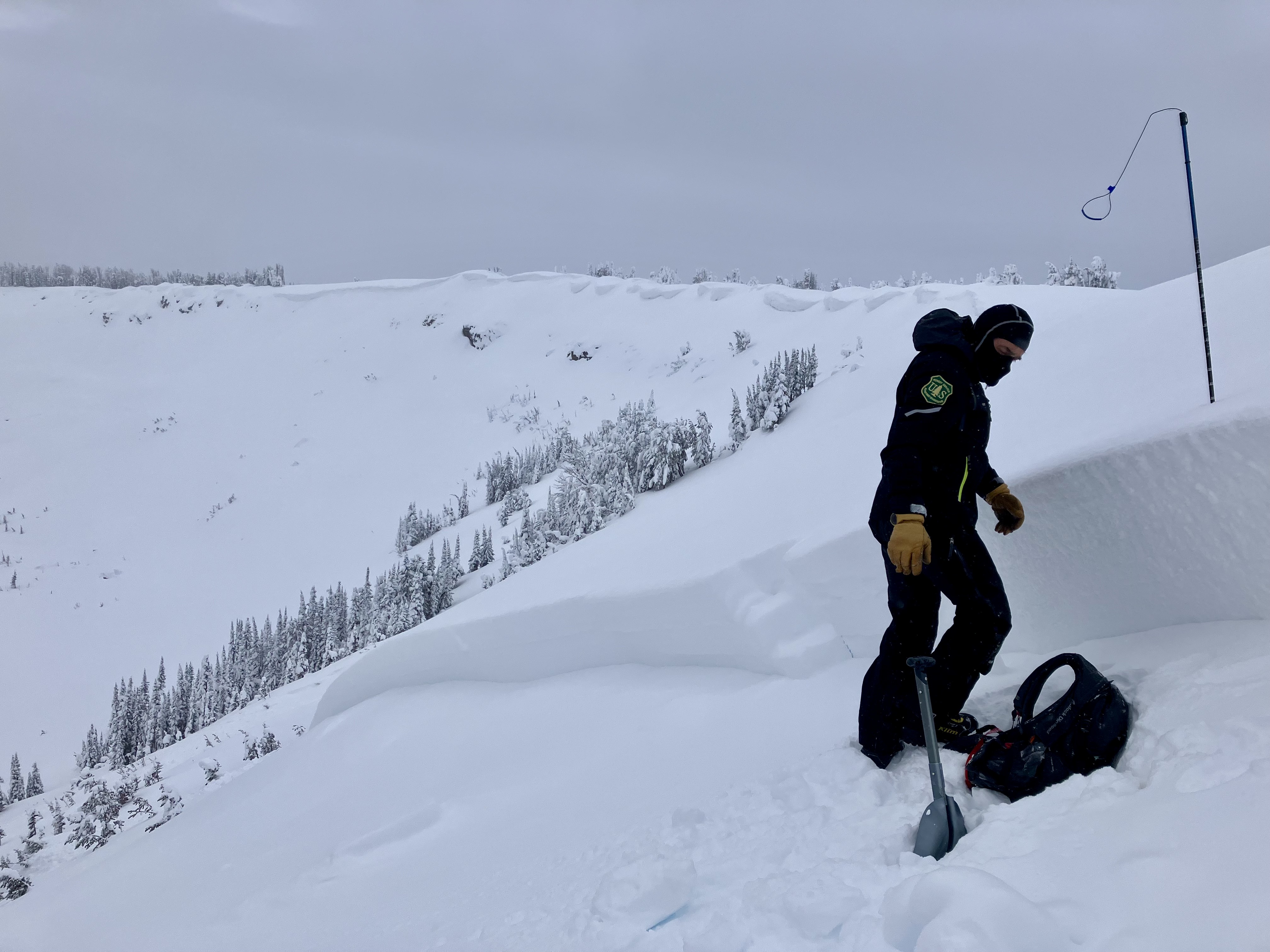 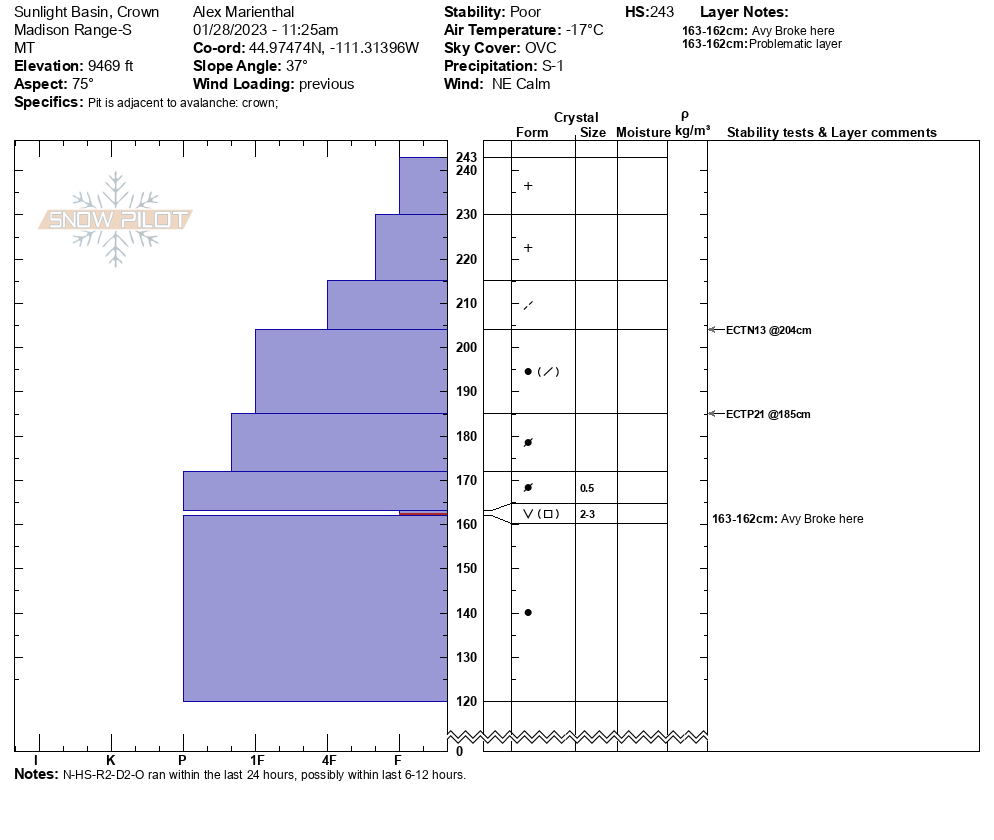 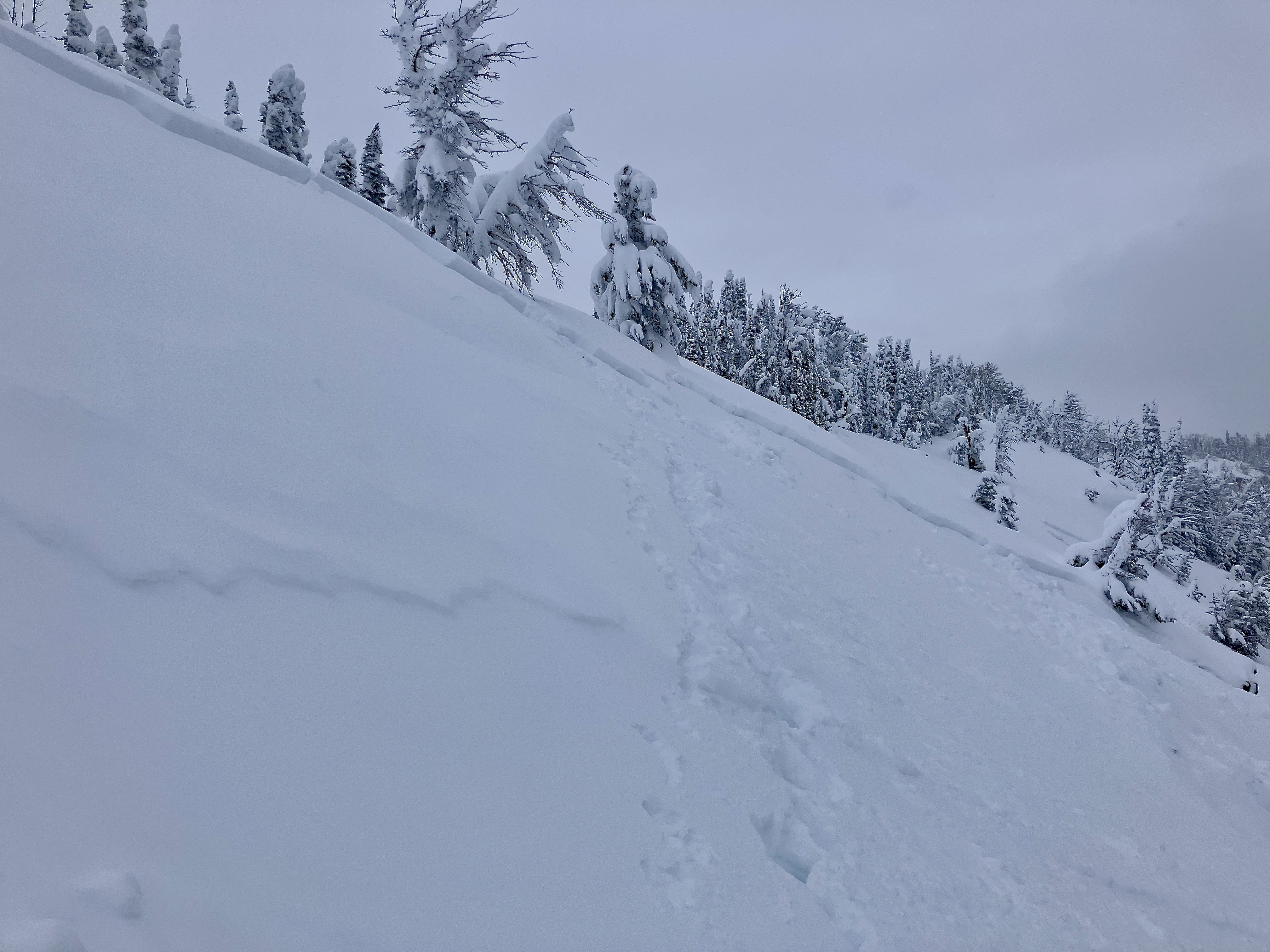 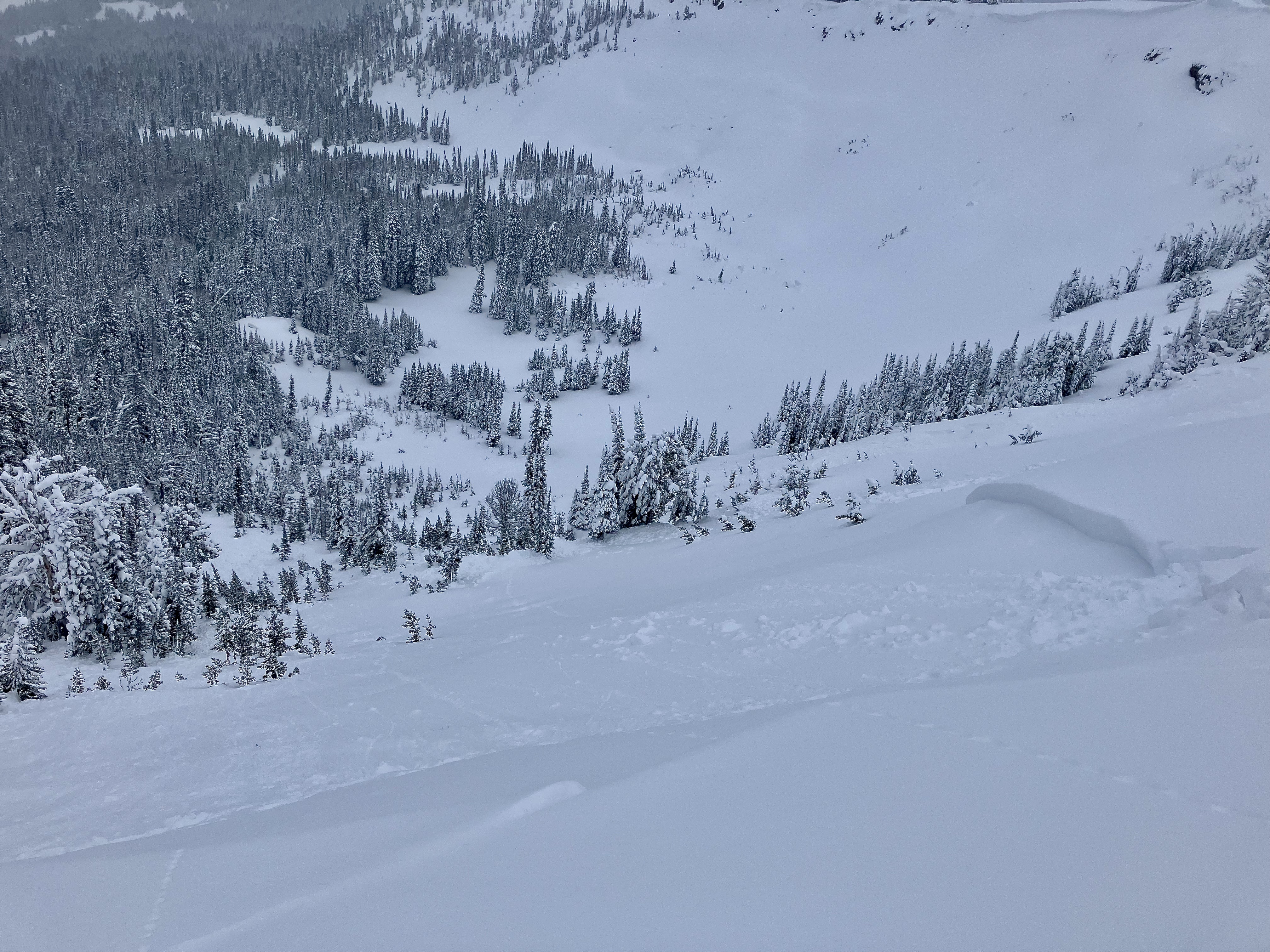 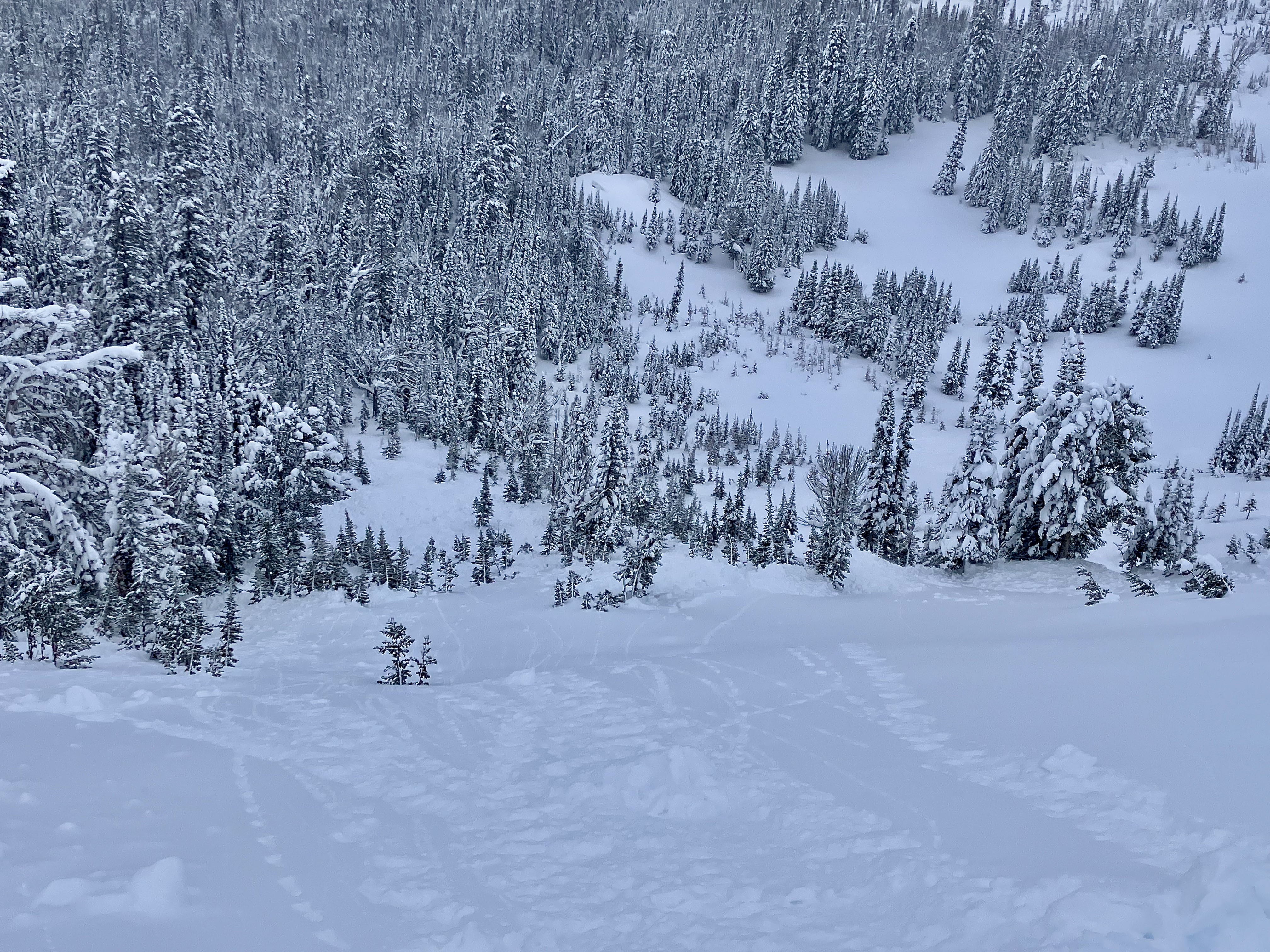 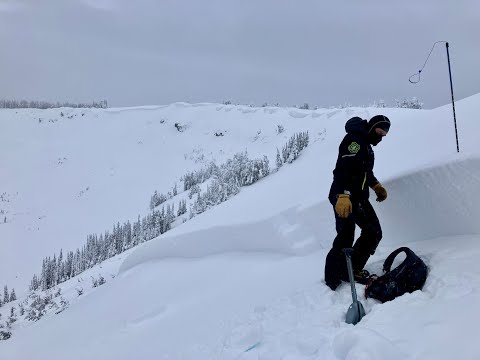 From IG message: "Another one today. Back of buck creek. Triggered 100 yards above where I crossed below it in the safe zone, after I went by. No burials." 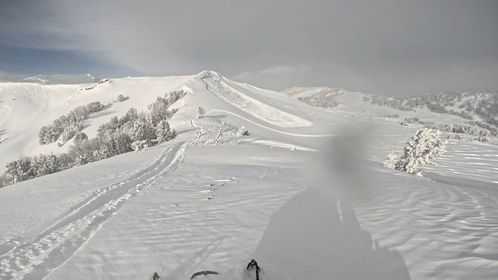 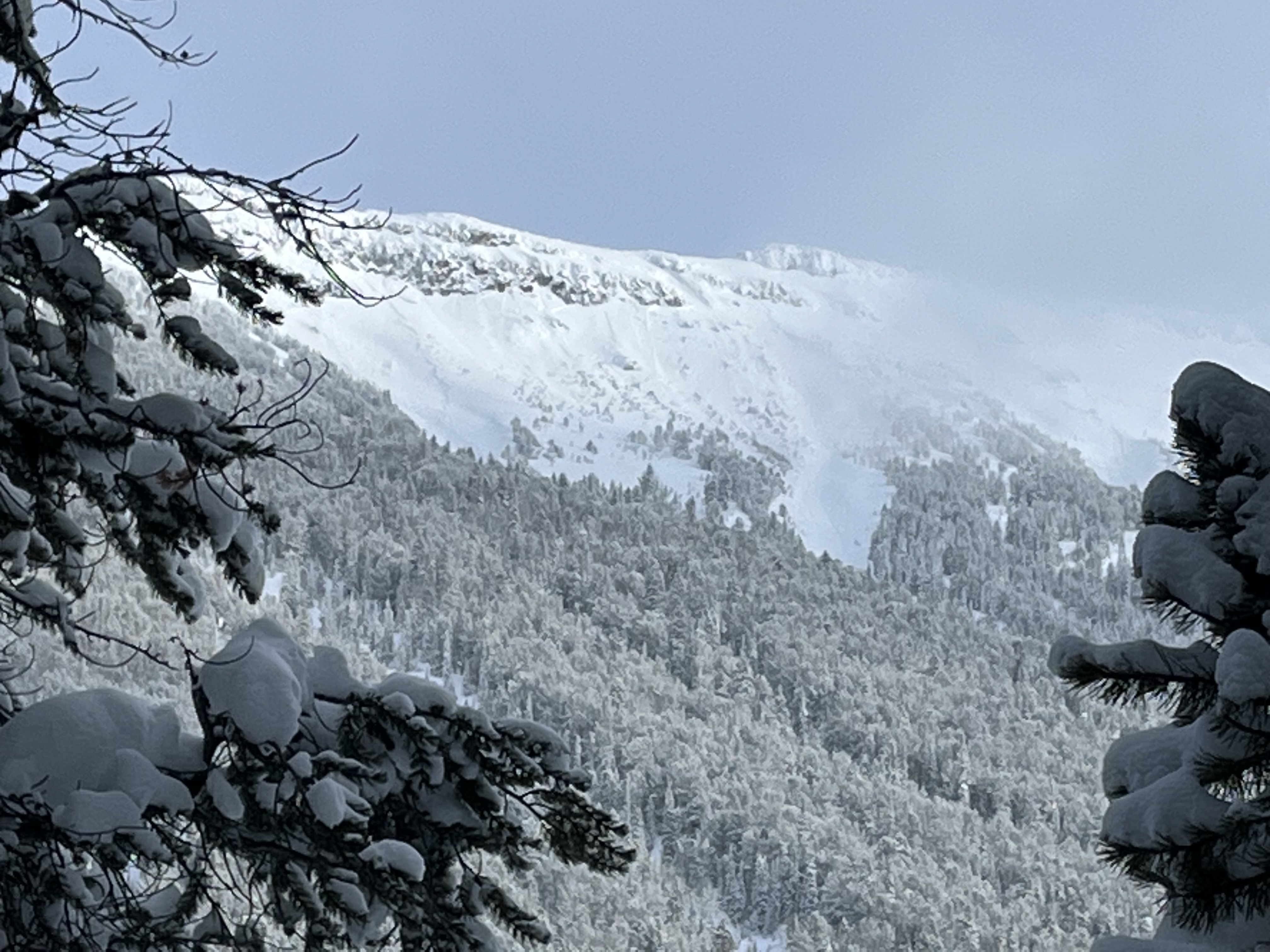 A couple naturals seen on similar aspects and a couple whomps. While we were going up. Stuck to low angle fun the rest of the day.
Stay safe this cycle you guys! 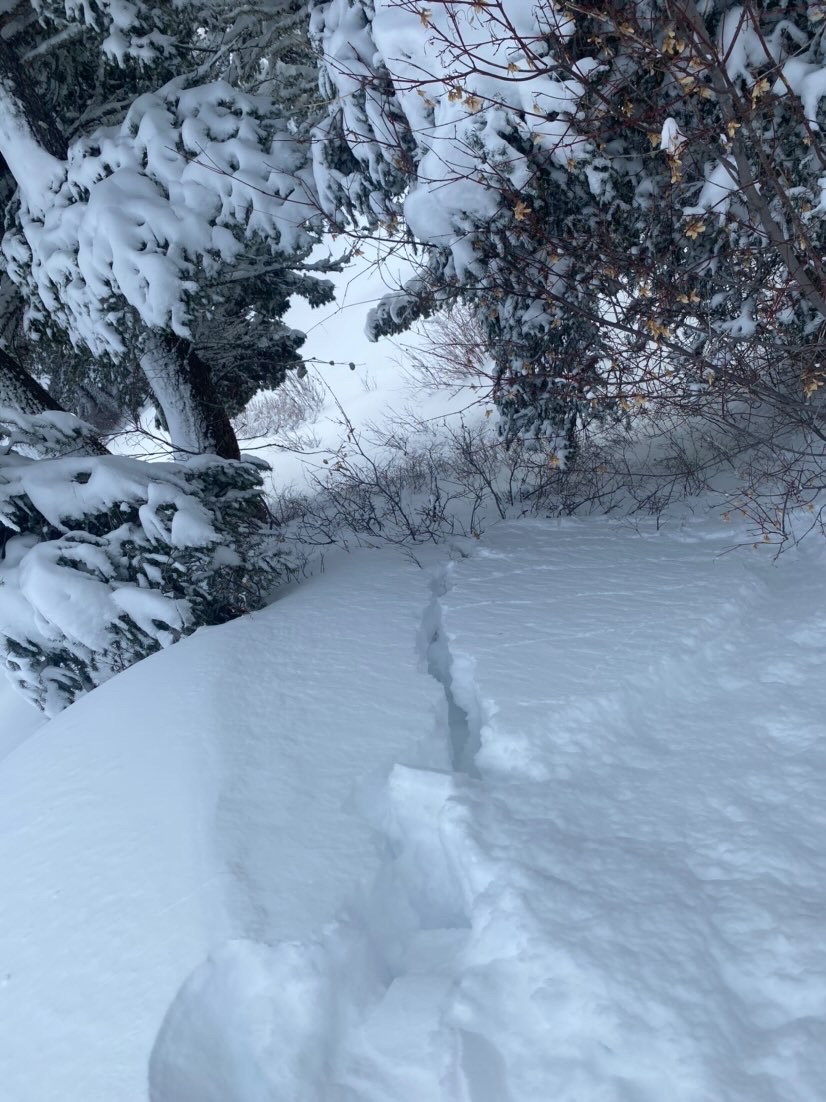 While snowmobiling up Little Bear we witnessed this natural avalanche. There was 2-3' of new snow. 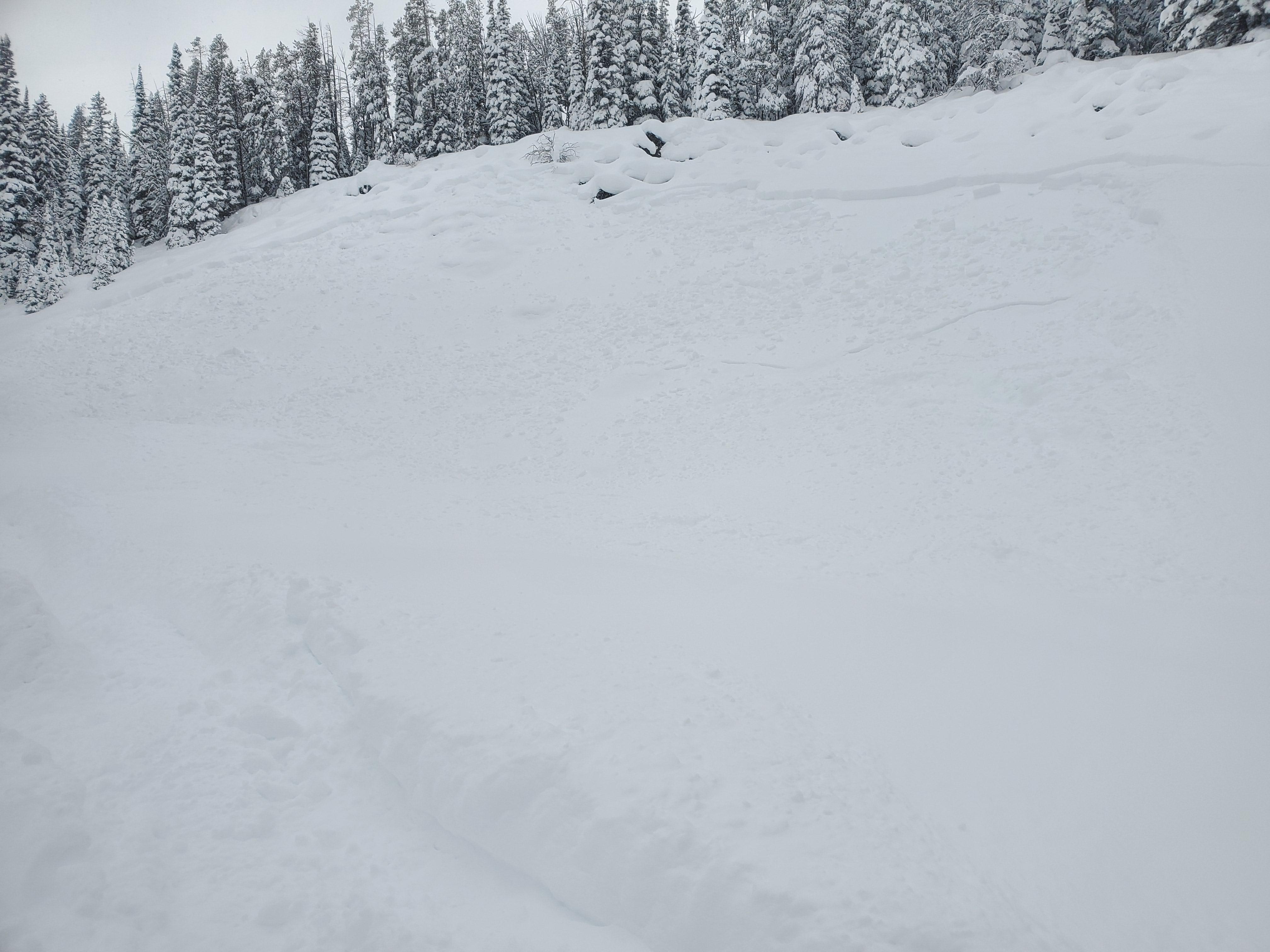 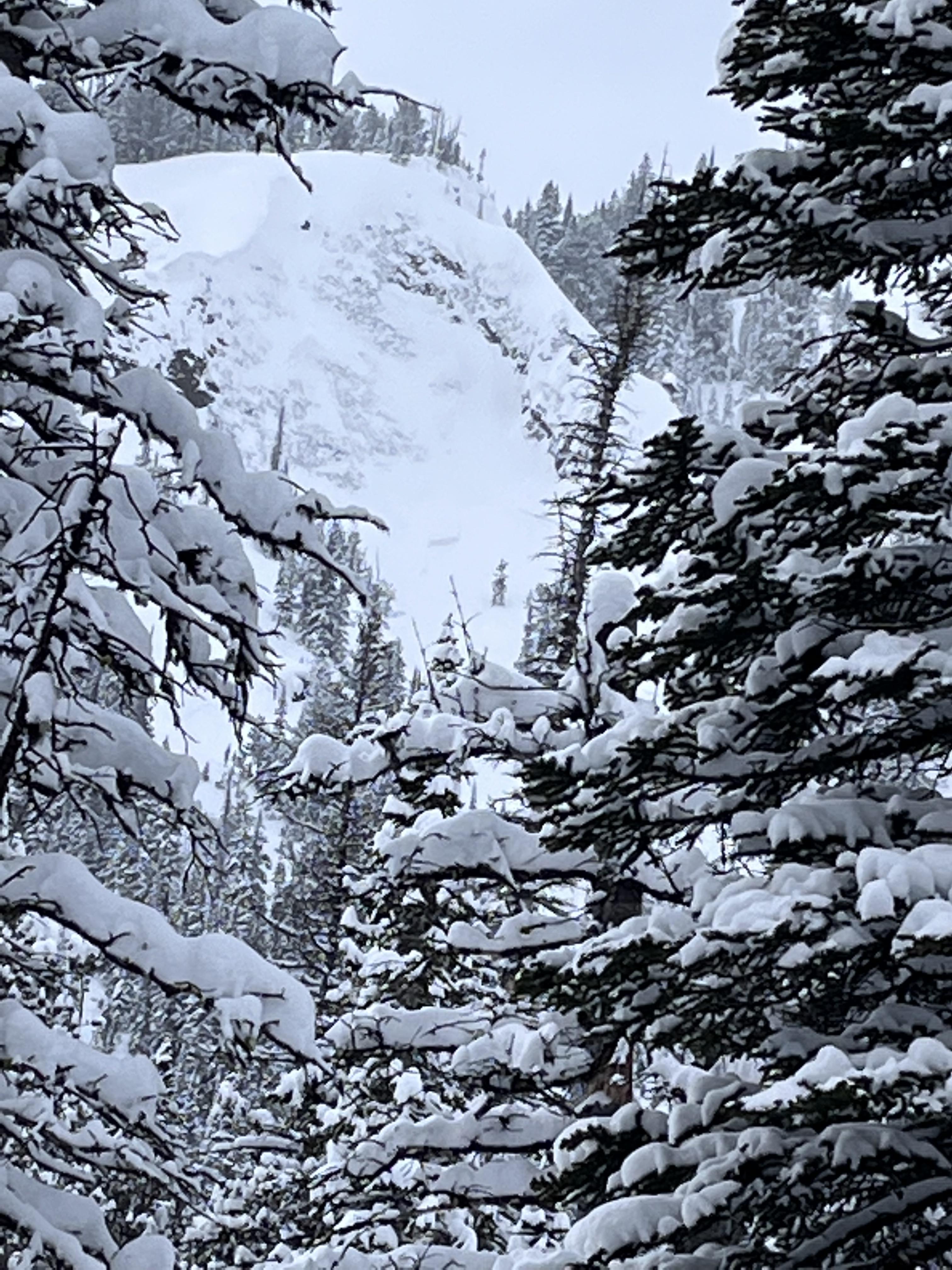 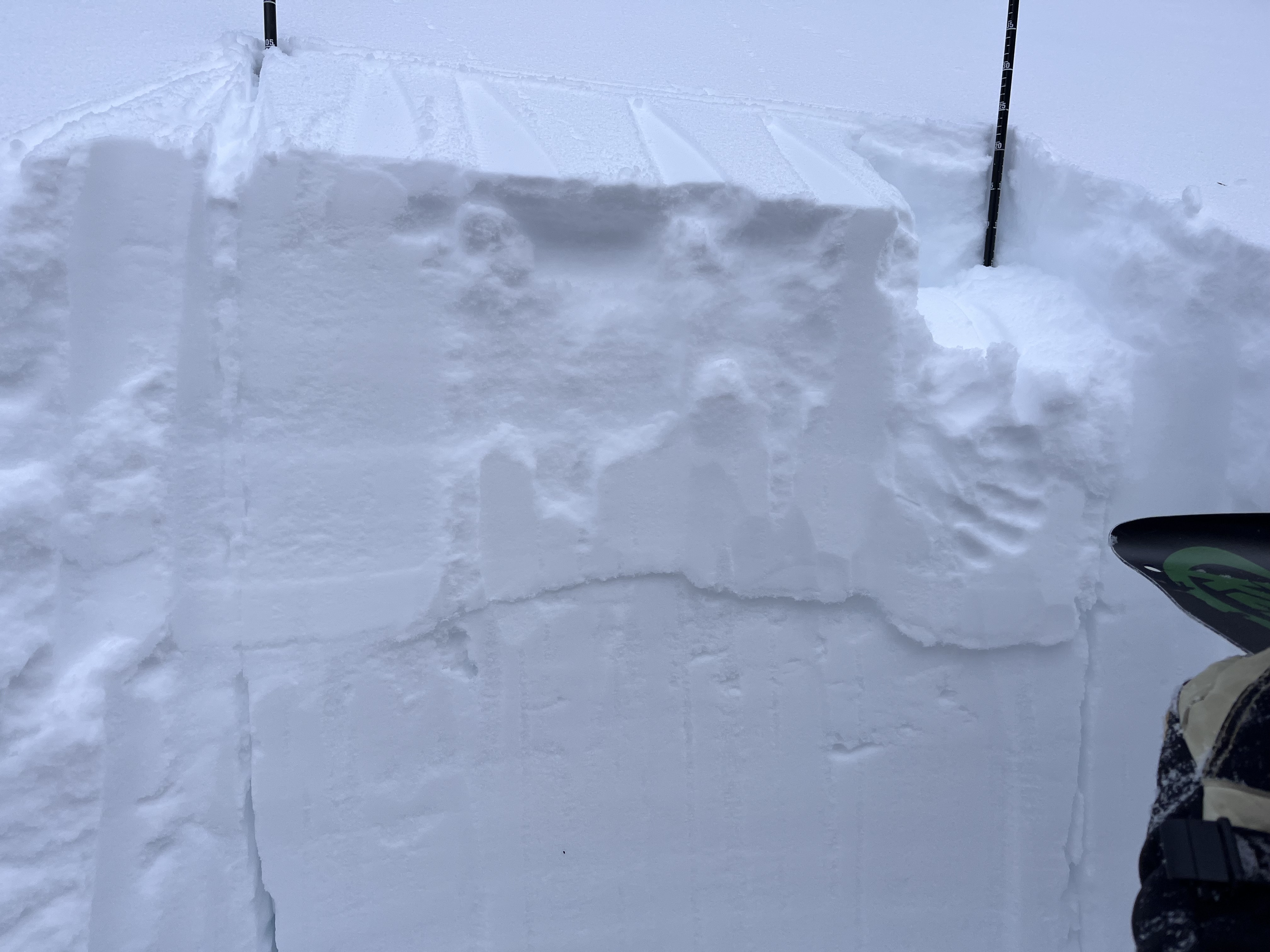 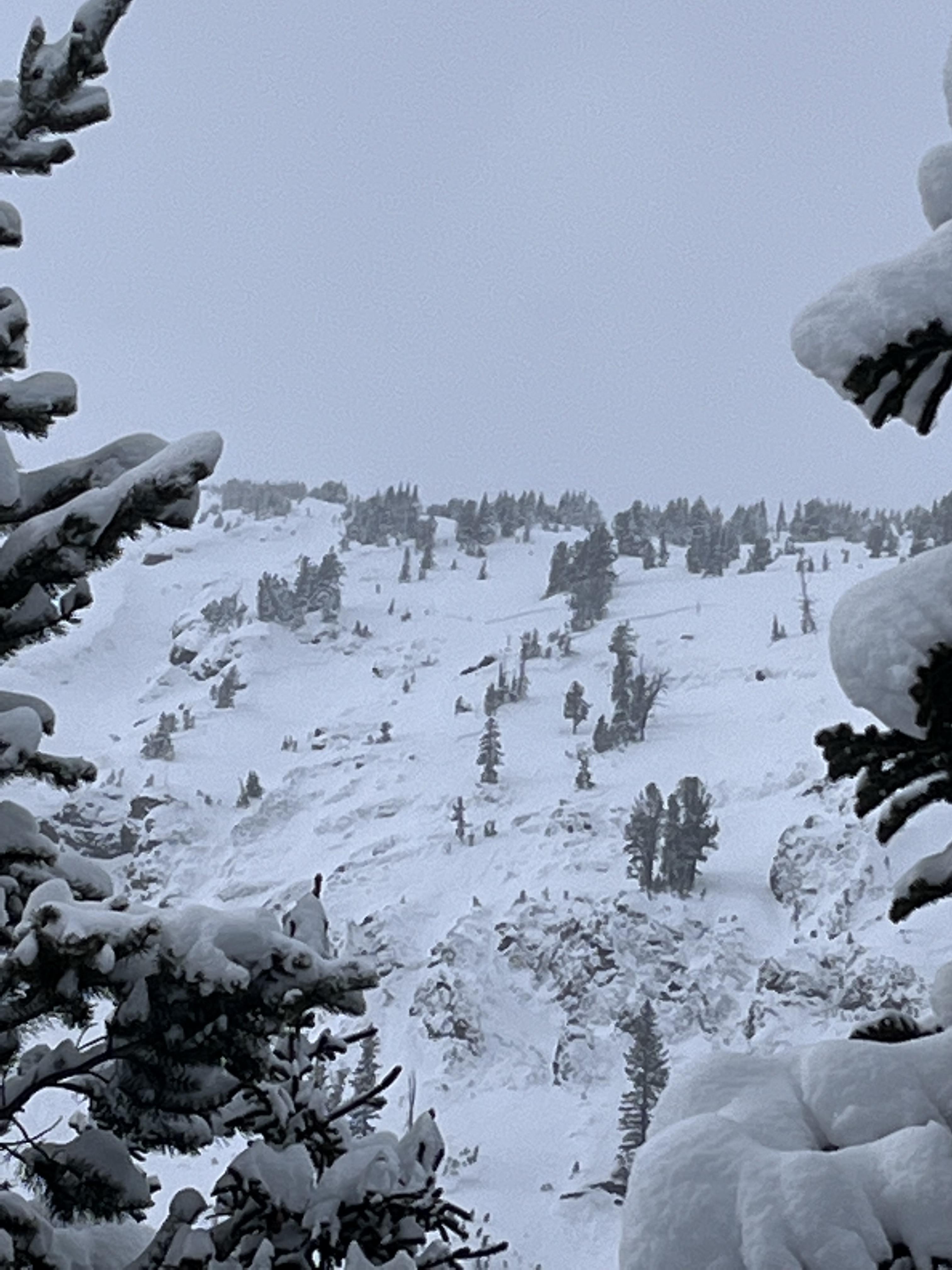 2-3 feet of new snow was reported above Round Lake in Cooke City. Many natural avalanches were seen on S-SE slopes. From afar they look to be breaking on new-old snow interface.

A skier triggered an avalanche about 20-30 yards wide and 2-4ft thick. 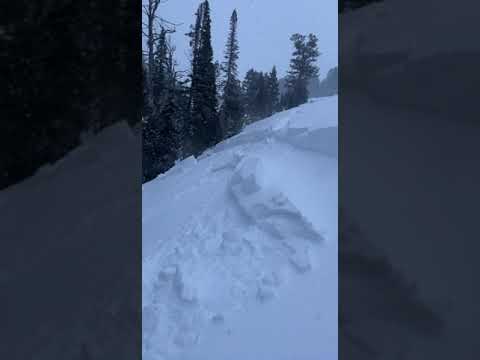 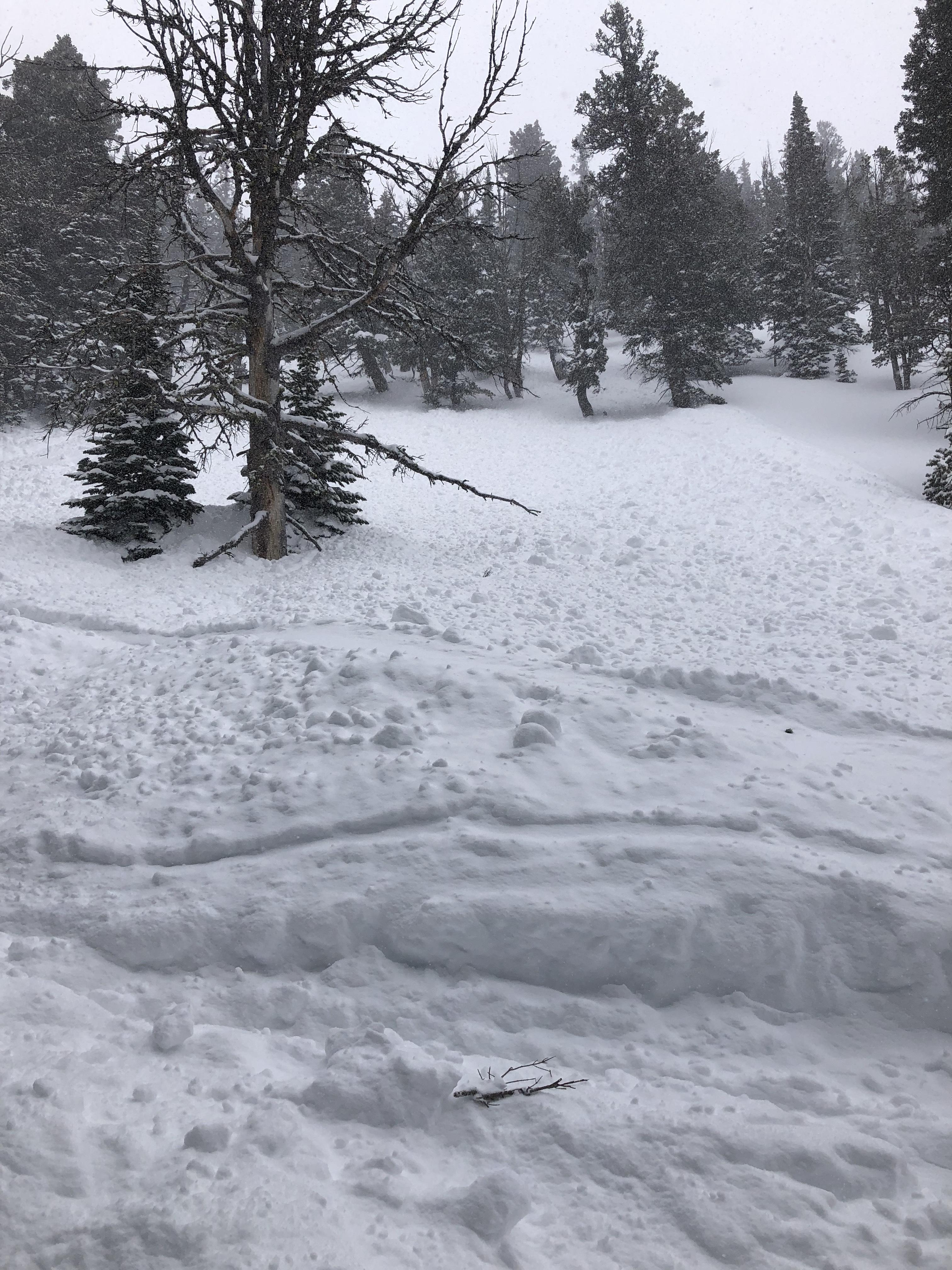 Made it out past round lake around 11am this morning - dug multiple hand pits  above 9400' to gauge new snow depth - 40-50 cm new snow from this storm, very light, over the hood riding!  Minimal wind below alpine, upper 20cm new snow collapsed easily in hand pits, very little cohesion in the new snow.

Observed several smaller avalanches, all in new snow, undetermined whether natural or ridder triggered, attached photo of the only slide I could get an alright photo of, vis was limited. 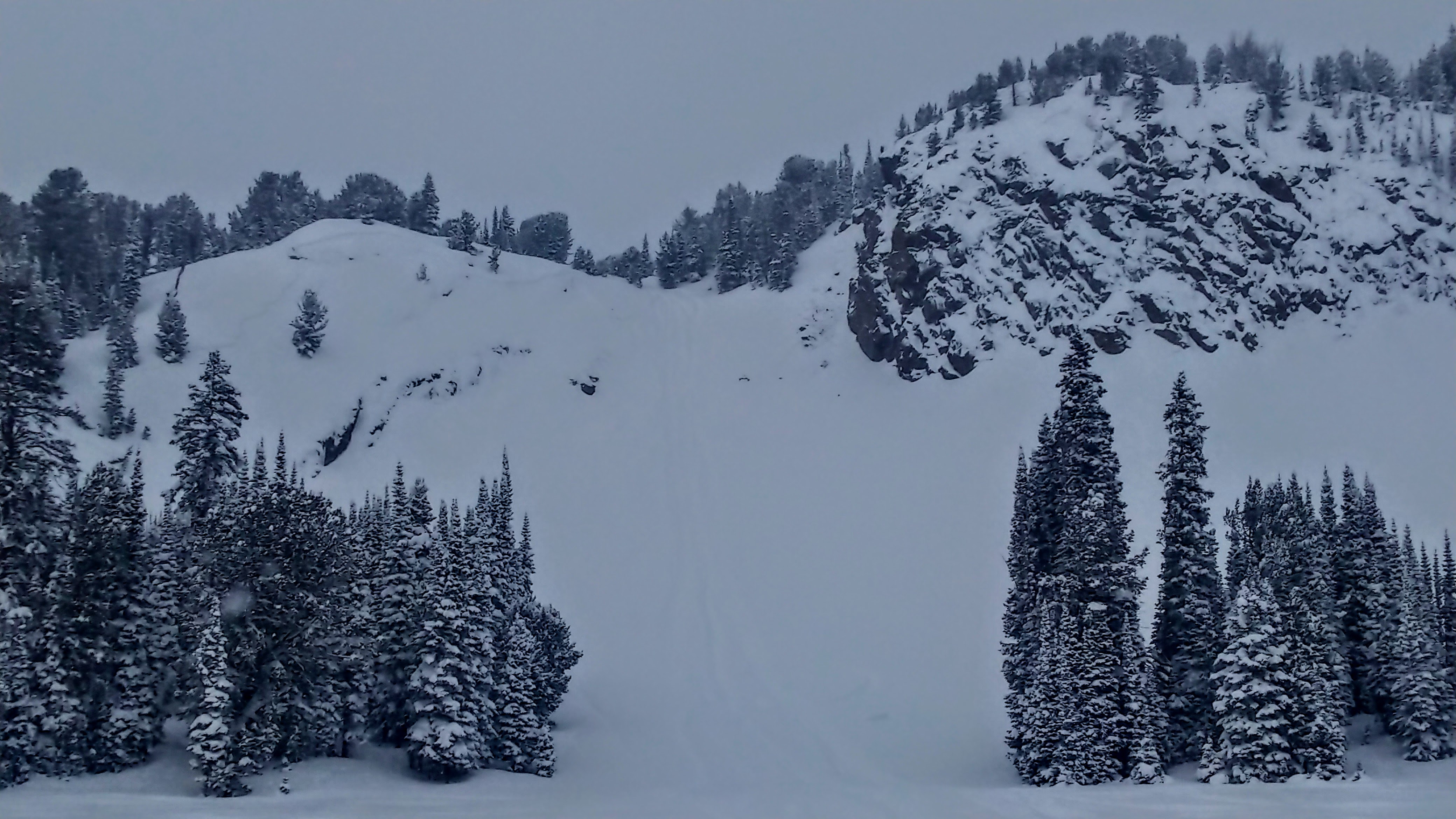 We went back to Buck Ridge to see how the big load of new snow was reacting. Rode through 1st, 2nd, and 3rd Yellowmule. Measured 13” of new snow with 0.6” SWE in 1st Yellowmule at 10 am. This brought the two day snow total to approximately 20”. Snowed all day with varying intensity and there were strong west winds along the ridge.

Visibility wasn’t great, but we saw most of the avalanche terrain in the Yellowmules. Saw one avalanche along the 2nd Yellowmule headwall that broke 100-150 ft wide just under the new snow (maybe 1-2 ft deep, it was hard to tell). Also saw a very small snowmobile triggered avalanche on a roadcut on the way out (6-12 inches deep, ~20 ft wide) that broke on facets in the thin snowpack. Rode many test slopes and got only very minor cracking. The new snow just wasn’t slabby even in the many places where it was wind affected.

With so much new snow (and having issued an avalanche warning), it was an easy decision to avoid all avalanche terrain today. Even after it stops snowing (likely sometime tonight) conditions will remain unstable and avalanches will be easily triggered for several days. The buried surface hoar layers will take longer to stabilize than new snow instabilities would by themselves. 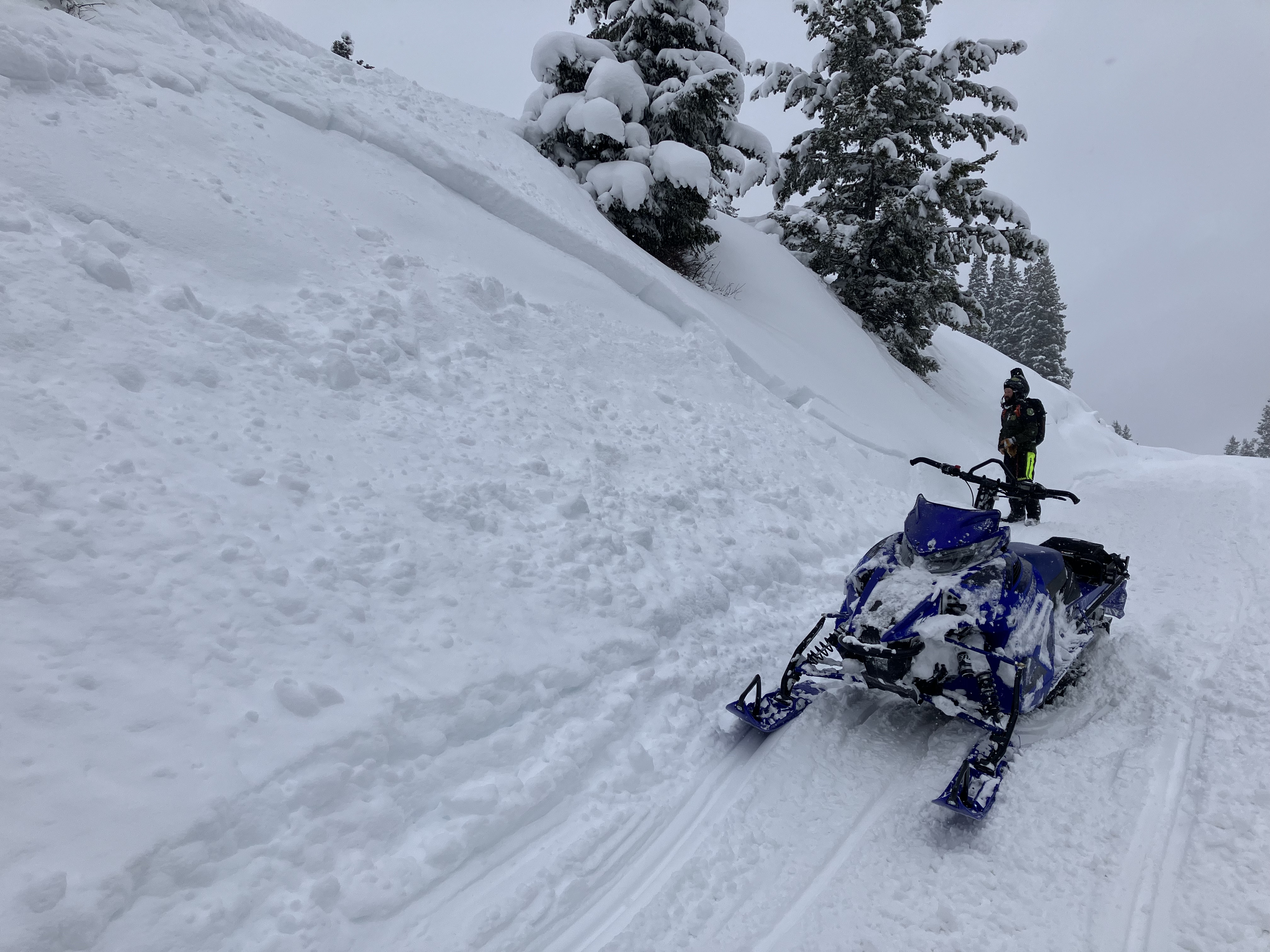 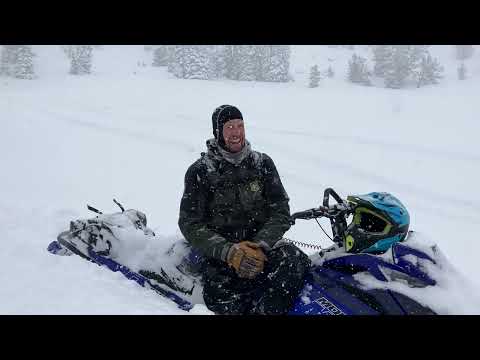 We Traveled to the Two Top area. Due to low visibility and new drifting snow Our snow pit location was in a lower tree covered elevation. We observed a surprisingly strong snowpack void of the obvious buried SH layers we found higher. With new snow available for transport and strong SW winds we observed wind loading on NNE aspects in the area.

The Buried SH layers are still present especially in higher elevation open slope areas. With the arrival of new snow, accompanied by strong winds the potential to form a wind slab over a PWL (Buried SH) could have serious consequence to riders in this area.

1 inch of new snow reported from the previous night.

Winter storm warning had been issued for the area. 18'' of new snow in higher elevations followed by strong winds. We observed new snow available for transport at all elevations

Heightened awareness of increasing avalanche danger with the arrival of this storm.

Our travel mindset for the day, to not travel in avalanche terrain over 30°.Due to low visibility, blowing and drifting snow our travel plan was impacted and our route was shortened. I learned later of 2 riders in the Keg springs area that dropped into Carrot canyon unable to get out due to a damaged Snowmobile they where rescued by Clark county SAR 03:30 this morning. All where cold tired but SAFE! A big thanks to Clark County SAR A reminder of the dangers of back country travel

Toured up between Flathead Pass and Ainger Lake/Bollywood Headwall. Three pits at different elevations and aspects summarized below.

Overall obs; soft snow in sheltered areas, particularly on E-->SE aspects above 7600' (and quite good skiing!); wind blasted crust on exposed N aspects and on ridge lines; below 7600' was very much survival skiing w/ bottomless facets and breakable crust (not such great skiing...); wind slabs on leeward slopes ~15-20cm thick, subtly stiffening through the day and shooting cracks ~5' from skis where wind slab present; strong winds out of generally the NW; cloud ceiling ~8400', ridge line was just barely obscured. 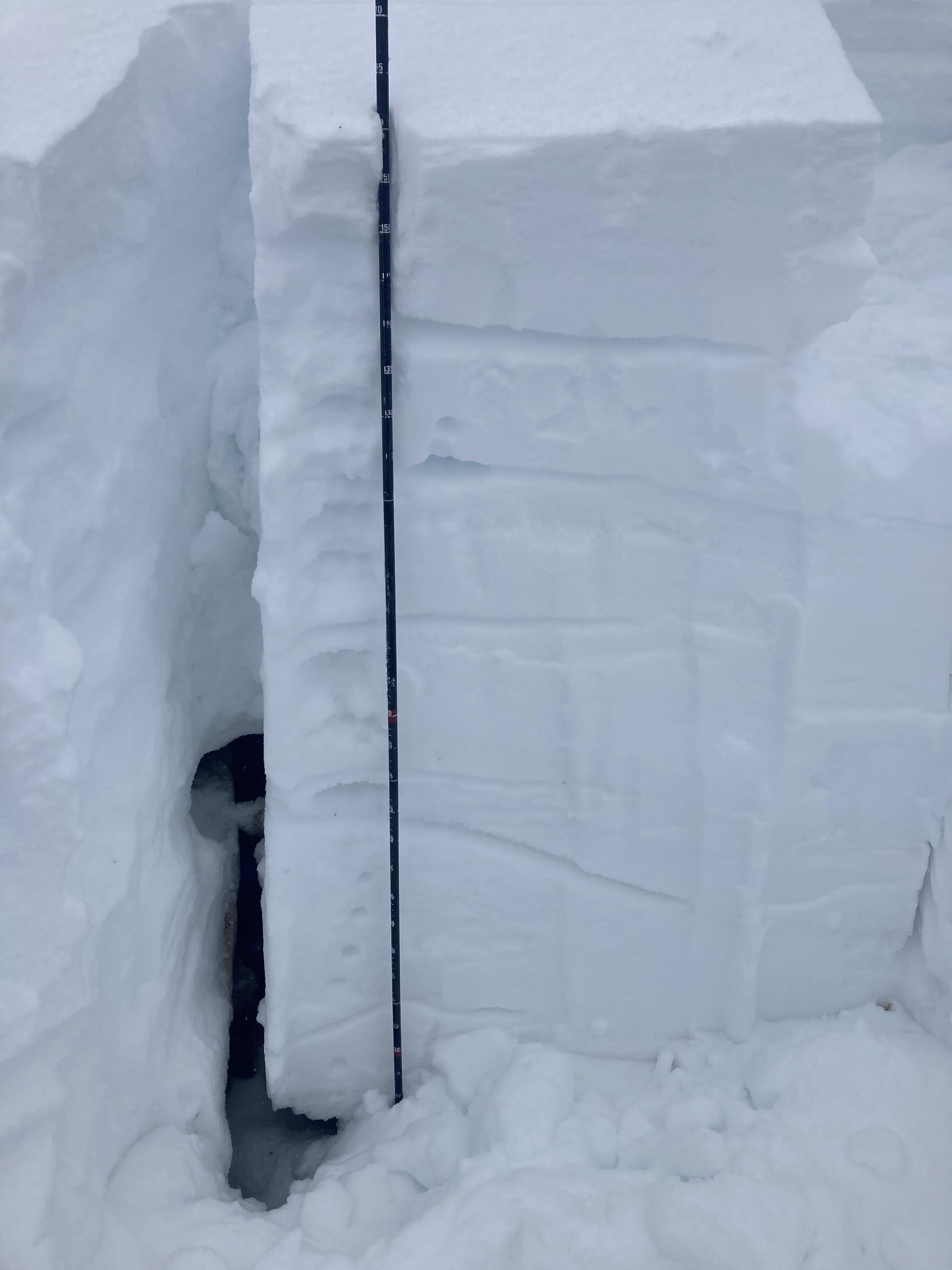 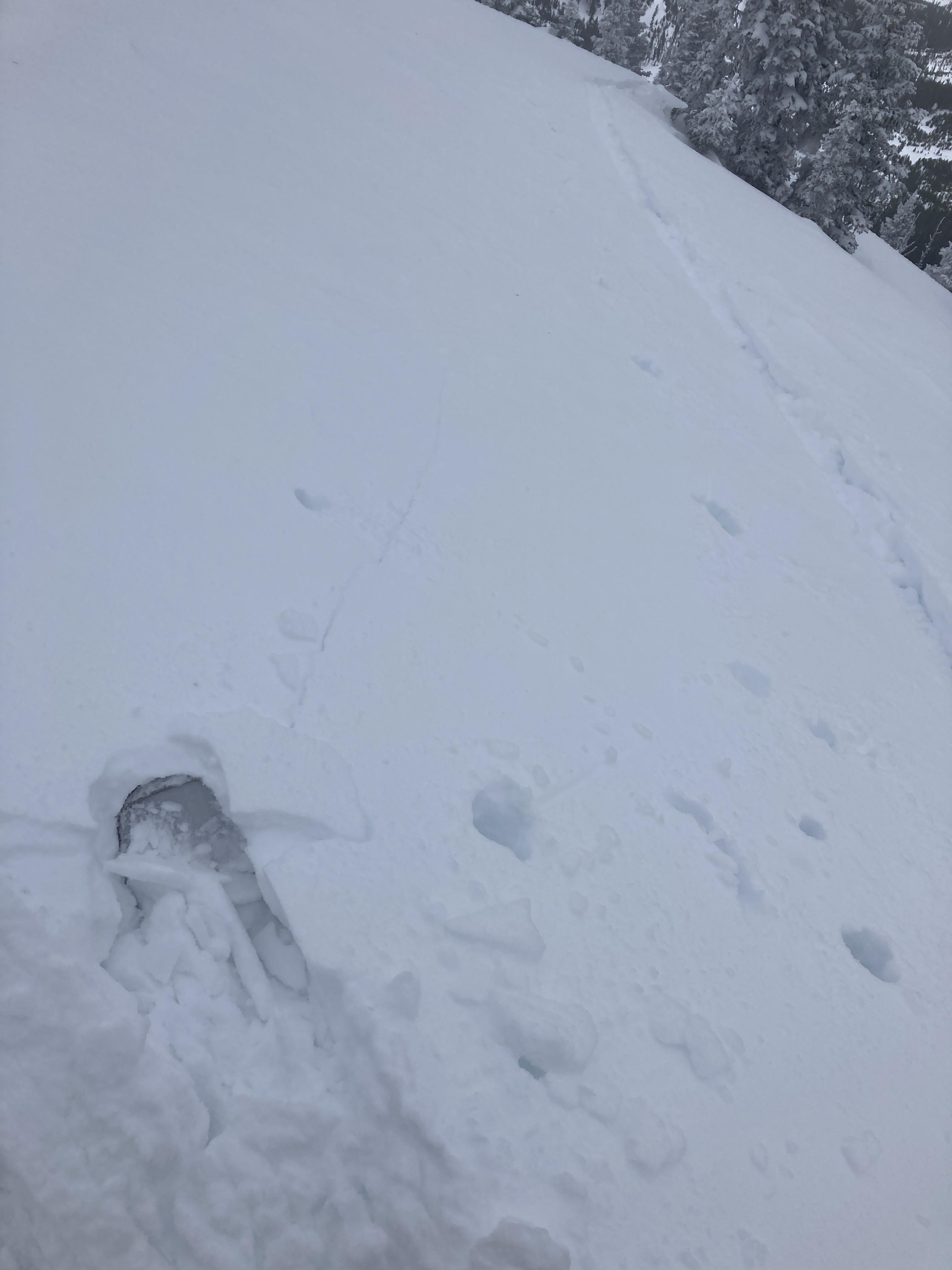 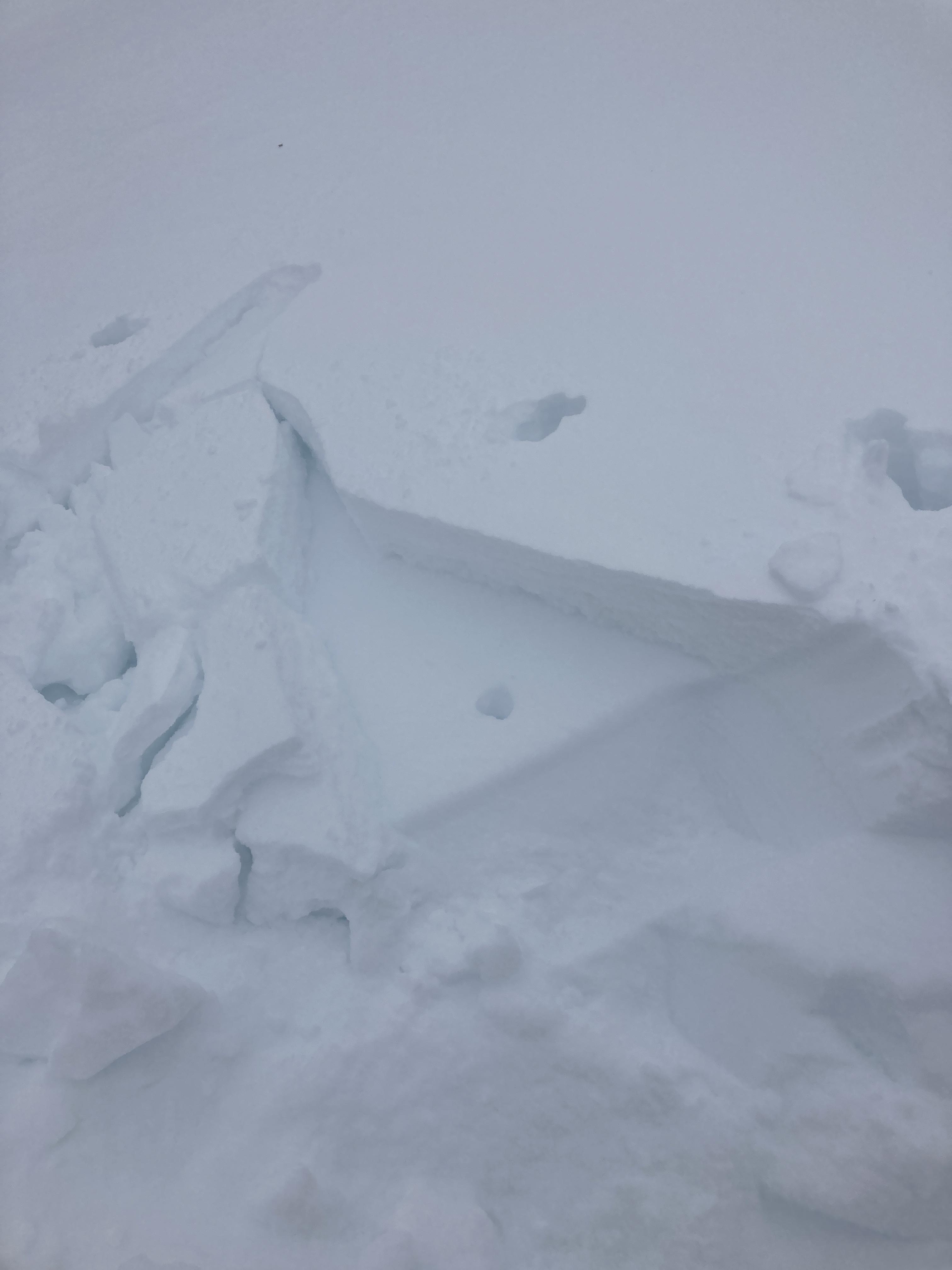 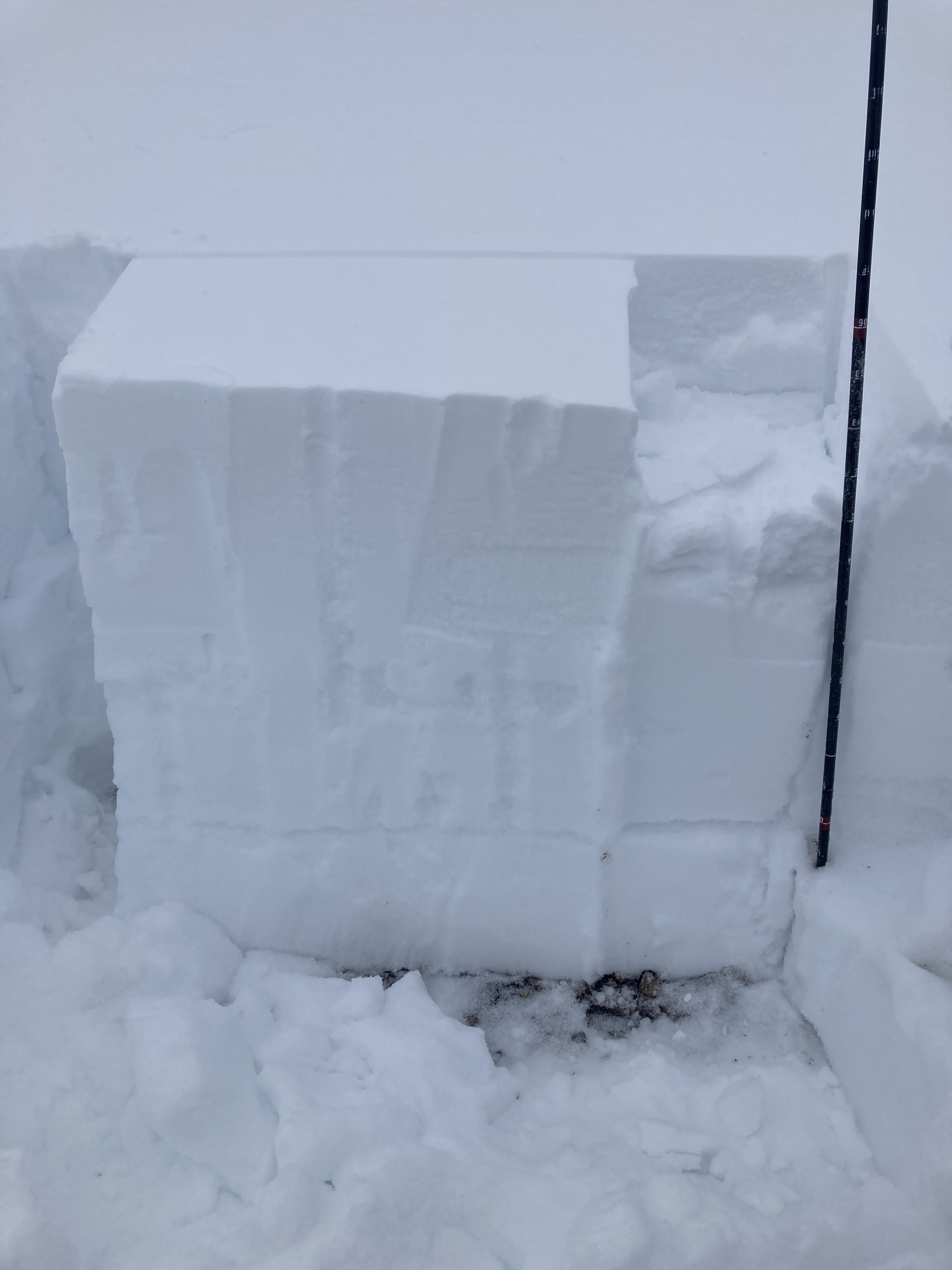 Skied from the summit of both Palace Butte and Maid of the Mist.  Based on seeing no signs of snow instability and good terrain selection we had a grand day in the mountains.  There was approximately 25 cms of new, dense snow.  The SW Montana faceted snow at the ground resides every where we skied and snow above this layer is obviously well bonded.