Good Morning. This is Dave Zinn with the Gallatin National Forest Avalanche Forecast on Monday, December 21st at 7:15 a.m. This forecast is sponsored by World Boards and Mystery Ranch. This forecast does not apply to operating ski areas.

New snow and wind drifted snow loading a weak foundation of sugary facets has created dangerous avalanche conditions in the mountains around West Yellowstone. Doug and I rode to Ski Hill yesterday and triggered two avalanches by walking across the top of the slope. These avalanches released 30-75' below us, propagated and ran well into the trees below (video, photo, photo). Yesterday's 3" of new snow (0.3" of snow water equivalent - SWE) will keep the snowpack at its breaking point. Stay off and out from under steep slopes being extra cautious around drifted slopes that will be hair-trigger today.

The danger is rated HIGH on wind-loaded slopes and CONSIDERABLE on all other slopes.

Cooke City received 6" of new snow (0.4" SWE) in the last 24 hours bring the storm total to 10" (0.7" SWE). Skiers and riders are reporting more snow at higher elevations with avalanches breaking within the new snow. Yesterday, a natural avalanche released 18" deep across Astral Lake from a group assessing the snowpack (photo). This avalanche told the group what they needed to know about the stability and should inform your decisions as well. Cooke City does not have widespread weak layers and avalanches breaking deeper in the snowpack are unlikely (video). However, avalanches involving the new snow alone are large enough to bury or kill a skier or rider. Route selection designed to avoid steep terrain and thorough snowpack assessment is vital today as human triggered avalanches are likely and natural avalanches are possible and the avalanche danger is rated CONSIDERABLE.

The Gallatin and Madison Ranges haven’t received much new snow, but strong winds formed unstable snowdrifts on top of a weak layer of faceted snow (video). A skier in Beehive had a scare when a cornice collapsed unexpectedly, triggering the slope below (photo, photo). In Hyalite, climbers and skiers reported small natural avalanches on the west-facing slope of Overlook Mountain and near Hyalite Peak with wind-blown snow continuing to drift (photo). A group of riders at Buck Ridge got consistently unstable test results on wind-drifted slopes. Watch for cracking around your skis or sleds and avoid steep wind-drifts where human-triggered avalanches are likely.

The danger is rated CONSIDERABLE on wind-loaded slopes and MODERATE on all other slopes.

Recent storms have missed the Bridger Range, but strong winds transported the remaining soft snow into stiff drifts where human-triggered avalanches are possible in steep terrain (photo, video). These drifts will take longer to stabilize because the snowpack's foundation is a weak layer of sugary facets that have demonstrated their inability to support a load in other ranges. Assess slopes for wind-drifting by feeling for a hollow or drum-like upper layer and watching for shooting cracks or active drifting. Turn around if you find them and search for softer snow.

Today the avalanche danger is MODERATE on wind-loaded slopes and LOW on other slopes.

There have been four avalanche fatalities in the mountains of CO and WY since Friday. We are deeply saddened by these events. You can find preliminary reports at https://avalanche.state.co.us/accidents/us/ 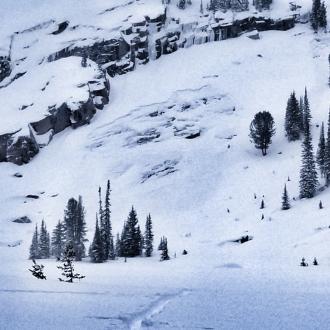 This avalanche released while we were across Astral Lake digging snow pits today. South aspect 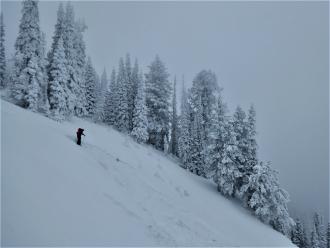 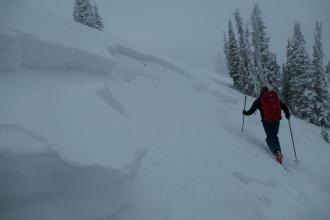 We triggered this avalanche from 50 feet away. We were walking on a low-angle slope