Good Morning. This is Dave Zinn with the Gallatin National Forest Avalanche Forecast on Tuesday, December 22nd at 7:15 a.m. This forecast is sponsored by Alpine Orthopedics & Sports Medicine and Yellowstone Ski Tours. This forecast does not apply to operating ski areas.

In the last 24 hours, Cooke City received 11" of new snow with 1-2" near West Yellowstone and none elsewhere. Winds are 15-30 MPH from the south to the west with gusts hitting 70 MPH and temperatures are near or above freezing. Temperatures will drop through the day, winds will shift from the southwest to northwest at 20-30 MPH, and new snow will begin falling later this morning. The mountains around Cooke City, West Yellowstone and Big Sky will get 6-8" by morning with 2-4" in the mountains around Bozeman.

Yesterday Cooke City received 11" of new snow (1.1" snow water equivalent - SWE). This brings the storm total to 20" (1.8" SWE) since Sunday. The wind is blowing 20-30 MPH with gusts of 65 MPH building very unstable drifts of snow where natural avalanche activity is likely, but you won't need to differentiate as human triggered avalanches will be likely on all slopes. Yesterday, skiers triggered "whumphs," observed shooting cracks from their skis, and the day before, others observed natural avalanche activity (photo, photo). With more snow falling, today will be more dangerous. This is the largest loading event of the year for Cooke City and dangerous avalanche conditions exist on all slopes.

Avoid steep terrain and stay away from avalanche runout areas by playing in the flats while the snowpack has time to adjust to the new snow's weight. The danger is rated HIGH on wind-loaded slopes and CONSIDERABLE on all other slopes.

The mountains around West Yellowstone have a very weak snowpack. This week we triggered avalanches on Ski Hill and others triggered and observed avalanches in Cabin Creek and Tepee Creek (video, photo, photo). Yesterday's 2" of new snow (0.2 SWE) is enough to keep the snowpack on the edge and human triggered avalanches are likely. Stay off and away from the bottom of steep slopes and out of gullies in favor of low-angle terrain. The avalanche danger will rise as snowfall begins later this morning. Avalanches, collapsing, and shooting cracks are all signs that the snowpack is unstable and needs time to adjust. We have observed all these signs in the last couple of days.

The danger is rated CONSIDERABLE and human-triggered avalanches are likely.

The Madison Range and the Southern Gallatin range did not receive significant new snow in the last 24 hours. The snowpack is adjusting, but persistent weak layers like the sugary facets making up our snowpack's foundation take time to do so. Yesterday, Alex and I rode into the Taylor Fork and saw natural avalanches adding to the list of natural and human-triggered avalanches from this weekend (avalanche activity list). We got unstable test results on a neighboring slope (video, photo, avalanche activity). Human-triggered avalanches remain possible today and the avalanche danger will rise as snowfall begins later this morning. Carefully assess the snowpack and the consequences of the terrain before considering riding or skiing on steep slopes.

The avalanche danger is rated MODERATE.

The snowpack structure in the Bridger and Northern Gallatin Range is weak (Ramp profile) and winds have gusted up to 70 MPH in the last 48 hours, creating hard slabs of wind drifted snow on top of sugary facets. Natural avalanches occurred on these heavily wind-loaded slopes over the weekend in the Northern Gallatin Range (photo, photo) and the Bridger Bowl Ski Patrol triggered several of these avalanches during routine mitigation efforts yesterday (photo). Without new snow, these slabs will be harder to trigger but human-triggered avalanches remain possible on wind-loaded slopes. If you are standing on a hard, drum-like snow surface or see cracks coming from your skis or sled, turn around and seek the softer snow of non-wind-drifted slopes. The avalanche danger will rise as snowfall begins later this morning.

The danger is rated MODERATE on wind-loaded slopes and LOW on all others.

There have been four avalanche fatalities in the mountains of CO and WY since Friday. We are deeply saddened by these events. You can find preliminary reports at https://avalanche.state.co.us/accidents/us/ 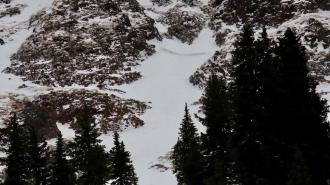 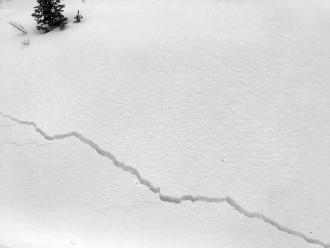 From email: "Lots of collapsing and cracking throughout the day. At least a dozen big collapses for 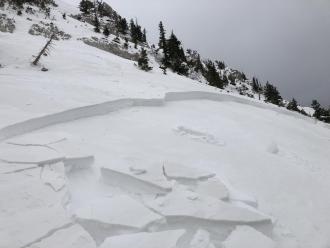 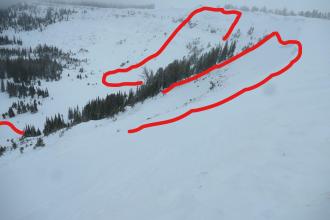