Good morning. This is Ian Hoyer with the Gallatin National Forest Avalanche Forecast on Friday, December 30th at 7:00 a.m. This information is sponsored by Blitz Motorsports and Yamaha and Archer Construction. This forecast does not apply to operating ski areas.

There are 8” of new snow in the Lionhead area, 2” in the Taylor Fork, and no new snow across the rest of the advisory area. Winds are southwest and west at 15-20 mph with gusts of 25-40 mph. Temperatures are in the teens F. Temperatures will rise into the 20s and low 30s F. Winds will continue out of the southwest and west at 15-25 mph with gusts into the 30s mph. Snowfall today and tonight will bring up to 2” of new snow near Big Sky, 3-6” around West Yellowstone and Cooke City, and just a trace around Bozeman.

Weak layers being loaded by more new snow and wind drifting make for dangerous avalanche conditions. There is a weak layer buried just beneath this week’s new snow and another in the lower third of the snowpack (Lionhead video). Both layers have been overloaded by the new snow and will continue to be loaded with more new snow on the way today. Expect to trigger avalanches on these layers if you get onto steep slopes. You could also trigger a slide from below, so give steep slopes a wide berth if you’re crossing beneath them. Don’t try to outsmart the avalanche hazard - stick to mellow slopes where you’ll be able to safely enjoy the fresh snow. Human triggered avalanches are likely today and the avalanche danger is CONSIDERABLE.

Triggering large avalanches remains possible today. Slides can break on two weak layers, one  about a foot under the surface and another near the ground (Taylor Fork video). These layers were loaded by new snow over the past few days and winds have been drifting that fresh snow into thicker slabs. Avalanches broke naturally on these weak layers earlier in the week and the weight of a skier or rider could tip the scales to trigger similar slides today (Sage Basin avalanche, Saddle Peak avalanche). The weak layer near the ground is somewhat less widespread near Cooke City, but is there in places and has shown itself to be dangerous (Fisher avalanche). Look for signs of instability (cracking, collapsing, recent avalanches, poor stability test scores) and back off steep slopes if you find them. Tracks on a slope do not indicate stability - only that nobody has hit just the wrong spot yet. Even if you don’t see clear signs of instability, tilt the odds in your favor by riding one at a time and thinking carefully about the consequences of triggering a large avalanche before riding steep slopes. The avalanche danger is rated MODERATE.

In Island Park, weak layers being loaded by more new snow and wind drifting make for dangerous avalanche conditions. Expect to trigger avalanches today if you get onto steep slopes. You could also trigger a slide from below, so give steep slopes a wide berth if you’re crossing beneath them. Don’t try to outsmart the avalanche hazard - stick to mellow slopes where you’ll be able to safely enjoy the fresh snow.

In Colorado on December 26th 4 backcountry tourers were caught, 2 fully buried, and 1 killed. Four people were on the slope at the same time. Let’s all pause and learn from this tragedy. 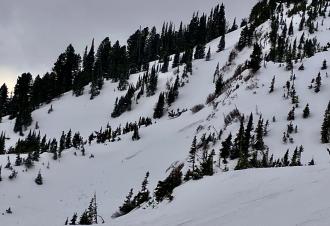 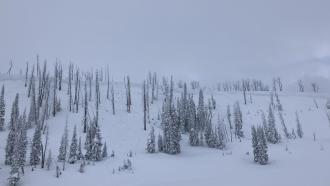 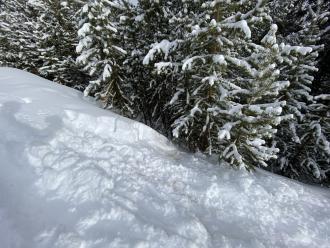 Snowpack at 8000 ft in pioneers is about 2 feet deep and mostly facets. About