Good morning. This is Doug Chabot with the Gallatin National Forest Avalanche Forecast on Thursday, December 29th at 6:45 a.m. This information is sponsored by FUGOWIE Snowmobile Club, Klim and Advanced Innovation. This forecast does not apply to operating ski areas.

Yesterday, 3” of snow fell around Big Sky and 1-2” everywhere else. With temperatures in the single digits to low teens F, wind is blowing W-SW at 10-20 mph with gusts of 35 mph. Today will be sunny in the northern ranges and partly cloudy in the south. Mountain temperatures will rise into the high teens and W-SW wind will remain 10-20 mph. By morning the mountains around West Yellowstone and Cooke City could have a trace to 1” of snow.

The avalanche warning in Lionhead has expired. Yesterday, Ian and I rode into Taylor Fork to analyze the snow (observation and video). There are 2 weak layers: one about a foot from the surface (video, photo) and another in the lower third of the snowpack. Both consist of sugary facets with the upper layer being the most unstable. Our stability tests bore this out with the upper layer easily breaking, but the real evidence was an avalanche in Sage Basin and a large whumpf (collapse) from our body weight.  Visibility was poor, yet this one avalanche confirmed that slopes are dangerous. The same unstable ingredients exist in Lionhead and Bacon Rind.

It is not unusual to have avalanche deaths the day after an avalanche warning. While the snowpack is a little more stable, folks tend to lose their minds in the fresh powder and sunshine. Stay focused and realize that traveling in avalanche terrain today carries significant risk. Triggering avalanches remains likely and the avalanche danger is rated CONSIDERABLE on all slopes.

The mountains around Cooke City have a weak layer of faceted snow buried 1-2 feet under the surface. These sugary grains do not stick together and are breaking in stability tests (observation), and more significantly, avalanched on a small slope that was intentionally triggered by a snowboarder on Monday (observation and photos). These mountains also have a weak layer near the ground that could be triggered from thin snow cover. An avalanche breaking deep would be large and deadly. In general, releasing avalanches on either of these layers is possible, just not on most slopes. This is our conundrum: riding on steep slopes without consequence does not indicate stability. Be careful, only ride or ski one at a time, and look for signs of instability (cracking, collapsing, recent avalanches, poor stability test scores). For today, the avalanche danger is rated MODERATE on all slopes.

The mountains around Bozeman and Big Sky have 2 layers of sugary, faceted snow on many slopes. One is a foot under the surface and another is near the ground. On Monday, skiers near Big Sky triggered a collapse (whumpf) which is a sign of instability (observation). Skiers also found unstable snow on Divide Peak yesterday (observation) which matched Dave’s findings on Mt. Blackmore (video) and Alex’s field day on Buck Ridge (video). Tuesday’s snow and strong wind has loaded these weak layers. Dig and assess steep slopes, and only expose 1 person at a time to avalanche terrain. For today, triggering avalanches is possible and the danger is rated MODERATE.

The avalanche warning in Island Park has expired. Weak layers in the snowpack remain dangerous. It is not unusual to have avalanche deaths the day after an avalanche warning. While the snowpack is a little more stable, folks tend to lose their minds in the fresh powder and sunshine. Stay focused and realize that traveling in avalanche terrain today carries significant risk.

Loss in the Outdoors, for those who have been affected by grief and loss related to outdoor pursuits. Check out the link for more information.

In Colorado on 26 December: 4 backcountry tourers caught, 2 fully buried, and 1 killed. Four people were on the slope at the same time. Let’s all pause and learn from this tragedy. 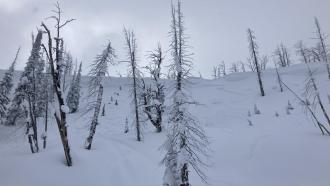