Good morning. This is Ian Hoyer with the Gallatin National Forest Avalanche Forecast on Saturday, March 26th at 6:45 a.m. This information is sponsored by Cooke City Super 8/Bearclaw Bob’s and Montana State Parks. This forecast does not apply to operating ski areas.

Mountain temperatures early this morning are in the 30s F - mostly above freezing. Winds are 10-20 mph out of the west with gusts of 30-40 mph. Clouds will clear this morning and today will be mostly sunny. Moderate west winds will continue. High temperatures will be in the 40s F and potentially low 50s F. Tomorrow is forecast to be even warmer.

Avalanche conditions today will become very dangerous as the day heats up.

Temperatures overnight stayed above freezing or dropped just barely below freezing, which means that the snow surface will only have a thin crust this morning. High temperatures today will be 5 or more degrees warmer than yesterday’s. These temperatures will quickly break down any crusts which formed overnight. Mostly sunny skies mean the strong late March sun will bake the snow surface and ramp up meltwater production. As meltwater starts to percolate down it will hit weak layers and crusts in the upper snowpack that will pool the water and destabilize quickly when they get wet. The combination of these factors is setting us up for dangerous conditions today. Moderate winds may help provide some cooling effect, but they will likely be overwhelmed by the other factors. Be particularly wary of steep, low elevation slopes sheltered from the wind, especially as it’s getting later in the afternoon. Make plans that avoid steep, sunny slopes as the day warms.  If you’re sinking more than ankle deep into wet snow, it is time to move to shadier, lower angled slopes, or just head home (video). Expect to trigger loose wet avalanches (which may start gouging deep into the snowpack and picking up significant volume) and wet slab avalanches are becoming a real possibility as well.

Yesterday, Alex and Dave investigated Thursday’s skier triggered avalanche on Woody Ridge, near Cooke City (photo, video). They found that while the snow surface was wet, the rest of the snowpack was dry and the avalanche broke on the same weak layers we’ve been concerned about for months. Additionally, several other new slab avalanches were reported yesterday on sunny slopes around Cooke City that likely broke on these same weak layers (photo, details). Melting surface snow is destabilizing the snowpack even on slopes where meltwater hasn’t yet reached the widespread weak layers. Even shady slopes require careful snowpack assessment as avalanches on these weak layers are still possible there.

Don’t push your luck today. Make conservative route plans and be ready to turn around early if conditions are worse than anticipated.

The avalanche danger is MODERATE this morning and will rise to CONSIDERABLE as the day heats up this afternoon.

This article in the Billings Gazette highlighting Dave’s January accident, shoulder injury and rescue is worth your time. Plan ahead and prepare for dealing with an injury in the backcountry and think about how you’d call for outside help. 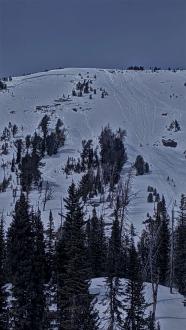 Slab avalanche on Mount Abundance. Observed 3/25/22. It either broke naturally or was remotely triggered 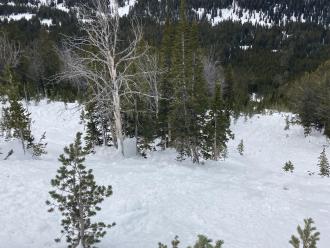 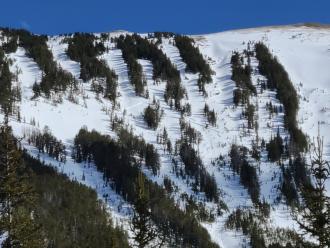 Slab avalanche that caught three skiers and partially buried one in Republic Creek, south of