Good Morning. This is Dave Zinn with the Gallatin National Forest Avalanche Forecast on Thursday, December 16th at 7:00 a.m. This information is sponsored by the Upper Yellowstone Snowmobile Club, Gallatin Valley Snowmobile Association and Klim. This forecast does not apply to operating ski areas.

West Yellowstone and the Southern Madison Range picked up 1” of snow yesterday before the storm exited and the rest of the advisory area remained dry. Winds are 10-20 mph from the west to southwest and temperatures are in the single digits F. Today, temperatures will climb into the mid-teens F with 5-15 mph winds from the southwest. A smaller storm moving south to north will begin this morning with 4-6” of snow in Cooke City and 2-4” falling everywhere else by tomorrow morning.

This week’s storm total in the Lionhead area, and Southern Madison and Southern Gallatin Ranges reached 32” of snow with 2.7-2.9” of snow water equivalent (SWE). Yesterday, in the Taylor Fork, Ian and I triggered a small avalanche on the first steep slope we approached while still 100’ away. We saw many natural avalanches that broke 2-3’ deep during the storm (video, details). A skier nearby in Bacon Rind triggered an avalanche on a steep slope while he was in the flat terrain above (details, photo). On Sunday, I triggered a large collapse in a drift of snow on Lionhead Ridge (video). This is all the information we need to make decisions right now, steep slopes loaded by nearly 3’ of snow since Saturday are unstable and need time to stabilize before we consider entering avalanche terrain.

Human-triggered avalanches are likely, and the danger is rated CONSIDERABLE on all slopes.

The Northern Gallatin, Northern Madison and Bridger Ranges received 8-10” of snow equal to 0.6-0.9 SWE Tuesday night. Bridger Bowl Ski Patrol noted 17” of snow at the top of the Bridger Chairlift. The Big Sky Ski Patrol triggered “very reactive” slabs at the interface between the old and new snow during routine avalanche mitigation. Skiers noted a small slide on a road cut on their way up the East Fork of Hyalite Creek (Photo) and skiers at Bridger Bowl, where backcountry conditions exist, noted a couple of small natural slides. Two days ago, a skier triggered a small wind-slab avalanche near the Ramp. Snow fell on a generally stable snowpack and our primary concern is new snow avalanches especially in areas with recent drifting. Slides breaking on deeper weak layers are unlikely without additional loading (Bridgers video).

Human-triggered avalanches are possible and the danger is MODERATE.

Cooke City received 17-20” of snow since Saturday equal to 1.7” SWE with winds consistently transporting snow into slabs. Avoid these wind-loaded slopes where skiers yesterday observed cracking and collapsing and got unstable test results. Turn around if you see similar indicators of instability today. Avalanches are unlikely to fail on the deeper weak layers that Alex and Ian described in last week’s videos but dig down and test these layers to avoid any nasty surprises (Cooke City video 1, Cooke City video 2).

Every Saturday near Cooke City, 10a.m.-3p.m. FREE snowpack update and transceiver/rescue training. Stop by for 20 minutes or more. At the Round Lake Warming Hut.

The Friends of the Avalanche Center are hosting the Virtual Powder Blast fundraiser. With only $2,000 left to go, help us reach the $65,000 goal. Your donations support free and low-cost avalanche education, beacon checkers at trailheads, beacon parks, weather stations, and GNFAC programs!

Sadly, on Saturday a group of skiers was caught in an avalanche in the backcountry near Crystal Mtn., Washington and one person was killed. Link to Article. Our deepest condolences go out to those affected by this tragic event. 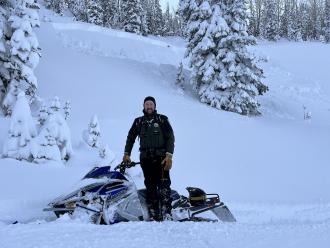 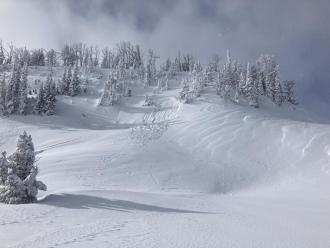 This avalanche was remotely triggered by snowmobilers from over 100 ft away on 12/15. It broke 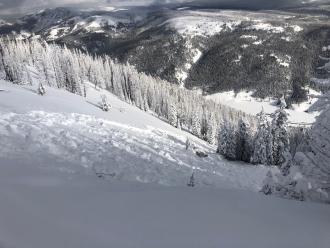