Good Morning. This is Dave Zinn with the Gallatin National Forest Avalanche Forecast on Wednesday, February 10th at 7:30 a.m. Today's forecast is sponsored by Summit Motorsports and Ski-Doo and Cooke City Super 8/Bearclaw Bob’s. This forecast does not apply to operating ski areas.

Temperatures this morning are in the single digits above and below 0 F with 10-20 mph winds from the west except in the Taylor Fork where they are blowing 30 mph. There is no new snow.

High temperatures today will be around 10 F except in balmy West Yellowstone where they will get to 20 F. Winds will be 15-20 mph from the west to southwest and the mountains around Bozeman and Cooke City will get 1” of new snow.

We are a day and a half removed from a six-day storm that dropped 3-4’+ of new snow equal to  2.7-3.9”  of snow water equivalent-SWE across the Bridger, Madison, and Gallatin Ranges. 10-20 mph winds (30 mph in the Taylor Fork) are building thick slabs of drifted snow that will crack and avalanche under the weight of a skier or rider and are adding stress to a snowpack with multiple persistent weak layers. Doug, Ian, and I were spread across the Northern Madison Range yesterday and saw many recent avalanches. They failed on all aspects and elevations, some were big, some were small, but all would have been dangerous to a skier or rider (Buck Ridge video, Muddy Creek video, large avalanche details, small avalanche details). The story is the same in the Gallatin Range (photo) and the Bridger Range (Bridger Peak photo, Baldy Photo). Obtain details about dozens of avalanches occurring in the last five days on the Avalanche Activity Page of our website.

Today, human-triggered avalanches breaking 1-2’ deep are likely on slopes with thick drifts of recently wind-loaded snow, it is possible they will fail deeper on buried weak layers. Avalanches breaking on buried weak layers remain possible on all steep slopes. Careful route finding will minimize exposure to consequences of slides as we wait for the snowpack to adjust. The danger is CONSIDERABLE on wind-loaded slopes and MODERATE on all others.

Wind in the mountains around Cooke City is moving the 3-4’ of soft snow from the recent storm over ridges and across slopes creating slabs of snow where human-triggered avalanches are likely. Earlier in the week, a group of skiers near Sheep Creek triggered one of these slopes from a long distance away and watched as it ran down to the drainage (photo and details). Last Friday, a skier was caught and partially buried in a slide above Hayden Creek (photo and details). Look at our photos page for many images of slides around Cooke City. Avoid steep wind-loaded slopes and carefully assess the snowpack and consequences of a slide before entering non-wind-loaded avalanche terrain. The danger is rated CONSIDERABLE on wind-loaded slopes and MODERATE on all others.

Human-triggered avalanches are possible in the mountains around West Yellowstone where 2 feet of snow fell last week. Multiple persistent weak layers buried under a growing slab of snow take time to fully adjust (Lionhead video). This weekend, a rider escaped being caught by an avalanche near Targhee Creek (photo). Evaluate the consequences of being caught in a slide and look for signs of instability before entering steep terrain. Be cautious especially on and under terrain with new slabs of wind-drifted snow. With no recent snowfall, the likelihood of triggering an avalanche is going down. The danger is rated MODERATE.

Since last Sunday there were 16 avalanche fatalities in the U.S. The most in one week in the U.S. since 1910 (NYT article). On Saturday in Utah, 8 skiers were caught and 4 were killed. Three events in the last week involved multiple burials and deaths. Our deepest condolences go out to the family and friends of those involved in all the recent events. More info at: avalanche.org/avalanche-accidents/

With this deep snow also be cautious of snow immersion/suffocation. From a skier in Hyalite Saturday: “[skied] low angle slopes - but keeping the terrain mellow meant our biggest concern was deep snow immersion/tree wells... which were REAL hazards today. At one point I had an odd prerelease, crashed and ended up slightly head down choking on snow and thankfully my partner was close and able to help right me.” 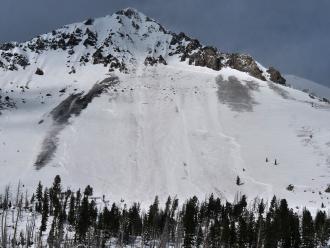 A natural storm slab avalanche on a wind-loaded slope west of Cooke City. Photo: B 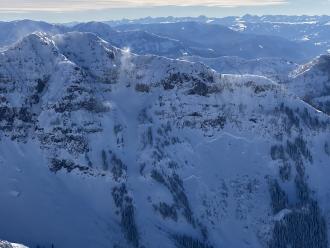 From Obs 2/9/21: "Up/down the SE Ridge of Blackmore today. No cracking/collapsing observed. One large avalanche 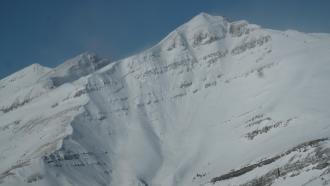 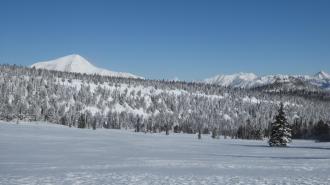 This avalanche follows the treed ridgeline. It broke hundreds of feet wide, likely under the