Good Morning. This is Dave Zinn with the Gallatin National Forest Avalanche Forecast on Tuesday, February 9th at 7:30 a.m. Today's forecast is sponsored by Werner Wealth Management (Advisors with DA Davidson) and Yellowstone Ski Tours. This forecast does not apply to operating ski areas.

The Bridger and Northern Gallatin Ranges picked up an additional 6-10” of new snow, Big Sky and Cooke City got 3-4” with a goose egg in West Yellowstone. This morning, temperatures are in the single digits F and the wind is blowing 10-20 mph from the west to south. Today’s high temperatures will range from 10-20 F, winds will be 10-20 mph from the west and lingering snowfall will bring 1-2” to Cooke City with the remainder of the forecast area receiving a trace.

Since Wednesday, nearly constant snowfall in the Bridger, Madison and Gallatin Ranges added up to 30” in the south and 54” in the north equal to 2.7-3.9”  of snow water equivalent-SWE. New snow loaded a weak snowpack and resulted in avalanches. Yesterday, skiers reported seeing six avalanches in the Dudley Creek area, the Big Sky Ski Patrol used explosives to trigger slides that broke 3-5’ deep into old layers of weak snow, and Yellowstone Club ski patrollers remotely triggered an avalanche in the backcountry snowpack across their ropeline (Dudley Creek details, YCSP photo). Yesterday at Mount Ellis, we saw widespread cracking on steeper slopes and stayed in lower angle terrain (photo, video). Look at our weather and avalanche log to track avalanche activity for each day during the storm cycle.

Winds are continuing to create drifts of snow sensitive to human triggers and Doug explains how the snowpack will remain dangerous for days from Bridger Bowl backcountry (video). Avoid steep wind-loaded slopes and use careful route-finding that minimizes exposure to steep terrain to travel safely in the backcountry today. Human-triggered avalanches are likely and the danger is rated CONSIDERABLE.

The mountains around Cooke City received 3-4’ of new snow equal to 3.1” of SWE since last Wednesday. Dangerous avalanche conditions exist on and under all steep slopes. Yesterday, skiers in the Sheep Creek drainage triggered an avalanche from a long distance away that broke 4’ deep and ran down into the gully below (photo and details), riders east of town spotted avalanches that failed naturally (photo and details), and skiers west of Cooke City in the thinner and weaker snowpack of the park triggered a collapse that rippled out from them (details). On Friday, a skier triggered and was partially buried by a slide on Woody Ridge (photo and details). Fresh drifts of wind-loaded snow are adding weight to slopes and will be sensitive to triggers. Avoid steep wind-loaded slopes specifically and use careful route-finding that minimizes exposure to steep terrain in general. Human-triggered avalanches are likely and the danger is rated CONSIDERABLE.

Two feet of snow in the mountains around West Yellowstone since Wednesday loaded a weak snowpack. Over the weekend a rider triggered a large avalanche near Targhee Creek, luckily escaping without being caught (photo). The snowpack in West Yellowstone has multiple persistent weak layers producing avalanches and will take time to stabilize after each storm (Lionhead video). Human-triggered avalanches are possible but with no new snow in the last two days the likelihood of triggering a large avalanche is going down. Evaluate the terrain and snowpack carefully to identify and avoid areas where you find signs of instability. The danger is rated MODERATE.

The deadly cluster of avalanche fatalities is continuing with another rider killed yesterday in Washington.

Since last Sunday there were 16 avalanche fatalities in the U.S. The most in one week in the U.S. since 1910 (NYT article). On Saturday in Utah, 8 skiers were caught and 4 were killed. Three events in the last week involved multiple burials and deaths. Our deepest condolences go out to the family and friends of those involved in all the recent events. More info at: avalanche.org/avalanche-accidents/

With this deep snow also be cautious of snow immersion/suffocation. From a skier in Hyalite Saturday: “[skied] low angle slopes - but keeping the terrain mellow meant our biggest concern was deep snow immersion/tree wells... which were REAL hazards today. At one point I had an odd prerelease, crashed and ended up slightly head down choking on snow and thankfully my partner was close and able to help right me.” 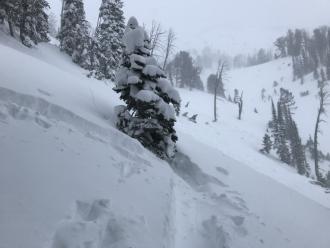 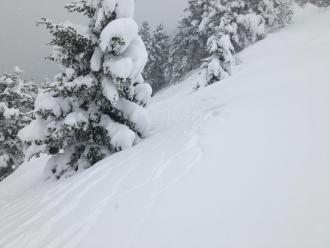 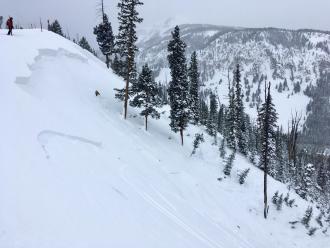