Good Morning. This is Alex Marienthal with the Gallatin National Forest Avalanche Forecast on Saturday, January 16th at 7:15 a.m. This forecast is sponsored by Blitz Motorsports and Yamaha and Yellowstone Club Community Foundation. This forecast does not apply to operating ski areas.

Last night snow showers delivered 3-4” to the mountains near Bozeman with 1-2” elsewhere. This morning, temperatures are teens to low 20s F and wind is west-northwest at 10-15 mph with gusts to 30 mph. Today under partly cloudy skies, temperatures will be in the 20s F and wind will be west-northwest at 10-15 mph with gusts to 25 mph. Snow showers tomorrow will deliver less than an inch by morning, and heavy snowfall is expected late tomorrow into Monday.

New snow favored the Bridger Range and Hyalite with 3-4” equal to 0.3-0.5” of snow water equivalent (SWE). Moderate west wind drifted this snow into fresh slabs which add weight to an unstable snowpack and create dangerous avalanche conditions. Weak, sugary snow that formed during recent months of cold, dry weather is buried 2-3 feet deep (photo of crystals), produced large avalanches during the last couple weeks, and is not getting stronger (Large skier triggered slide in Hyalite, natural avalanches in Bridgers). In addition to avalanches breaking deep and wide on sugary weak layers, you can also trigger fresh drifts along ridgelines. Although relatively smaller, these wind slabs can be harmful, especially in terrain with higher consequences. They could also trigger deeper avalanches. Today the avalanche danger is CONSIDERABLE on wind-loaded slopes and MODERATE on non-wind loaded slopes.

In the Madison Range, southern Gallatin Range and Lionhead area near West Yellowstone we have documented many recent avalanches and signs of instability on sugary weak layers buried 2-3 feet deep (avalanche log, video from Lionhead, video from Bacon Rind, all videos). The mountains also now have a layer of feathery surface hoar buried 6-12” deep, below snow that fell Tuesday-Wednesday. It is worth digging to see if this layer exists prior to traveling on steep slopes, and to test if it will be a problem with more snow. On Thursday, Dave was in Taylor Fork and documented 10 avalanches which broke under the new snow (video, details and photos). Today two buried weak layers make avalanches possible to trigger. Careful snowpack evaluation and cautious route finding are essential. The avalanche danger is rated MODERATE.

In the mountains near Cooke City, sustained strong wind earlier this week stripped slopes of new snow and piled thick drifts on other slopes. Natural avalanches were triggered during this loading event (photo and details, photo). These and skier triggered avalanches last week (Fin avalanche, ski-cut north of Cooke) are good reminders that some slopes have unstable buried weak layers. Our main concern is a layer of sugary facets buried 2-3’ deep. Now in addition, the recent snowfall buried a weak layer of surface hoar (photo) that may avalanche with the next few storms. Skiers got this layer to break clean in their stability test on Thursday. These layers are not on all slopes, so it is a good idea to dig to look for them before riding steep slopes, and to track their location as they could avalanche with the next round of snow. Today, buried weak layers make avalanches possible to trigger and avalanche danger is MODERATE.

Tuesday, January 19, 6-7 p.m. The Friends of the Avalanche Center will offer a FREE 1-hr Avalanche Awareness Talk in partnership with the University of Montana Western School of Outreach. The talk will be a live, ONLINE event. Join us HERE. 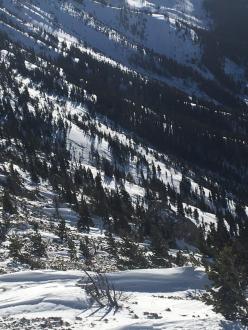 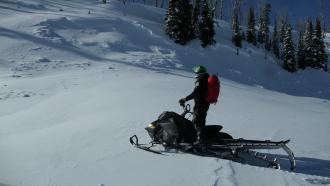 Small avalanche on the Sage Basin Ridgeline in the Taylor Fork. Photo: GNFAC 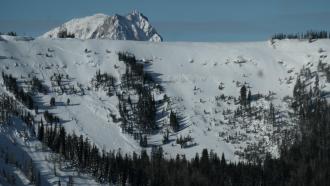 Avalanche in Sunlight Basin. There were 10 natural avalanches from Wednesday's snow and wind and 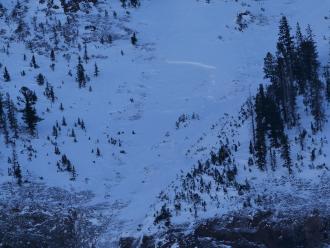 This small, natural avalanche released on a north aspect outside Cooke City. It was seen 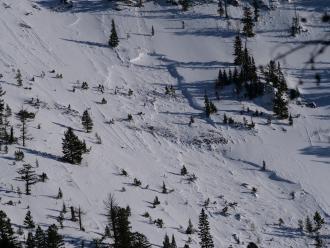 This small, natural avalanche released on a west aspect outside Cooke City. It was seen 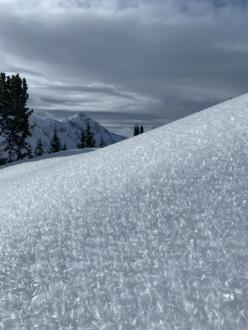 Surface hoar was observed on many slopes near Cooke City on 1/12/21. It is now buried