Good Morning. This is Ian Hoyer with the Gallatin National Forest Avalanche Forecast on Saturday, December 19th at 7:15 a.m. This forecast is sponsored by Cooke City Motorsports and Uphill Pursuits. This forecast does not apply to operating ski areas.

While no new snow fell in the last 24 hours, winds have been strong and gusty. Wind speeds are consistently in the 20s mph with gusts into the 40s and 50s mph out of the southwest and west (hitting 60 mph on the summit of Lone Peak). These strong winds will continue today. Temperatures this morning range from the low teens F to high 20s. High temperatures today will be high teens and 20s F under cloudy skies. Snow flurries today won’t amount to much accumulation. Another round of snow starts tonight favoring the Cooke City area. Expect 2” in Cooke City by tomorrow morning with a trace to 1” elsewhere.

Strong winds have grown existing drifts and also built new drifts of cohesive snow sitting on a weak foundation. Yesterday (before the winds picked up) we got reports of multiple slides triggered by snowmobiles, groomers, snowplows, and with explosives at the ski resorts (photo, photo, photo). These slides were generally small, but are a clear indication that the snow is unstable and that the conditions for larger slides exist. The very strong winds have likely built drifts in unusual places further below ridgelines than is typical. Continued strong winds today will continue to build new drifts, so stay on alert for changing conditions through the day. Avoid steep, windloaded slopes.

There is less new snow available to drift in the Bridger and Northern Gallatin ranges. Drifts will generally be thinner and more isolated, but no less dangerous where there is a thick slab of wind drifted snow. Weak snow in the lower snowpack is widespread, so anywhere these drifts form they are likely to be unstable. Unfortunately, these weak layers will not stabilize quickly, so plan to stay on alert for them for the foreseeable future. Watch for and avoid heavily wind-drifted slopes.

The avalanche danger today is MODERATE on wind-loaded slopes and LOW on all others.

Wind drifts of new snow are also the primary concern around Cooke City, In general, drifts are not building on top of snow that is as weak as in other areas. However, there are spots with weaker snow, as evidenced by several natural slides that broke west of Cooke City earlier in the week (photo). Alex was in Cooke yesterday and recommended digging below the new snow to find out what it’s sitting on before riding steep slopes (video) Today, human triggered avalanches are possible and the avalanche danger is MODERATE on wind-loaded slopes and LOW on all others.

Sadly, yesterday a solo skier was buried and killed in an avalanche near Crested Butte, Colorado. This was the first avalanche fatality of the ‘20/’21 season. A preliminary report is available here. 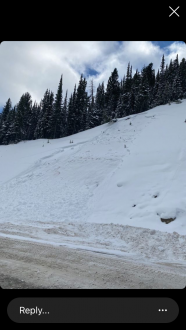 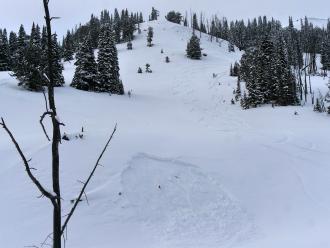 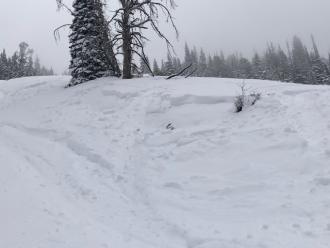