Good Morning. This is Ian Hoyer with the Gallatin National Forest Avalanche Forecast on Friday, December 18th at 7:15 a.m. This forecast is sponsored by Gallatin Valley Snowmobile Association and Bridger Bowl. This forecast does not apply to operating ski areas.

Since yesterday morning, 2” of snow fell in the mountains around Bozeman. 3-5” fell  around West Yellowstone and Cooke City. The Yellowstone Club picked up 7” while Big Sky Resort only got around 3”. Temperatures this morning are in the teens F. Winds are 15-20 mph from the west-northwest with gusts of 30-40 mph. Today, winds will shift a more southwesterly and continue to blow 10-20 mph with higher gusts. High temperatures will be in the high teens and 20s F. Skies will be mostly cloudy today with a light dusting of snow expected tomorrow morning.

Yesterday’s new snow and wind drifting are keeping wind loaded slopes at their breaking point around Big Sky and West Yellowstone. The lower snowpack is very weak and cohesive slabs are building with each snow and wind event. Areas around Big Sky that saw larger snowfall amounts yesterday now have a snowpack setup more similar to the areas around West Yellowstone that had been favored by snowfall over the last week.

Yesterday, in Taylor Fork, I found deep drifts sitting above weak facets and got very unstable test results on a slope with only a 6” deep slab (video). On Wednesday, Doug intentionally triggered an avalanche on a small sidehill that was wind-loaded (photo) and a skier saw a small avalanche on the western edge of Yellowstone National Park (details). Carefully investigate any steep slope to make sure it doesn’t have a cohesive wind-drifted slab before riding it. Avoid wind-loaded slopes today.

The foundation of the snowpack in the Northern Gallatin and Bridger Ranges is also very weak, it just has not been loaded as heavily. Most slopes don’t yet have the cohesive slab needed for an avalanche (video). Be on alert for the wind-loaded slopes that do. Strong west winds have built cohesive slabs on slopes near ridgelines and also cross-loaded gullies at lower elevations. Cracks shooting out from your skis or sled are clear indicators you’ve found an unstable slope. An Extended Column Test on a nearby, lower-angled slope is a great way to search for instability before exposing yourself to steep terrain (video).

The avalanche danger today is MODERATE on wind-loaded slopes and LOW on all others.

The new snow around Cooke City is falling on a much more stable foundation. The snowpack is 3-4 ft deep without widespread weak layers. Wind drifts of new snow are the primary concern. More new snow and strong winds yesterday built new slabs and will keep older drifts reactive. For today, human triggered avalanches are possible and the avalanche danger is MODERATE on wind-loaded slopes. The danger is LOW on all other slopes.

Doug worked with Bruce Jamieson on a video about when, where and how to perform stability tests. Watch it here. 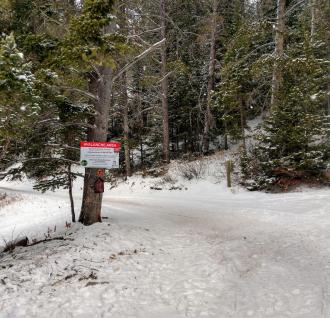 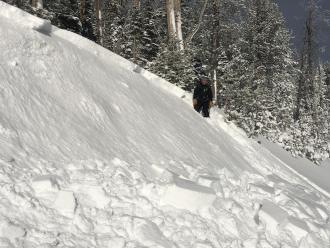 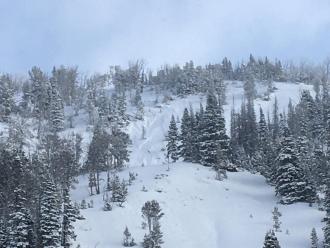 We observed a cluster of relatively small, loose snow avalanches in the Tyler's Slide area