* Ski Areas are closed for the season. Backcountry conditions exist. There is no avalanche control or ski patrol services. Please stay clear of workers, work areas, snowcats, snowmobiles, chair lifts and other equipment. Watch Dave’s video explaining what to expect if you tour in the ski area.

Last night the northern Gallatin Range picked up 3” while the mountains around West Yellowstone got 1” and Cooke City 2”. This morning, under mostly cloudy skies, mountain temperatures are 20F and wind is south to southwest at 10-20 mph. Scattered snowfall today and tonight will drop 1-2” of snow with wind remaining southerly and light. Temperatures may rise above freezing and skies will be partly to mostly cloudy with sun poking through at times.

During mid-winter we hardly bat-an-eye at a couple inches of snow. Today is different. Temperatures will hover above freezing and sunshine will hit a few slopes and rapidly wet the new snow which could avalanche.  Many slopes have an icy crust buried up to a foot deep that will be a sliding surface for wet snow. If the sun hits slopes, expect to see pinwheels rolling downhill and loose, wet avalanches. Skiers in Dudley Creek near Big Sky found a large wet avalanche that occurred on Monday (photo) and smaller wet slides yesterday (photo). Similarly, on Monday Dave saw wet slides streaming off slopes in the northern Bridger Range (video) and yesterday many wet, loose slides were noted around Cooke City. This time of year it only takes a short hit of sun to quickly turn the surface to mush and avalanche.

Yesterday in Hyalite, skiers found 1” tall, feathery surface hoar growing atop shady slopes. Last night’s snowfall buried it. Although SNOTEL measured 3” of new snow, it is likely deeper than that at higher elevations. Collapsing and shooting cracks in the new snow are signs surface hoar is underfoot and serves as a warning that slopes are unstable.

Weather is the architect of avalanches and today the weather is fickle. Temperatures rising a few degrees warmer than expected along with a prolonged bout of sun could trigger widespread wet avalanches in the surface snow. If temperatures remain a few degrees below freezing without sun we won’t see wet instability. Since surface hoar is buried up Hyalite we should assume it’s also buried in the southern ranges until proven otherwise.

Conditions are dynamic today which increases my uncertainty. The interplay of new snow, wet snow, sunshine, clouds, and above freezing temperatures, point to a MODERATE avalanche danger since both wet and dry avalanches are possible.

The GNFAC and Friends avalanche education programs have been cancelled due to the Coronavirus. Thank you to all our amazing instructors for a great year of education!

On Sunday, March 15, a sidecountry skier was killed in an avalanche out of bounds at the Pebble Creek Ski area south of Pocatello, Idaho. The Utah Avalanche Center visited the site and along with the Sawtooth Avalanche Center, will publish a report soon. This is the 19 avalanche fatality of the winter. 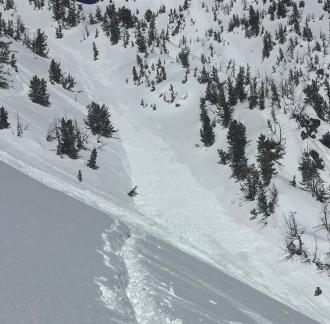 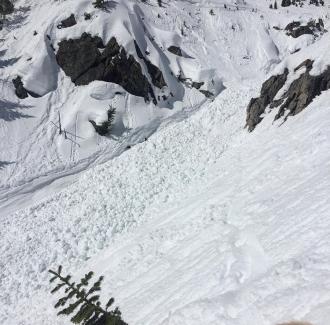 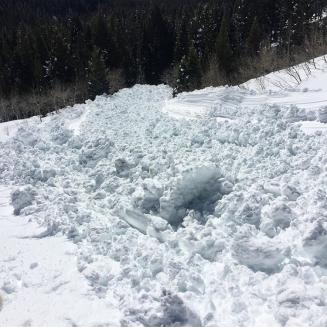