* Ski Areas are closed for the season. Backcountry conditions exist. There is no avalanche control or ski patrol services. Please stay clear of workers, work areas, snowcats, snowmobiles, chair lifts and other equipment.

In the last 24 hours, the mountains around West Yellowstone got an inch of new snow with none for the other ranges. Winds were light at 5-15 mph from the west to southwest and this morning, temperatures are in the 20s F. Clouds will increase this afternoon with 1-2” of new snow in the mountains around West Yellowstone and Cooke City and a trace to 1” in the northern ranges by morning. Mountain temperatures will be in the mid to upper 30s and winds will be west to southwest at 5-15 mph.

The mountain ranges near West Yellowstone and Cooke City received 12-14” of new snow equal to 1.2-1.6” of snow water equivalent (SWE) since Saturday. In Cooke City a snowmobiler triggered two slab avalanches on Sunday, the bigger of the two broke a foot deep and 100’ wide (photos and details). Skiers saw many avalanches within the new snow (details, photo). On Sunday, skiers near Hebgen Lake reported that the new snow avalanched in steep terrain with ski cuts (details). The new snow is stabilizing but watch for and avoid areas where shooting cracks from your skis or sled indicate continued instability.

Increasing clouds should minimize the wet snow danger today. However, if the sun stays out as the day warms, the wet snow danger will rise and avalanches will be possible. If you observe natural activity or pinwheels on south-facing slopes, move to shadier north-facing aspects that hold dry snow.

The danger is rated MODERATE and human triggered avalanches are possible. Assess slopes for dry snow instability and watch for signs of snow surface warming if you are considering entering avalanche terrain today.

Saturday through Sunday night the mountains around Big Sky received 9” of new snow (0.9” SWE) with 4” (0.4” SWE) in the mountains around Bozeman. Yesterday in Frazier Basin, we observed six wet, loose avalanches and intentionally triggered a small cornice and wind slab before committing to our ski objective (video). On Sunday in Middle Basin, Doug tested the new snow and found it was bonding well at the interface (video, photo). Nearby on the same day, the Big Sky Ski Patrol was dealing with fresh drifting and rapid cornice growth. Without new loading, the drifts that avalanched the last two days will stabilize, but I don’t trust them yet. Avoid or test fresh pillows of snow as human triggered avalanches are possible in these areas.

Increasing clouds should minimize the wet snow danger today. However, conditions change rapidly this time of year. If you observe natural activity or pinwheels on south-facing slopes, move to shadier north-facing aspects that hold dry snow.

The avalanche danger is MODERATE on wind loaded slopes and solar aspects if the sun stays out. The danger is LOW everywhere else. Avoid wind loaded starting zones and watch for signs of snow surface warming as signs of instability if you are considering entering avalanche terrain today.

Upcoming avalanche education programs have been canceled due to the coronavirus. Thank you to all our amazing instructors for a great year of education. We appreciate you! 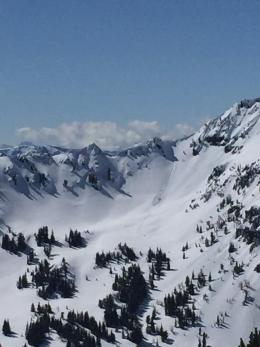 Remember Bridger Bowl is serious avalanche terrain. There are no longer ski patrol services and there is non-controlled avalanche hazard like the rest of the backcountry (video). Treat it accordingly. Carefully asses snow stability and consequences of all terrain you plan to travel in. The north bowl road is a terrain trap that gets hit by natural and skier triggered avalanches regularly. It is one example of not a good place to spend time walking up or standing. 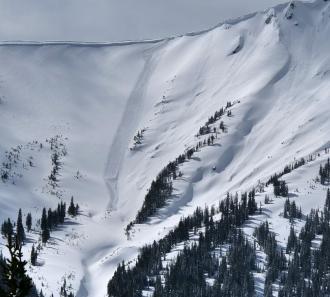 Small slab avalanche in the upper Republic Valley, a northeast aspect around 10,000'. Photo: B Fredlund 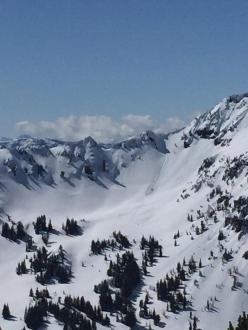 From the Blackmore/Elephant saddle, I observed what looked to be a less than a day 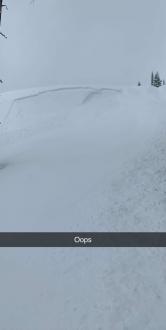 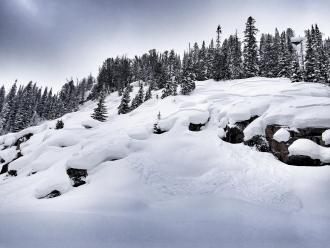