Good Morning. This is Dave Zinn with the Gallatin National Forest Avalanche Forecast on Tuesday, February 18th at 7:00 a.m. Today’s forecast is sponsored by Grizzly Outfitters and Highline Partners. This forecast does not apply to operating ski areas.

In the last 24 hours, 9” of low-density snow fell on the Bridger Range, 3-5” in the Madison and Gallatin Ranges, and no new snow fell in the mountains around Cooke City and West Yellowstone. Mountain temperatures are in the single digits to teens F and winds are light from the west to southwest at 5-15 mph. Today, lingering flurries will bring up to 1” of new snow before high pressure moves in to the area for the rest of the week. Temperatures will be in the teens F and winds will remain light from the west at 5-15 mph.

In December we warned you that we were going to be talking about the weak snow near the ground for a long time. Yesterday, a rider was side hilling across the top of a break over in Buck Ridge and triggered a deep avalanche on this layer (avalanche activity). Deep slides continue to occur across our advisory area and where there aren’t happening, well, Doug was unwilling to ski the avalanche terrain on Mount Ellis yesterday even after getting stable test results (video).

Avalanches over the weekend demonstrated instabilities in the northern ranges. Friday, skiers came across a cornice triggered avalanche that propagate 200’ across the slope and failed 2-5’ deep in Bear Basin (description and photos) and a natural avalanche that propagated a mile wide in the Divide Peak Basin (photos). Saturday, skiers observed many natural avalanches from Mount Blackmore ranging from small to 8’ deep (details and photos). Sunday, a natural avalanche broke deep north of Bridger Bowl in Wolverine Bowl (details). Yesterday’s lightweight snow (0.3” of snow water equivalent) will not significantly change the avalanche danger, but stay vigilant because the snowpack hasn’t gotten a rest yet.

In the southern ranges, a snow biker in the Taylor Fork triggered a 5’ deep slide on Saturday and in the Hayden Creek drainage south of Cooke City a cornice fall triggered an avalanche that failed at the ground (Taylor Fork details, Hayden Creek details). I spent the last two days in Cooke City and found a stabilizing snowpack, but one that isn’t completely trustworthy yet. There it will take a significant trigger (i.e. a cornice fall or an avalanche in the new snow), a big storm adding a lot of weight, or some bad luck to trigger the weak snow near the ground now insulated by a deep snowpack. New snow is bonding well to the surface, but, where wind had drifted snow, shooting cracks under our skis and sleds demonstrated isolated instabilities (video). Doug echoed this message in Lionhead, you can still find thinner or wind loaded spots to trigger an avalanche, but it is getting harder (video).

Today, be cautious in areas that received more new snow and maintain a healthy distrust of the weak snow near the ground. It is still possible to trigger deep and destructive avalanches on the sugary snow as yesterday’s slide in Buck Ridge demonstrates. The avalanche danger is rated MODERATE.

The recent avalanches have been large and some have occurred in unusual locations. Our Photos page and Avalanche Activity page are bursting at the seams with avalanche reports. 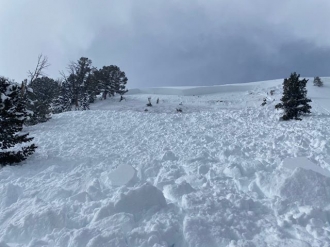 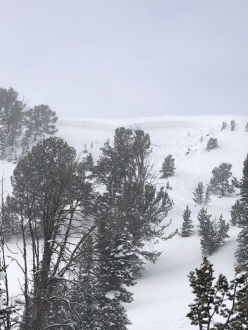 From message: "Went out on a recon to Buck Ridge today. Knew the dangers and 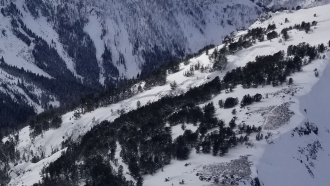 "...picture is a close up of the avalanche on the ridge between Elephant and Blackmore 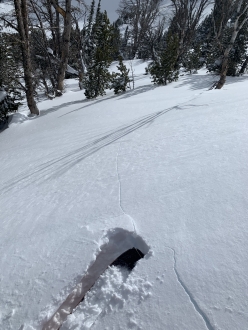 "Toured up Blackmore today, we had shooting cracks under our feet along the north east