Good morning. This is Alex Marienthal with the Gallatin National Forest Avalanche Forecast issued on Monday, April 1st at 7:00 a.m. Today's forecast is sponsored by Montana State Parks and Werner Wealth Management. This forecast does not apply to operating ski areas.

This morning the mountains have 1-2” of new snow except for the Bridger Range which received no new snow. Temperatures are high teens to mid-20s F and wind is west to northwest at 10-20 mph. Today, temperatures will reach high 20s to mid-30s F with west-northwest wind at 15-20 mph. Skies are partly sunny this morning and clouds will increase this afternoon with light snow showers. The mountains will get a trace or 1” by tomorrow with a few more inches through Wednesday.

The snowpack is generally stable and avalanche activity is confined to recent snowfall, which includes 3-6” that fell on Friday and a couple inches last night. Today cool temperatures and cloudy skies will prevent wet snow avalanche activity. Yesterday I toured in Hyalite and Doug went to Bacon Rind. We both found a thick, supportable frozen crust on sunny slopes, and well-bonded dry snow on shady slopes (video). Both surfaces remained cold and stable through the day. Throughout the advisory area we have found a similarly stable snowpack (video, photo, video).

Isolated avalanche hazards exist and small slides can be triggered if you travel into steep terrain. On slopes that receive direct sun the crust near the surface creates a stable snowpack, and potential avalanches are limited to the couple inches of new snow from last night sliding on this crust. On slopes that don’t receive sunshine be cautious of wind-drifted snow near ridgelines and below cliffs (photo), and dry loose snow avalanches (photo). Today avalanches will be small and generally harmless unless they push you into unfavorable terrain like cliffs or rocks. Assess terrain you plan to ride for consequences of being caught in even a small slide.

Today the snowpack is generally stable and isolated instabilities are confined to recent snow. Avalanche danger is LOW.

We are not issuing danger ratings.
The snowpack is generally stable and avalanche activity is confined to recent snowfall. Cool temperatures and cloudy skies today will prevent wet snow avalanche activity. Isolated avalanche hazards exist and small slides can be triggered if you travel into steep terrain. Be alert for small drifts and loose snow slides. 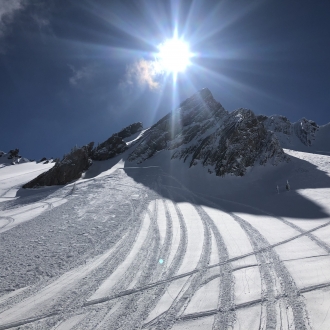 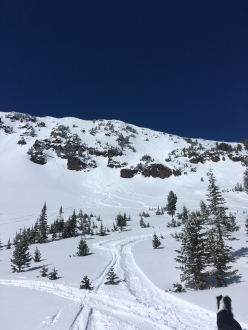 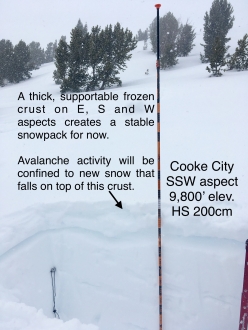 Near Cooke City we found a generally stable snowpack, similar to the rest of the