Good morning. This is Eric Knoff with the Gallatin National Forest Avalanche Forecast issued on Saturday, March 23rd at 6:30 a.m. Today's forecast is sponsored by Gallatin Valley Snowmobile Association and Mystery Ranch. This forecast does not apply to operating ski areas.

Yesterday, a fast moving squall dropped a trace to 1” of snow in the mountains south of Bozeman. This morning, skies are partly cloudy and temps range from the upper 20’s to low 30’s F. Winds are blowing 10-20 out of the west-southwest. Today, skies remain partly to mostly cloudy and a few snow showers are possible in the southern mountains. Highs today warm into the low to mid 30’s F and winds remain light to moderate out of the west-southwest. Another inch or two is possible by tomorrow morning in the mountains south of Bozeman.

Above average temperatures the past few weeks have wreaked havoc on the snowpack. On low to mid elevation slopes, the pack has turned isothermal and lost its strength and integrity. Over the past five days, widespread wet snow avalanche activity has been reported across the forecast area (photos). On Thursday, a timber sled rider triggered and was partially buried in a wet slab avalanche on the west side of Sage Peak in the southern Madison Range. The slide was triggered as the rider was side-hilling a steep southwest facing slope at roughly 3 pm (photo). The slide failed at the ground, releasing the entire season’s snowpack. The timber sled was completely buried, fortunately the rider was only buried to his waist.

This was a close call that could have ended much worse. Being buried in wet snow debris is like being encased in concrete. It’s something you want to avoid at all costs. A recent wet slide in Sourdough Canyon south of Bozeman is a perfect example of how a small slope can have potentially dangerous consequences. This slide failed naturally and put 3-5’ of heavy debris on a very popular skiing and hiking trail (photo).

Although the snowpack took a beating this week, conditions are changing for the better. Cooler temps and cloudy skies will significantly decrease the potential for wet snow avalanches the next few days. Be cautious today when traveling around steep slopes on mid to low elevation terrain where the snowpack did not experience a strong freeze overnight. On upper elevations slopes, the snowpack should stay cold and locked up.

Today, the avalanche danger will start out LOW, but rise to MODERATE on mid to low elevation slopes as temps rise above freezing.

We are not issuing danger ratings.
Cooler temps and cloudy skies will significantly decrease the potential for wet snow avalanches the next few days. Be cautious today when traveling around steep slopes on mid to low elevation terrain where the snowpack did not experience a strong freeze overnight. On upper elevations slopes, the snowpack should stay cold and locked up.
The Last Word 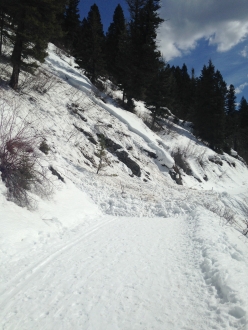 This wet slab was observed on Friday (3/22) across the Sourdough canyon trail, about 1.4 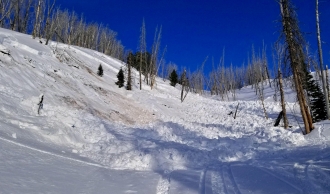 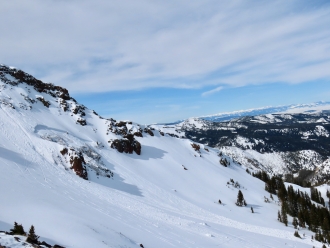 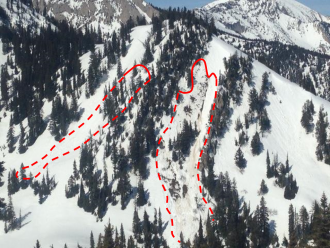 Two wet slabs that looked to have released during the past 48 hours. The smaller