The southern mountains, including the Lionhead area had an avalanche warning on Sunday. The snowfall stopped and winds are light, but slopes are still dangerous. Over the weekend the winds blew and 11-18” of snow fell onto an unsupportive snowpack of sugary facets. Near Hebgen Lake on Friday, Alex, Eric, and a separate group of snowmobilers had cracking and collapsing on this layer which was before the storm (video, photo, details). Triggering slides is likely today, even from flat terrain at the bottom of the slope. Areas that are wind-loaded will be extra prone to triggering. For today, the avalanche danger is rated CONSIDERABLE on all slopes.

In the last four days the northern mountains have gotten 1.5-2 feet of low density snow. The number one sign of instability is recent avalanche activity, with a close second being cracking and collapsing. In the last 48 hours we’ve had nine reports. The full list includes the northern Bridger Range, the Throne, Buck Ridge, Mt. Ellis, Mt. Blackmore, Beehive Basin, and the backcountry near the Yellowstone Club. Most of the activity was confined to new and windblown snow (video). A few slides may have released on facets buried 1.5-2 feet deep (video, picture) while other slopes had a thin and very weak snow structure that was conducive to collapsing (Ellis) and avalanching (Yellowstone Club).

West to north winds are continuing today and forecasted to get even stronger, both at the ridgetops and mid-mountain. Triggering slides on wind-loaded slopes is likely and the danger is rated CONSIDERABLE. On slopes untouched by the wind, the danger is rated MODERATE.

The mountains near Cooke City have received 8-10” of snow over the weekend with remarkably little wind. On Sunday skiers triggered many 2-4” slabs in the new snow in Yellowstone National Park and another skier triggered a small avalanche on Woody ridge (details). Yesterday, a few natural slides were seen near Lulu Pass (details) and also on the Fin (photo). Last week my snowpit on Scotch Bonnet revealed unstable facets 1-1.5 feet below the surface (video, photo) and on Friday a snowmobiler triggered a slide on Mt Abundance on this layer (photo). I also found slopes with less than three feet deep to be exceptionally weak (video), similar to thin snowpacks in other ranges. Given the recent avalanche activity, buried weak layers, and likelihood of increasing wind-loading today, triggering avalanches is possible and the danger is rated MODERATE.

February 2, King and Queen of the Ridge at Bridger Bowl (fundraiser). Info and registration is here, and then you can sign up to get pledges here. 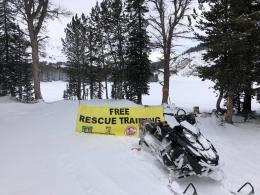 Read Doug’s recent article on Snowmobiler Education Efforts that will be published in the next issue of The Avalanche Review. 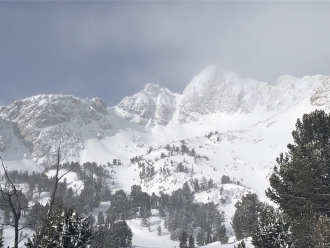 Skiers observed many natural avalanches in Beehive Basin yesterday (12/31). "My partner counted 12+ including 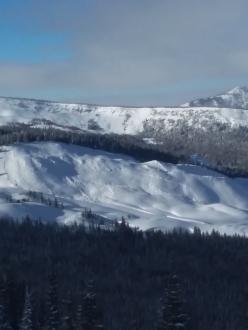 From an email, " Patrollers also spotted a natural avalanche outside of the ski area 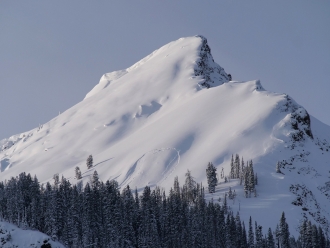 This photo was taken this morning (12/31) after the skies cleared. This avalanche looks to