From BSSP: "The avalanche factory that is The Wave did indeed go into production today. A 2lb. shot in skier’s right Castro’s Shoulder initiated an impressive deep slab avalanche that took out Castro’s Shoulder through Wave South above Vuarnet Cliffs. The secondary start zones under these paths- Castro’s Beard (south half) and Mike’s Rodeo- also avalanched away.

The bed surface appears to be the top of the original big storm in October that forms the base of the snowpack on Lone Mountain. There is a melt/freeze crust at the top of that layer, with
small grained (mostly) facets on top of the crust, with the rest of the season’s snowpack sitting on that weak
interface.

This [wide] propagation may be the result of the surface wind slab formed in the past few days finally tying the paths together enough to allow for such propagation.

The numbers are impressive- estimated crown length of 1,100 ft., crown depth of 3-4’, vertical run
of 1000 ft., and linear run of 2000 ft. We classified the slide as HS, AE (2lb.), R4/D3.5, O/G. Unfortunately,
conditions rendered good photos difficult. All the paths that avalanched have been shot repeatedly, almost
daily, all season long...." 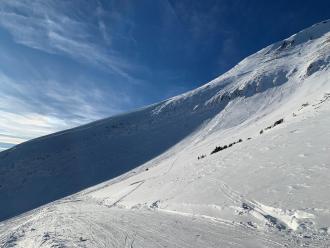