From obs: "...We continued up and decided to stick to a ridgeline with trees in order to avoid the surrounding gullies which we believed may be cross-loaded. Near the top of the ridge (Around 9800') our options narrowed to either committing to climbing a gully or turning around, and after a couple hand shears we noticed the new snow was becoming stiffer and sliding easily on the crust so we ripped skins and turned around.

Our route had one area of concern on the way down, which was a small gully between a cliff band. I made a ski cut towards the top since the terrain had (relatively) lower consequence and was able to release a wind slab roughly 4-6" deep. The deeper area to the right was the descent track from group members 2 and 3 after the wind slab had released." 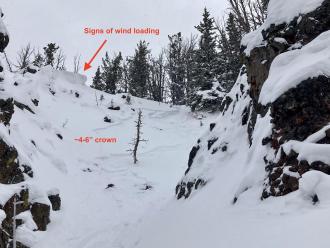