Good morning. This is Dave Zinn with the Gallatin National Forest Avalanche Forecast on Tuesday, January 24th at 7:15 a.m. Today’s forecast is sponsored by Archer Construction and Gallatin County Sheriff Search and Rescue. This forecast does not apply to operating ski areas.

This morning, temperatures are in the single digits F with 10-25 mph winds from the west to the north. The mountains around Bozeman and Big Sky received 1-2” of snow, with nothing elsewhere. Today, temperatures will be in the teens F with 10-25 mph winds from the southwest to the northwest. Under a northwest flow, the mountains around Bozeman, Big Sky and Cooke City will receive 4-6” of new snow by tomorrow morning, with 1-2” near West Yellowstone.

A weak layer of surface hoar buried six inches to two feet deep and drifting snow make human-triggered avalanches possible in the mountains around Big Sky, West Yellowstone and Cooke City. Persistent weak layers within the snowpack are our principal drivers of decision-making today. Yesterday, after thoroughly assessing the hazard presented by a feathery layer of buried surface hoar (photo), weak snow near the bottom of the snowpack caused us to reconsider our terrain choices at Bacon Rind (video). A group of riders near Two Top outside West Yellowstone excluded avalanche terrain from their travel plan after finding three stripes of surface hoar in the upper 20” of their snowpits (observation). Skiers in Cooke City recognized the same issue on Henderson Mountain (observation). Either thoroughly assess snowpack for instability related to weak layers or take a cue from the riders at Two Top and avoid slopes steeper than 30 degrees altogether (Ian’s Hebgen Lake Video).

The mountains around Big Sky received up to five inches of snow in the last two days, and winds gusting to 40 mph are drifting this fresh snow into slabs that will avalanche in steep terrain. On Saturday, a skier outside the boundary of Big Sky Resort triggered a wind-loaded slope that broke 150’ wide (details and photo). Even without the new snow, riders north of West Yellowstone reported the formation of isolated drifts (observation). Do not underestimate the power of a small avalanche and avoid wind-loaded slopes, especially when terrain traps are present.

Today, human-triggered avalanches are possible, and the danger is MODERATE.

The mountains near Bozeman received 2-5” of low-density snow in the last two days. Skiers in the Bridger and Northern Madison Ranges reported wind drifts and loose snow avalanches (observations 1, 2). Since noon yesterday, winds averaging 15-35 mph are transporting any fresh snow into drifts that can avalanche today. Do not underestimate these slabs of drifted snow, especially in terrain where cliffs, trees or rocks increase the consequences of getting swept down the hillside. Alex, Ian, and I all noted drifting snow as our primary concern in the Bridger Range this weekend (Texas Meadows video). In larger scale terrain, the concern is correspondingly bigger (Saddle Peak video).

New snow has added minimal weight to the snowpack, and avalanches breaking on sugary layers of facets within the snowpack remain unlikely. However, as snow adds up this week, they may “wake up” and produce avalanches.

Watch for instabilities related to new and wind-loaded snow, such as avalanches, cracking or drifts. Avoid slopes where these are present and perform a test to assess weak layers within the snowpack.

The avalanche danger is MODERATE.

A weak layer of surface hoar buried 1-2 feet deep and drifting snow make human-triggered avalanches possible today. Persistent weak layers are our primary cause for concern and should be the principal driver of your decision-making. Thoroughly assess the snowpack and refrain from entering avalanche terrain if there are signs of instability related to weak layers or wind-drifted snow. Or choose to avoid slopes steeper than 30 degrees altogether. 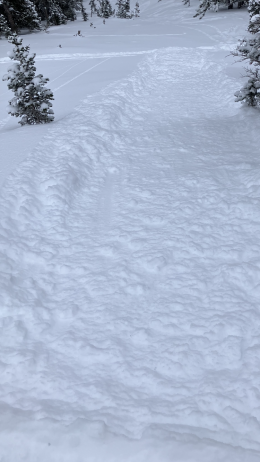 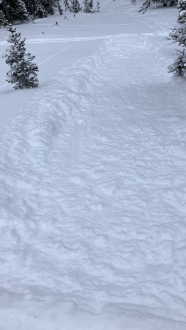 Skiers near Mt Blackmore noted loose snow avalanches with ski cuts. This one slid for 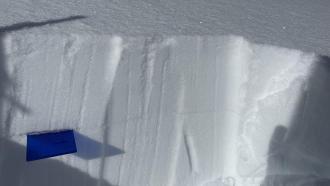 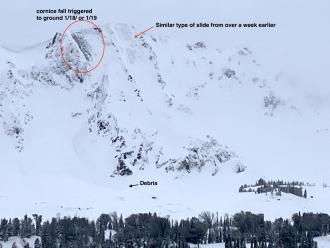 Observed this cornice fall triggered slide morning of 1/19/23. It was not there the previous 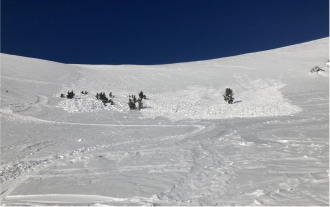