Good morning. This is Doug Chabot with the Gallatin National Forest Avalanche Forecast on Wednesday, January 18th at 7:00 a.m. This information is sponsored by Yellowstone Club Community Foundation and Montana State Parks. This forecast does not apply to operating ski areas.

Yesterday morning a trace to 1” of snow fell in Big Sky and Hyalite. At 5 a.m. skies are clear, temperatures are near 10F and ridgetop wind is blowing W-NW at 5-15 mph, and 20-30 mph in the Bridger Range. Today will be sunny, wind will remain light from the SW-NW and temperatures will rise into the high 20s.

The mountains around Big Sky to Lionhead and Cooke City have a widespread weak layer buried ½ to 2 feet deep. In some places it is small feathery crystals (surface hoar) and in others it is small sugary grains (near-surface facets), but the actual type does not matter. On some slopes this layer is breaking in stability tests and on Sunday skiers triggered small avalanches above Hebgen Lake on it. Yesterday, Ian toured in this area and found the layer as Dave and I did in Island Park a few miles away. In both cases we were unable to get it to break in our tests, but we do not trust it. Ian explained in his excellent video how we do not want to get lured into dangerous terrain. Because this layer is not very deep, it requires minimal digging to look and test for it (Dave’s Beehive video). Although its distribution is widespread, the layer is not found on every slope which makes it risky to rally around and hope for the best.

Other concerns: new snow sluffs yesterday triggered a small slab avalanche in Cooke City (photo), and weak, sugary snow, many inches thick, could be triggered from shallow areas of a slope.

The mountains harbor a weak layer that can produce avalanches. In the absence of avalanche activity, shooting cracks and whumpfs, we are left with either avoiding avalanche terrain or digging and testing to see if this layer is present. If you don’t find it, dig again and again before committing to avalanche terrain.

For today, the avalanche danger is rated MODERATE on all slopes.

In the mountains around Bozeman the snowpack has a poor structure: weak snow near the ground underlies denser slabs. Yesterday, skiers on Ross Peak in the Bridger Range turned around when they got their stability test to dramatically break on this layer (observation). Additionally, there are other weak layers that could break, the most prominent about 1 foot deep, that Alex found on Mt Blackmore on Saturday.

Without obvious signs of instability, we have to dig to find out what is under our feet. Stability tests show us when it is bad, not when it is good. It’s our last check before getting into avalanche terrain, and as the skiers on Ross Peak found, a little extra investigative work can be worthwhile.

For today the avalanche danger is rated MODERATE on all slopes.

Island Park has a weak layer buried 1-2 feet deep. In some places it is small feathery crystals (surface hoar) and in others it is small sugary grains. In the absence of avalanche activity, shooting cracks and whumpfs, we are left with either avoiding avalanche terrain or digging and testing to see if this layer is present. Check out our field video and read our observations from Arange Peak area yesterday to get a handle on what is happening. 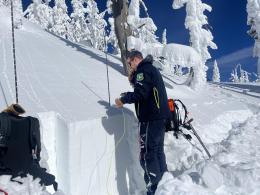 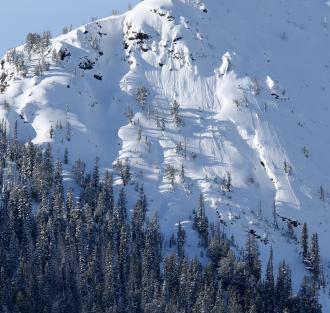 Noted a couple of fresh slab avalanches out there today.  Both were on northerly aspects 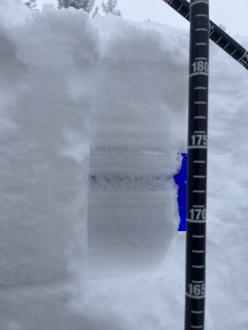 On a Jan. 16 tour into Beehive, we found the concerning layer of feathery surface