Good morning. This is Ian Hoyer with the Gallatin National Forest Avalanche Forecast on Saturday, January 7th at 7:00 a.m. This information is sponsored by Gallatin Valley Snowmobile Association, Yellowstone Ski Tours and Advanced Innovation. This forecast does not apply to operating ski areas.

You can trigger an avalanche today under a fresh wind drift or on weak layers buried throughout the snowpack. Yesterday, a large avalanche broke naturally on Saddle Peak, running over the cliffs and burying a rider that was in the runout zone up to their neck in debris (details). We believe this slide broke in the freshly wind drifted snow, but the new snow is also loading and stressing the weak layers that caused Doug to retreat off Saddle Peak last Tuesday (video). Yesterday during avalanche mitigation work, Big Sky Ski Patrol found reactive 6-8” deep slabs of newly wind drifted snow and my partner and I got cracking around our skies in the northern Bridgers (photo), showing that these drifts aren’t an isolated concern. Look for cracks shooting in front of your skis or sled as a sign that these drifts remain unstable.

Avalanches could also break on the assortment of weak layers throughout the snowpack, including weak snow near the ground. These weak layers are not consistently breaking in snowpack tests and are hard to assess, so toning down your terrain choices is your best mitigation strategy. Be particularly wary of shallow spots as this is where many of the recent slides on these layers have been triggered (photo). Last weekend’s fatal avalanche that broke near the ground should provide good motivation to take these layers seriously (accident report).

Additionally, yesterday, I triggered a very small (15 ft wide), shallow (4” deep) avalanche on a short, steep, sheltered slope in the northern Bridgers (details). This slide broke on the surface hoar that formed widely across the advisory area. There likely aren’t many slopes that have both a slab thick enough to be worrisome and a preserved surface hoar layer, but it is worth watching out for this combination.

Human triggered avalanches are possible and the avalanche danger is MODERATE.

In Island Park, you can trigger an avalanche today under a fresh wind drift or on weak layers buried throughout the snowpack. Look for cracks shooting in front of your skis or sled as a sign that drifts remain unstable. Be wary of shallow spots as this is where many of the recent slides on the deeper weak layers have been triggered. Weak layers are not consistently breaking in snowpack tests and are hard to assess, so toning down your terrain choices is your best mitigation strategy.

The triad of avalanche safety gear should be carried at all times in the backcountry: a beacon, shovel and probe. Every time, every day, always. We can supplement these three with other safety equipment, which is not a bad idea.  A helmet, airbag, Avalung, chest plates, etc. are great additions to our protective arsenal, but they are not a replacement for a beacon, shovel and probe. 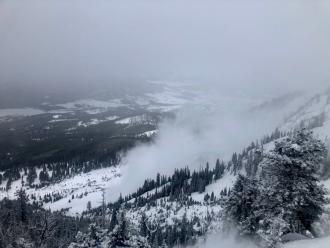 At 1:30 PM on Jan 6th a large avalanche poured over the cliffs on Saddle 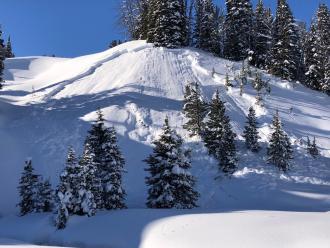 From email: "I came across this older avalanche yesterday when I was guiding a group 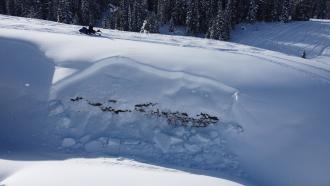