Good morning. This is Dave Zinn with the Gallatin National Forest Avalanche Forecast on Wednesday, January 4th at 7:15 a.m. This information is sponsored by Grizzly Outfitters and Cooke City Super 8/Bearclaw Bob’s. This forecast does not apply to operating ski areas.

On December 31, 2022, a snowmobiler was killed in a large avalanche north of Cooke City. One rider in a group of two triggered the avalanche, was carried 600 vertical feet and buried 5 feet deep. He was located with a probe line an hour after the avalanche happened, and rescuers were unable to revive him. Our deepest condolences go out to the family, friends, and those involved with the rescue and recovery (Full details and photos here).

Persistent weak layers buried in the snowpack from Cooke City to the Bridger Range to West Yellowstone make avalanches failing deep within this winter’s snowpack possible. These could break 1-2 feet deep on a layer of weak near-surface facets or 3-6 feet deep on sugary snow near the ground. Since December 31st, avalanches broke on weak layers under the weight of riders on Sheep Mountain near Cooke City (video and details), at Lionhead near West Yellowstone (video and details), in the Taylor Fork (details and photos), and naturally in Cabin Creek (details and photos). Sadly, on December 31st, a rider triggered a fatal avalanche on Crown Butte (video and details). The same weak layers exist in the mountains around Bozeman and Big Sky. Standing in a pit in the middle of a large avalanche path on Saddle Peak yesterday, Doug was “Not stoked” and pulled the plug on his descent (video).

The challenge of moderate danger is that some slopes will slide under the weight of a skier or rider, but the probability of instability is lower on many others. Assess slope scale stability before considering travel in avalanche terrain. Yesterday, on Mt. Ellis, we did our homework and decided the likelihood of instability on that slope was low before deciding to travel in avalanche terrain (video). The day before on Little Ellis, a group dug and found less stable snow and decided to keep things mellow (observation). This is how it works.

For the future, we are seeing (and many are reporting) a layer of beautiful, feathery surface hoar growing on top of the snow in all corners of the advisory area, including Buck Ridge, where Ian rode yesterday (video). If new snow buries this layer before the wind and sun destroy it. It will become a new weak layer. An inch of fresh snow near West Yellowstone may have done this yesterday. Stay tuned.

Carry and practice with a beacon, shovel, and probe. Dig and test for instability. And, if there is any doubt, the answer is to avoid slopes steeper than 30 degrees. Today, the danger is rated MODERATE.

Persistent weak layers buried in the snowpack in Island Park make avalanches failing deep within this winter’s snowpack possible. On a recent ride, I found sugary facets buried in two layers, 18 to 24 inches deep and near the bottom of the snowpack (video). Yesterday, a group of seven riders near Taylor Mountain triggered a collapse or “whumph” while sitting in flat terrain. This is a red flag because they essentially triggered an avalanche on a persistent weak layer, but their location wasn’t steep enough to slide (observation). Thank you for the observation! Contribute to Island Park avalanche information by submitting your observations on the website.

Carry and practice with a beacon, shovel, and probe. Dig and test for instability. And, If there is any doubt, the answer is to avoid slopes steeper than 30 degrees. 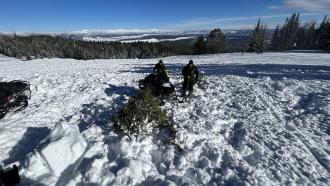 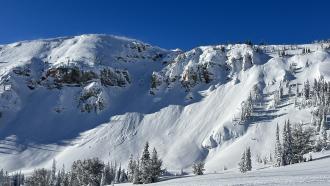 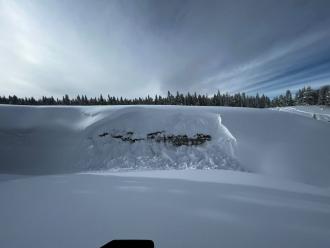 From instagram: "Right off the trail at tepee creek just before the cabin. A natural 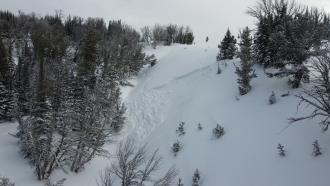 From FB message: “Near Sage Creek/Sage Mountain in carrot basin. This was a east facing