Good morning. This is Alex Marienthal with the Gallatin National Forest Avalanche Forecast on Monday, January 2nd at 6:50 a.m. This information is sponsored by Spark R&D and onX. This forecast does not apply to operating ski areas.

On December 31, 2022 a snowmobiler was killed in a very large avalanche north of Cooke City. One rider in a group of two triggered the avalanche, was carried 600 vertical feet, and buried 5 feet deep. He was located with a probe line an hour after the avalanche happened and was unable to be revived. Our deepest condolences go out to the family, friends, and those involved with the rescue and recovery (Full details and photos here).

This morning there is no new snow, temperatures are single digits to teens F, and wind is out of the east to northeast at 0-10 mph. In the Bridger Range wind is east at 20 mph with gusts to 35 mph. Today will be mostly sunny with temperatures in the teens to low 20s F and light to moderate easterly wind.

A person can trigger large to very large avalanches breaking on buried weak layers. The avalanche that killed a snowmobiler on Saturday near Cooke City broke 1.5-4 feet deep on a layer of sugary, faceted snow below a very hard slab (video of site investigation). Snow from the past week was drifted onto the slope to further stress the weak layer towards breaking. Also, a snowmobiler triggered slide on Sheep Mountain near Cooke City broke 1-4 feet deep (video, details), and another on Lionhead ridge near West Yellowstone broke 2-4 feet deep (details). All these avalanches broke on buried persistent weak layers which means similar avalanches continue to be possible until the snowpack has an extended break from the stress of new and wind-drifted snow.

Avalanches of recently wind-drifted snow are also possible to trigger. These could be large enough to bury a person, and especially dangerous if they push you into hazards like trees, rocks, or over cliffs. Yesterday, skiers north of Bridger Bowl changed their plans after finding unstable snowpack test results below a slab of wind-drifted snow (observation), and there was a natural avalanche on Saddle Peak that involved recent wind-drifted snow (photo). Today’s east winds will form drifts in less common locations.

The snowpack depth is shallower in northern areas than further south, but the list of avalanche concerns and travel advice is the same. Carefully assess the snowpack on each steep slope you plan to ride or cross. Watch for signs of unstable drifts such as cracking across the snow surface and avoid steep slopes where you suspect buried weak layers exist. Slopes with a relatively shallower snowpack or where the snow depth varies greatly across a slope are the most suspect and first to be avoided, but you should dig and probe to look for buried weak layers before riding or crossing any steep slope. Today, buried weak layers and recently drifted snow make human-triggered avalanches possible and the avalanche danger is MODERATE.

Near Island Park a person can trigger large to very large avalanches that break on buried weak layers. Dave was riding in the Centennials yesterday and found these weak layers on some slopes, but not all which can make assessment tricky. See Dave's video for information on what he found and what to do about it. Either avoid steep slopes or dig to look for and assess buried weak layer before entering steep terrain. 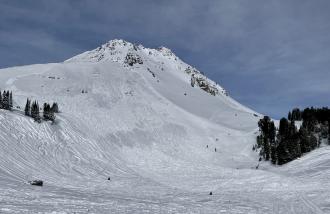 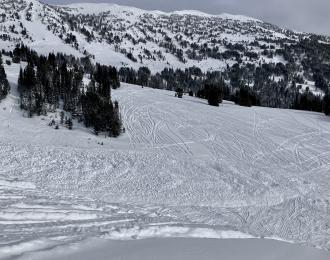 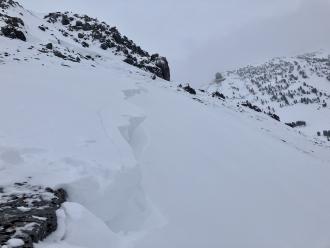 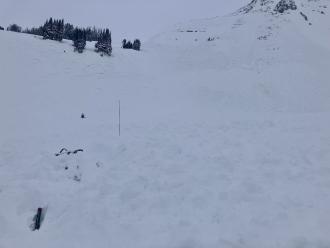 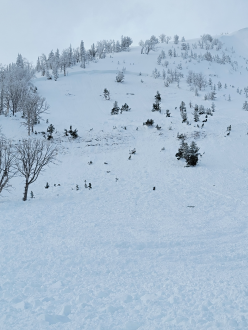 On the way back to Lionhead.  Came upon this recent avalanche.  Rushed up to the 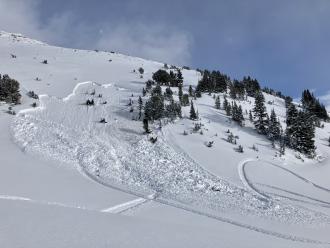 On 12/31 we saw an avalanche that appeared very recent, and likely triggered by a