Good morning. This is Dave Zinn with the Gallatin National Forest Avalanche Forecast on Tuesday, December 13th at 7:00 a.m. This information is sponsored by Alpine Orthopedics & Sports Medicine, Knoff Group Real Estate and Werner Wealth Management (Advisors with DA Davidson). This forecast does not apply to operating ski areas.

A persistent weak layer of sugary facets is buried 2-3 feet deep on many slopes around Cooke City and West Yellowstone and in the Southern Madison and Southern Gallatin Ranges. Natural and human-triggered avalanches have failed up to 6 feet deep on wind-loaded slopes on this weak layer within the last week (Avalanche Activity List).

Natural avalanches are unlikely today, but human-triggered avalanches are a dangerous possibility. Tracks on a slope do not indicate stability, and skiers or riders can trigger slopes from the flats below steep slopes, as Alex and his partner learned firsthand near Cooke City last Friday (video, photo).

While digging and performing a stability test can help us identify instability, the safest management strategy for large avalanches breaking on persistent weak layers is avoiding avalanche terrain and the runout zones below. While we know these weak layers are not on every slope, trying to outsmart the instability is a gamble with serious consequences.

In the mountains around Bozeman and Big Sky, human-triggered avalanches are possible on slopes loaded with drifts of snow by recent winds. Avalanches on Buck Ridge, in the Northern Bridger Range and on Mt. Blackmore are indicators of this instability. While slides like the ones in the Northern Bridgers and on Mount Blackmore are relatively small (6-10” deep), they are dangerous, especially when combined with terrain traps like trees, cliffs or rocks.

Some slopes have a weak layer of facets below the wind-drifted snow. Sunday on Saddle Peak, Alex found hard slabs of wind-drifted snow sitting on top of weak facets. This is a dangerous setup for now and later in the season (video). While ice-climbing in Hyalite late last week, Doug noted a 10” thick drift was sitting on a thin layer of weak facets (Hyalite gullies video). The presence of weak layers means slopes stabilize more slowly, and avalanches could propagate across larger areas.

Not all slopes have the ingredients for an avalanche (a slab over a weak layer). Yesterday, I found a generally stable snowpack on a tour to Mount Ellis (video). This means you have homework. Dig down to look for a sugary layer of faceted snow. Assess for instabilities with an extended column test before considering skiing or riding in avalanche terrain (ECT informational video).

The avalanche danger is MODERATE.

The mountains in Island Park have received over 2 feet of snow since Friday morning. Strong winds this weekend created drifts up to 4 feet deep. Avalanches failing within the recent and wind-drifted snow are possible today. Ian and I found a weak layer of facets buried 2-3 feet deep at lower elevations while riding in the Yale Creek Drainage on Friday (field video). Minimize your exposure to wind-loaded slopes and dig down 3-4 feet to look for a weak layer of sugary facets that makes larger avalanches possible.

Submit your snow, avalanche and weather observations to contribute to the Island Park Trip Planning page. 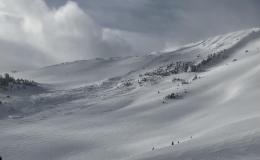 On Dec 9, 2022 around 1:30pm we triggered this avalanche while riding across the lower 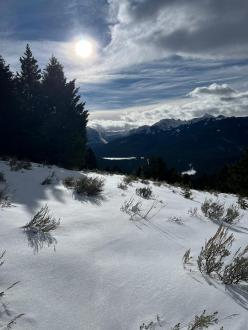 "Large slough or slide in Hyalite today. Taken from Lick Creek. Looks like either land 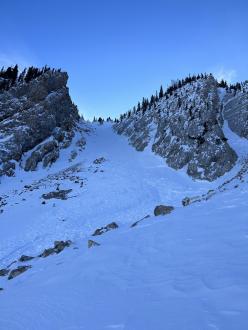