Good morning. This is Doug Chabot with the Gallatin National Forest Avalanche Forecast on Tuesday, December 6th at 7:00 a.m. This information is sponsored by Cooke City Super 8/Bearclaw Bob’s and Archer Construction. This forecast does not apply to operating ski areas.

*Note: Today, Bridger Bowl Ski Area will close to ALL uphill travel at 5 p.m. The ski area opens on Friday.

Since yesterday morning Cooke City has received 3” of new snow, the only area with accumulation. Wind is strong and steady out of the west-southwest at 15-25 mph with gusts of 55 mph. Mountain temperatures are near 10F and will warm to 20F. Today, wind will continue and 1” of snow will fall around Cooke City and West Yellowstone. Tonight will be clear and cold throughout southwest Montana. More snowfall is expected later in the week.

The southern mountains, including the area around Cooke City and West Yellowstone have gotten 2-3 feet of snow in the last week (weather log). This was followed by natural avalanche activity near Cooke City (Sheep Mountain, Fox Mountain, Republic) and Lionhead (Airplane Bowl, Lionhead Ridge). Although snowfall has tapered off, wind has not. Wind redistributes snow and creates thick slabs. As far as the snowpack is concerned, it is still snowing out and the potential to trigger avalanches is likely. Weak layers of sugary or feathery snow are buried 2-4 feet deep, further compounding the instability.

Alex was in Cooke City last week and made a video explaining his concerns with the new snow avalanching. Dave rode into Taylor Fork on Thursday and found similar conditions that he outlined in his video. The snowpack needs time to adjust to the last 7-days snowfall. It is not advisable to get into avalanche terrain as avalanches can break 2-4 feet deep; large and deadly. With wind and snow continuing, both natural and human triggered slides could occur and the avalanche danger is rated CONSIDERABLE on all slopes.

Yesterday, in the Bridger Range 2 skiers were caught in an avalanche. They were uninjured. We have no details on the 5 Ws (who, what, when, where, why), but the fact that skiers triggered and were caught in a slide is valuable bulls-eye data. Wind is blowing strong with gusts reaching 55 mph from the west at the ridgeline. Winds are also blowing and moving snow at mid-elevations. Yesterday’s 8” of new snow will be drifting in gullies and open slopes. Turn around at the first sign of cracking because that might be your only warning before triggering a slide. For today the avalanche danger remains CONSIDERABLE.

Yesterday, in Hyalite, a skier intentionally triggered a 12-18” deep wind-drifted slope in Lick Creek (photo). Further in the range, Dave and his partner toured into Divide Peak and had concerns with new, wind-blown snow. In his video he warns us about wind-loading. Gullies hold drifts and can be dangerous, especially for ice climbers. Further south around Big Sky the story is similar: without widespread weak layers we are worried about triggering thick drifts of wind-blown snow. Cracking in a drift is a clear sign they can avalanche and you should not go further. For today, it remains possible to trigger avalanches and the danger is rated MODERATE.

The Island Park area has gotten 2 feet of snow in the last week. Although the snowfall has tapered off, the wind has not. Wind redistributes snow and creates new loading. As far as the snowpack is concerned, it is still snowing out. The snowpack needs time to adjust to this new load and it is not advisable to get into avalanche terrain. Avalanches can break 2-4 feet deep. They can be large and deadly. 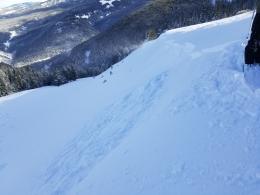 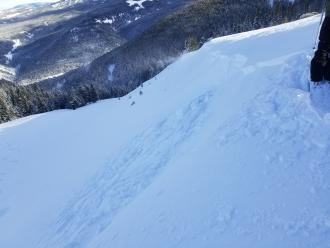 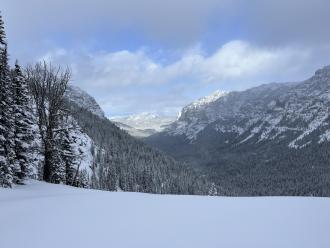 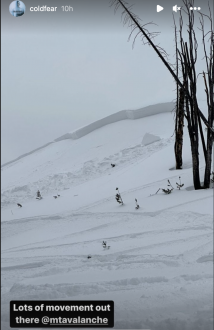