This is Ian Hoyer with pre-season avalanche, weather and event information for the Gallatin National Forest Avalanche Center on Friday, October 28th. This information is sponsored by The Friends of the Avalanche Center. Join them in supporting free and low-cost avalanche education, community outreach and avalanche center operations during the 2022 Virtual Powder Blast.

After the big storm last weekend, snowfall tapered off on Monday night leaving an additional couple inches near West Yellowstone and Cooke City. Through the rest of the week there were occasional flurries without substantial accumulation. High temperatures in the mountains have been right around freezing. The coming days will bring continued cool, dry conditions and moderate winds, with perhaps a bit more sun than this past week. The next chance for snow isn’t until the middle of next week.

For current weather data, check our weather stations in Cooke City, Hyalite, Lionhead and on Sawtelle Peak near Island Park, ID. Also, utilize the ski area weather stations from Big Sky, Bridger Bowl and Yellowstone Club, and SNOTEL sites throughout our advisory area. We will also update the Weather and Avalanche Log daily throughout the fall..

A fundamental change has occurred in the past week - there is now snow in the mountains and avalanche season has begun. Over the coming days it will become patchier as sunny and lower elevation slopes melt out, but on shady, high elevation slopes there are 2-4 ft of snow and we are starting to develop the foundations of the winter’s snowpack.

We received reports of a couple avalanches during and after last weekend’s storm, including a large natural avalanche at Big Sky Resort, which is closed and currently has a snowpack similar to the backcountry (Big Sky avalanche details). Avalanches become less likely as we get away from the last snowfall, but can’t be forgotten about.

Throughout the fall, your safe options are either to completely avoid steep snow-covered slopes  or to follow avalanche safety protocols by having a partner, backing out of steep terrain when signs of instability present themselves, traveling one at a time in terrain steeper than 30 degrees, and carrying rescue gear that you’ve practiced using (avalanche beacon, shovel, and probe). These rules apply regardless of the activity that you’re pursuing and apply even to crossing steep wind drifts while the surrounding terrain is bare ground..

Your observations are more important than ever during the early season as we get to know this season’s snowpack. If you get out, please share avalanche, snowpack or weather observations via our website, email (mtavalanche@gmail.com), phone (406-587-6984), or Instagram (#gnfacobs). NEW THIS YEAR is a page on the website populated with your observations (you must opt-in for observations to be shared publicly).

We’ll be updating the Weather and Avalanche Log daily and issuing pre-season bulletins as needed throughout the fall as conditions warrant.

We are not issuing danger ratings.
There is snow on the ground and avalanche season is here. EITHER avoid steep snow-covered slopes OR follow avalanche safety protocols by having a partner, backing out of steep terrain when signs of instability present themselves, traveling one at a time in terrain steeper than 30 degrees, and carrying avalanche rescue gear.

The Utah Avalanche Center Snow and Avalanche Workshop is a great opportunity available online from 6-9 PM on November 2 and 9. 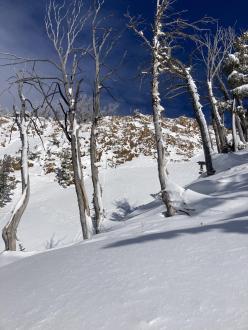 END_OF_DOCUMENT_TOKEN_TO_BE_REPLACED
Cracking in a Drift 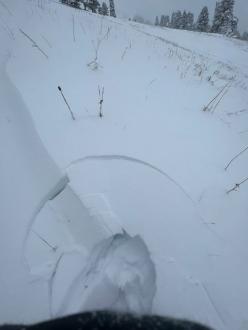