Good morning. This is Dave Zinn with the Gallatin National Forest Avalanche Forecast on Wednesday, April 6th at 7:15 a.m. This information is sponsored by Upper Yellowstone Snowmobile Club, Klim and Yellowstone Ski Tours. This forecast does not apply to operating ski areas.

The mountains around Cooke City received 16” of snow equal to 1.6” of snow water equivalent (SWE) in the last two days, creating dangerous avalanche conditions. Strong winds built slabs of drifted snow that are likely to avalanche. Avoid steep, wind-loaded slopes where large avalanches are the most likely. Watch for the stiffening of the snow surface and increasing depth in unusual locations because strong winds spared few areas. A small drift could be dangerous when combined with terrain features such as cliffs or trees (photo).

On slopes unaffected by the wind, evaluate the stability carefully by assessing how the new snow bonded to the old snow surface and checking for weak layers buried 2-3’ deep. While slides breaking within the old snow are less likely after last week’s warm-up, the resulting avalanche would be large and destructive.

Today, human-triggered avalanches are likely, and the danger is CONSIDERABLE.

Heightened avalanche danger exists in the Northern Gallatin and Northern Madison Ranges where 9-11” of snow (0.9-1.1” of SWE) fell in the last two days. Strong winds stripped snow from some slopes and loaded it onto others. During avalanche mitigation work, the Big Sky Ski Patrol triggered slides up to 2’ deep in wind-loaded terrain. A much smaller avalanche was responsible for injuries to a skier near Wilson Peak a day prior to the storm (details and photos). Ian and his partner listed wind-drifted snow as their primary avalanche concern with an additional warning that the wet snow avalanche danger will rise as the new snow warms (video).

Today, select low-angle terrain if you observe signs of wind-loading (photo) or instability such as recent avalanches, shooting cracks or collapsing. Human-triggered avalanches are possible and the danger is MODERATE.

In the Bridger, Southern Madison and Southern Gallatin Ranges and the Lionhead area, 4-6” of new snow fell in the last two days accompanied by strong winds. Yesterday, north of Bridger Bowl, I found that strong winds created drifts on many slopes and planned to avoid them on larger alpine faces and in technical terrain (video).

Wet snow avalanches will become a concern later this afternoon or tomorrow. If you see wet rollerballs or pinwheels of snow coming down the slope, the danger is increasing, move to shadier aspects.

Today, human-triggered avalanches are possible on wind-loaded slopes where the danger is MODERATE. The danger is LOW on all other slopes. Avalanches breaking deeper in the snowpack are unlikely but not impossible.

We are not issuing danger ratings.
In the Bridger, Southern Madison and Southern Gallatin Ranges and the Lionhead area 4-6” of new snow fell in the last two days accompanied by strong winds. The first concern is avalanches on slopes loaded by wind-drifted snow and as the skies clear and temperatures warm a secondary concern of wet snow avalanches within the recent snow will increase.
The Last Word

Our final daily avalanche forecast for the 2021-22 season will be April 10th. Thank you to everyone who has followed along, submitted field observations and donated to the Friends of the Avalanche Center. We are grateful to be a part of your winter. We will continue to provide periodic avalanche conditions updates through the month of April as conditions warrant. 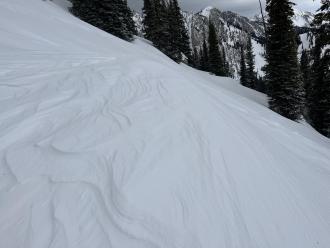 A large drift on the Ramp just north of Bridger Bowl. Photo: GNFAC 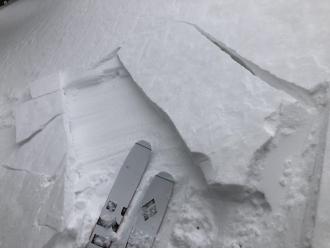 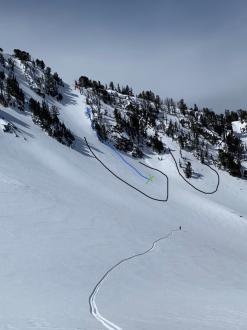