Good morning. This is Alex Marienthal with the Gallatin National Forest Avalanche Forecast on Sunday, March 13th at 7:00 a.m. This information is sponsored by Upper Yellowstone Snowmobile Club, Gastrognome, and Chad Bunting-Financial Advisor-Edward Jones. This forecast does not apply to operating ski areas.

As snowfall ended yesterday morning the mountains near West Yellowstone and Cooke City got 1” of snow. This morning temperatures are teens to 20s F and low 30s F in the Bridger Range. Wind has been southwest at 15-25 mph with gusts of 25-55 mph. Today, temperatures will reach high 20s to low 30s F with continued moderate to strong southwest wind, and snow showers will favor Cooke City and West Yellowstone with 3-5” and 1-2” elsewhere.

Today near Cooke City dangerous avalanche conditions will develop on slopes that are being loaded by wind-drifted snow. Yesterday we saw at least seven natural and human triggered, small avalanches which broke 6-10” deep and relatively wide on a hard melt-freeze crust (details and photos, details and photos). A few more inches of snow through today with moderate to strong southwest winds will grow thicker slabs and make large avalanches likely on wind-loaded slopes. Avalanches can potentially break deeper and wider on weak layers buried over 2 feet deep (Crown Butte video, Scotch Bonnet avalanche video). Today, avoid steep wind-loaded slopes, and before riding any steep slopes carefully assess the snowpack for potential instabilities. Avalanche danger is CONSIDERABLE on wind-loaded slopes and MODERATE on all other slopes.

Yesterday in the northern Bridger Range a snowboarder triggered and was caught in an avalanche that broke 4-8” deep and 100 feet wide. They were not injured (photos and details). Another group had slabs of snow cracking around their skis and retreated from steep terrain (details). Near Bozeman and Big Sky, over the last 72 hours strong west-southwest winds drifted snow into dense slabs that can still be triggered by a person today. Near West Yellowstone and the southern Madison Range, wind increased over the last 24 hours and formed similar fresh drifts that are possible to trigger. These slabs may be unstable where they sit on a hard melt-freeze crust or soft, sugary weak facets (Lionhead video, Cabin Creek Video). Before riding steep slopes, carefully assess the snowpack for buried weak layers and avoid slopes where you see signs of snow that was recently blown into thick drifts or slabs. Avalanches are possible to trigger and avalanche danger is MODERATE on wind-loaded slopes and LOW on other slopes.

Here is an all-time favorite presentation on Decision-making in extreme situations. It was presented at a Professional Development Workshop in Bozeman in 2019. 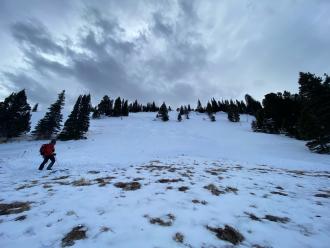 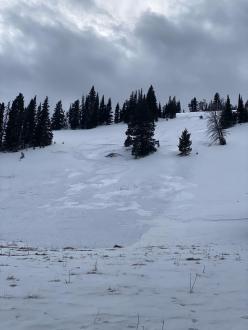 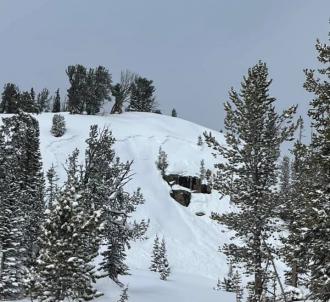 END_OF_DOCUMENT_TOKEN_TO_BE_REPLACED
Avalanche crown near Round Lake 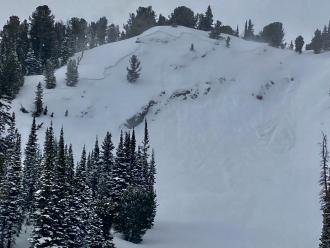 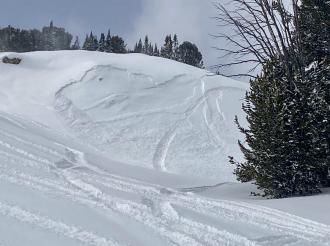 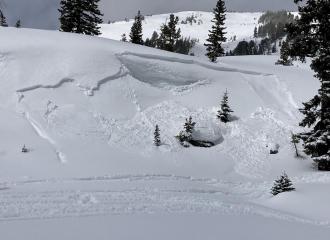