Good morning. This is Doug Chabot with the Gallatin National Forest Avalanche Forecast on Wednesday, March 9th at 7:00 a.m. This information is sponsored by Chad Bunting-Financial Advisor-Edward Jones, Madison-Gallatin Chapter of Wild Montana, and The First National Bank of Gilbert, MN. This forecast does not apply to operating ski areas.

Yesterday afternoon the storm ended and the mountains from Big Sky to West Yellowstone received another 4” with 1-2” falling everywhere else. This morning under mostly clear skies mountain temperatures are -10F to -15F with light north to east wind averaging 5-10 mph. Lionhead is showing gusts of 27 mph. No new snow is expected today and temperatures will rise into the single digits with light E-N wind switching westerly later today.

The Lionhead area near West Yellowstone received 8-10” of snow with this storm that equals .5” of snow water equivalent (SWE). A north wind started to blow last night. It is averaging 15 mph and gusting to 27 mph, strong enough to move and drift snow. Last Thursday Ian and I found a 1-foot thick layer of weak snow at the surface (video) and saw a recent avalanche (photo) on a wind drifted slope. Today’s wind-loading will make slopes dangerous. Triggering avalanches is likely and I expect natural avalanches at the ridgeline. Plumes of blowing snow and shooting cracks are a warning to stay out of avalanche terrain. For today the avalanche danger is rated CONSIDERABLE on wind-loaded terrain and MODERATE on all others.

In the last 36 hours the Bridger, Gallatin and Madison Ranges received 7-10” of low density powder (5%) equaling .4-.5” of snow water equivalent (SWE). Yesterday afternoon far-running new snow avalanches were seen on the Bridger ridge by Saddle Peak. Yesterday, Dave and his partner took a tour up Lick Creek in Hyalite and got shooting cracks and triggered a small avalanche in the new snow on a steep rollover (video, picture). Although the slide was inconsequential, it was a warning that bigger slides could be triggered at higher elevations where there’s more snow. Wind is forecasted to be light, but if wind increases the avalanche danger would rise quickly on any slope getting loaded. For today the avalanche danger is a serious MODERATE danger because of all the new snow. Shooting cracks or finding freshly blown wind drifts are signs to stay out of avalanche terrain.

The mountains around Cooke City received 4” of new snow (.3” SWE) during the last 36 hours. Yesterday, Ian and his partner looked at an avalanche on the NE shoulder of Scotch Bonnet that was triggered on Sunday (video). A thin layer of weak snow underlies a 2-foot thick slab. A steady and pervasive trickle of human triggered slides in the last couple weeks will continue (avalanche activity list). The weak layer and slab combination is widespread and on a few slopes it awaits a trigger. Stack the deck in your favor by carrying rescue gear, traveling one at a time in avalanche terrain and by being aware of what’s under your feet or sled. For today the avalanche danger is rated MODERATE since avalanches are possible.

Here is an all-time favorite presentation on Decision-making in extreme situations. It was presented at a Professional Development Workshop in Bozeman in 2019. 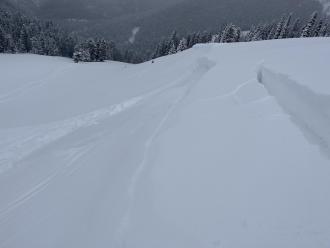 As we moved along a steep break over near Lick Creek, we triggered shooting cracks 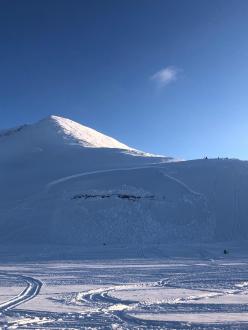 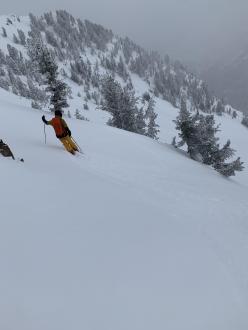