Good morning. This is Alex Marienthal with the Gallatin National Forest Avalanche Forecast on Monday, February 28, at 7:00 a.m. This information is sponsored by Alpine Orthopedics & Sports Medicine, Stronghold Fabrication and Cooke City Motorsports. This forecast does not apply to operating ski areas.

This morning, there is no new snow, temperatures are teens to low 30s F, and wind is southwest-west at 10-25 mph with gusts of 25-60 mph. Today, temperatures will reach high 20s to high 30s F with low 40s F in the Bridger Range. Wind will become stronger out of the west-southwest with average speeds of 15-30 mph and gusts of 30-50 mph. Skies will be mostly cloudy today with 1-3” of snow possible by mid-morning tomorrow.

Recent strong wind out of the southwest-west drifted snow into 6-18” thick hard slabs on top of weak, sugary snow. These wind slabs are possible for a skier or rider to trigger today. Yesterday skiers in Hyalite and the southern Gallatin Range had shallow wind slabs crack wide under their skis (photos and details). On Saturday in the northern Bridgers three separate groups of skiers triggered slabs of wind-drifted snow 8-18” deep, some were hundreds of feet wide. One person was caught, but unharmed (details and photos, details and photos, details and photos). On Baldy Peak a skier triggered a similar hard slab, 6” deep and 100’ wide (photo). These and other recent avalanches are evidence that an unstable snowpack can be found on wind-loaded slopes near Bozeman, Big Sky and West Yellowstone (Mt. Blackmore photo, Blaze Mtn. photo, Tepee Basin photo).

On wind-loaded slopes avalanches are possible and avalanche danger is MODERATE. Without recent drifts of snow, avalanches are unlikely and danger is LOW on non-wind loaded slopes. Dave skied in Specimen Creek yesterday and found a weak snowpack that needed a slab on top to be unstable (video). Before riding on steep slopes carefully assess the potential for wind-loading and buried weak layers.

Yesterday my partners and I rode north of Cooke City and saw five recent skier and rider triggered slides. Most were small soft slabs (photo and details, photo) and one hard slab broke more than 3 feet deep (photo). While touring up a slope we collapsed the snowpack and heard a “whumph” under our skis. We dug and found a layer of weak snow buried 8-10” deep which created the instability (video). This setup makes avalanches possible to trigger. These slides will probably be small, and are most hazardous if they push you into trees or off a cliff. Continued strong southwest-west wind today will grow larger slabs and add weight to deeper buried weak layers.

Triggering an avalanche on weak snow buried 2 feet deep is much less likely than it was a week ago, but the consequences of being caught are potentially deadly. Examples of this type of avalanche are two large snowmobiler triggered avalanches last weekend, one of which was fatal (Miller Mountain fatality video, Mt. Abundance video, details). Before you travel on steep slopes, carefully assess the snowpack for potential instabilities and consider the consequences of being caught in a slide. Strong wind will drift snow today and make large avalanches possible. The avalanche danger is MODERATE on wind-loaded slopes. On non-wind loaded slopes avalanche danger is LOW because avalanches will be small or are unlikely, but not impossible.

A detailed report on last Saturday’s avalanche that killed a snow biker outside Cooke City is posted online. The video describing the avalanche can be viewed here. 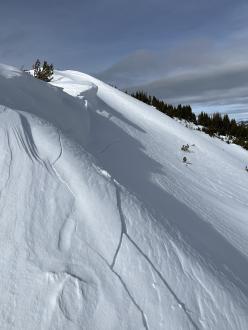 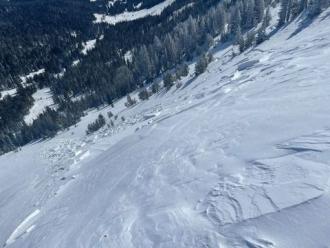 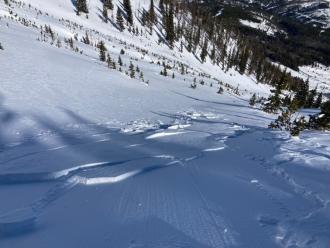 From message 2/27/22: "Skier triggered yesterday in a northeast wind loaded pocket on baldy in 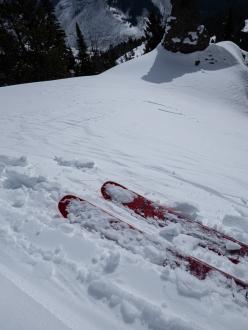 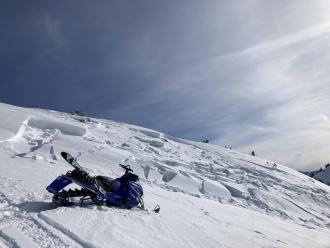 We saw this avalanche the afternoon of 2/27/22, on a north facing slope on Sheep 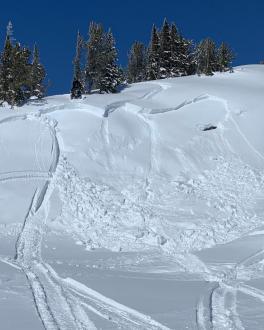 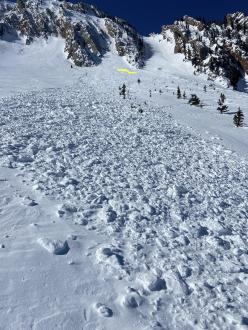 From email 2/26/22: "Skiing in the Northern Bridgers today, one skier in our party of

END_OF_DOCUMENT_TOKEN_TO_BE_REPLACED
Crown of a skier triggered avalanche in N. Bridgers 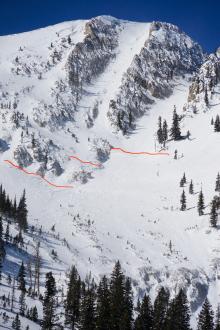 Crown of avalanche that was remote triggered by a skier on 2/26/22. Photo: M. Cohen