Good morning. This is Dave Zinn with the Gallatin National Forest Avalanche Forecast on Monday, February 21st, at 7:15 a.m. This information is sponsored by Bill and Kay Whittle of the Antlers Lodge in Cooke City. This forecast does not apply to operating ski areas.

Late Saturday afternoon, a group of 3 snowmobilers and 2 snowbikers were in the Sheep Creek drainage, north of Cooke City. The two snowbikes were high on a slope near Miller Mountain when one stopped on a small ridge and the other climbed higher triggering a large avalanche. The avalanche carried him down through a gully and over a waterfall where he was partially buried. His arm and airbag were visible and his head was 1 foot under the surface. Resuscitation efforts were unsuccessful and Park County SAR evacuated the victim. The avalanche was 800 feet wide, averaged 2 feet deep (estimated) and ran 1200 feet vertical. The avalanche likely broke on facets and depth hoar at the ground in an area that was thinly covered and recently wind-loaded. The debris was up to 15 feet deep and the avalanche size is rated R3-D3. We will release a full report with details in the coming days. Preliminary information and photos are available here. Our condolences go out to the family and friends of the rider.

It is cold this morning with temperatures in the single digits above and below zero F and 5-10 mph winds from the west except in the Bridger Range where they turned east. In the last 24 hours, the Bridger Range received 13” of snow with 5-9” near Cooke City, Big Sky and south of Bozeman and 1-4” from the Taylor Fork to Lionhead areas. Today, high temperatures will be in the single digits F before plummeting this evening and a frigid east wind will settle in for the first half of the week. Flurries today will deliver up to an inch of new snow.

Dangerous avalanche conditions exist in the mountains around Cooke City and human-triggered avalanches are likely. In the last week, snow fell every day totaling 18” equal to 1.5” of snow water equivalent (SWE). Winds gusted 45 mph yesterday, drifting snow onto slopes with weak layers buried 18-30” under the surface. Today, avalanches could range from relatively small to large. Saturday’s fatal avalanche broke approximately 800’ wide, flowed through two gullies and piled debris 15’ deep (photos and preliminary details). An intentionally triggered avalanche on Ski Hill broke 15” deep and 30-50’ across. The likelihood of surviving a slide on the large end of this spectrum is not high. Utilize careful route-finding and largely avoid slopes over 30 degrees. Carefully assess the snowpack if you choose to enter steeper terrain. Avalanches will be most sensitive to triggers on or near terrain features with drifts from yesterday’s strong winds. The danger is rated CONSIDERABLE in Cooke City.

Human-triggered avalanches are possible in the mountains around Bozeman, Big Sky and West Yellowstone. The Bridger Range and the mountains around Big Sky received 9-13” of snow equal to 0.4-0.9” SWE with slightly less in the Northern Gallatin Range and Lionhead areas. In areas with more new snow, loose snow avalanches or sluffs will pack a punch as they gain significant volume. It is possible to trigger a dangerous slab avalanche where the wind has drifted the snow and where the new snow is sitting on weak layers buried 1-2’ under the surface. Scale up the slope size from Saturday’s rider-triggered avalanche near Two Top and you have a significant problem (photos and details). During last week’s field days to Hyalite, Buck Ridge and the Bridger Range, we saw small avalanches that broke in the new and wind-drifted snow. As the winds shift to the east and increase through the day, expect drifts to form in abnormal locations.

Evaluate the snowpack carefully and avoid terrain features such as drifts, steep rollovers and terrain traps where avalanches are more likely or have more significant consequences. The danger is MODERATE.

The Southern Madison and Southern Gallatin Ranges received 1-3” of new snow equal to 0.1” of SWE. Yesterday’s strong winds drifted snow onto slopes with weak layers of facets and surface hoar buried 6-12” deep. It is possible to trigger an avalanche on slopes where recent drifts sit on top of weak layers. Outside of isolated instabilities, avalanches are unlikely on slopes without wind drifted snow.

Watch for signs of recent wind loading such as hard, drum-like slabs or cracking in the upper snowpack, assess stability and follow safe travel protocols. The avalanche danger is MODERATE on wind-loaded slopes and LOW on all others. 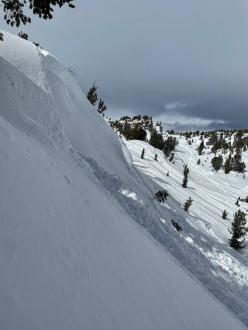 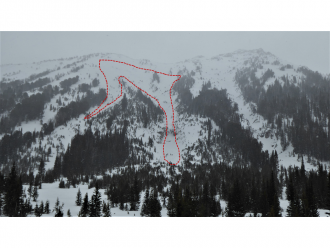 Avalanche overview with the crown and path marked. The slide was 800' wide, 1200' vertical 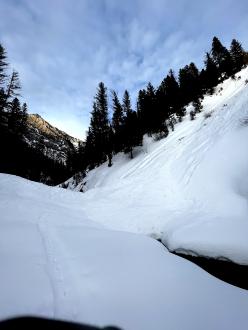 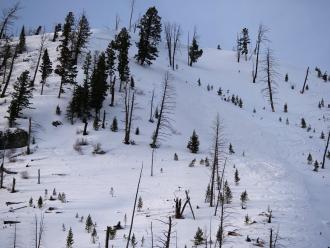