Good morning. This is Dave Zinn with the Gallatin National Forest Avalanche Forecast on Monday, February 7th, at 7:00 a.m. This information is sponsored by Cooke City Motorsports, Yellowstone Ski Tours and Werner Wealth Management (Advisors with DA Davidson). This forecast does not apply to operating ski areas.

We are sad to report that yesterday, February 6th, a snowmobiler was caught by an avalanche in the Lionhead area outside of West Yellowstone. The rider was carried into trees and life-saving efforts on-scene were unsuccessful. Doug responded with the Gallatin County Sherriff Search and Rescue team yesterday and will return to the accident site today to complete an investigation. Our deepest condolences go out to the family and friends of the rider.

We will release further details as they are available.

There is no new snow this morning. Temperatures are in the low teens to low 20s F and winds are blowing 10-25 mph from the west. Today, temperatures will be 30-40 degrees F with strong winds focused around Bozeman, Big Sky and Cooke City blowing 15-30 mph from the west to southwest. Light snow will return to the area tomorrow morning.

Snowfall between Friday night to Sunday morning dropped 12-14” of snow in the mountains around Cooke City with up to 0.9” of snow water equivalent (SWE). Human-triggered avalanches are likely on slopes where 15-20 mph winds are transporting this snow into unstable slabs. Alex saw evidence of recent natural avalanches on Miller Mountain and explained in his video yesterday that the new and drifted snow is sitting on top of a weak layer of facets creating dangerous avalanche conditions. Other skiers in the Cooke City area observed recent natural avalanches on Woody Ridge and just outside the advisory area in Yellowstone National Park. All of these avalanches are failing on weak layers of snow now buried 18-24” deep (photo). Avoid wind-loaded slopes where avalanches are likely, and the danger is CONSIDERABLE. Avalanches are possible on non-wind-loaded slopes and the danger is MODERATE. Carefully evaluate the snowpack and avoid areas with terrain traps that would amplify the consequences of an avalanche.

Two nights ago, 4” of snow fell in the Northern Gallatin Range equal to 0.3” SWE adding to the 10” earlier in the week. The wind increased late yesterday afternoon and will continue to transport recent snow into unstable drifts where avalanches large enough to injure or bury climbers, skiers and riders are possible. On Saturday, a group in the Flanders drainage witnessed snow pouring off an ice climb that “probably would have slammed a climber off the route” (details). Today, carefully assess the snowpack paying special attention for signs of wind-loading such as blowing snow and shooting cracks in the snowpack. Avoid terrain where features like trees, cliffs and rocks act as terrain traps and smaller avalanches would be dangerous. Human-triggered avalanches are possible today, and danger is MODERATE.

Sadly, a rider triggered a fatal avalanche on Ski Hill in the Lionhead area yesterday. The shallow slide broke across the slope on a steep rollover and the rider was swept into trees and partially buried. Unfortunately, life-saving efforts on-scene were unsuccessful (limited details and photos). Nearby, a different group triggered a small, relatively harmless avalanche that failed 12” deep on buried weak layers (details and photos). In the Southern Gallatin Range a group of skiers got a “whumph” on a small, isolated slope at low elevations, another indicator of weaker snow. Large avalanches in the West Yellowstone area and near Big Sky and in the Bridger Range are unlikely with the above activity being the tragic exception to overall stability. Additionally, these events signify more trouble to come when the wind blows or snow returns.

There is not much soft snow left for transport in the Northern Madison and Bridger Ranges, but windy conditions today may create small drifts adding to those formed this weekend where you could find isolated instabilities especially where they are combined with buried weak-layers 6-18” under the snow surface (photo). Assess the snowpack for localized instabilities prior to entering steep terrain and evaluate the terrain for features that amplify the consequences of small avalanches. The danger is rated LOW.

King and Queen of the Ridge Results

Thank you and great work to everyone who participated in this year’s King and Queen of the Ridge event. This year we set a fund-raising record of $29,345! We are greatly appreciative of the support from everyone who hiked, donated, and raised money for The Friends of GNFAC. The King of the ridge this year is Casey Bloomer with 30 hikes, and Queen is Jennifer Allen with 22 hikes! Full Results Here.

See our education calendar for an up-to-date list of all local classes. Here are a few select upcoming

We are sad to report that yesterday, February 6th, a snowmobiler was caught by an avalanche in the Lionhead area outside of West Yellowstone. The rider was carried into trees and life-saving efforts on-scene were unsuccessful. Our deepest condolences go out to the family and friends of the rider (limited details and photos).

We will release further details as they are available. 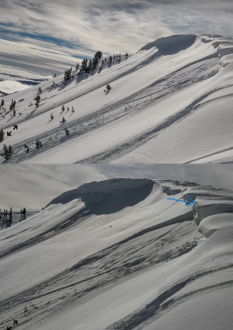 From Obs: "Today I watched as a sledder dropped a cornice causing the cornice to 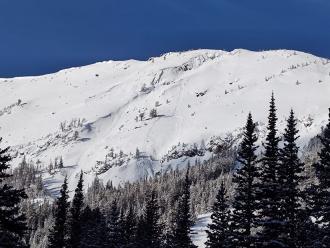 Skiers observed several slab avalanches on the east face of Woody Ridge. They broke about

END_OF_DOCUMENT_TOKEN_TO_BE_REPLACED
Responding to an avalanche in Lionhead 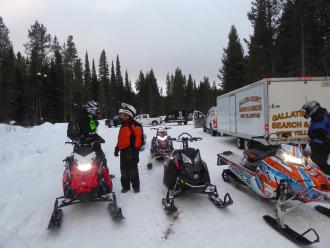 On Sunday, February 6, Gallatin Country Sheriff Search and Rescue and the GNFAC responded to