Good morning. This is Dave Zinn with the Gallatin National Forest Avalanche Forecast on Monday, January 24th at 7:15 a.m. This information is sponsored by Montana State Parks and the Yellowstone Club Community Foundation. This forecast does not apply to operating ski areas.

This morning, mountain temperatures are in the teens F and winds are 15-20 mph from the west except in the West Yellowstone and Cooke City areas where they are 5-10 mph from the northwest. Temperatures today will be in the 20s F with 10-15 mph winds from the west shifting to the north through the day. Snow will begin this afternoon and the mountains around Bozeman will have 2-4” by morning with 1-2” elsewhere in the advisory area.

Yesterday, the wind blew 20-30 mph in the Southern Gallatin and Southern Madison Ranges and the mountains around Cooke City and created 1-2’ drifts of snow on top of a weak layer of buried surface hoar. Human triggered avalanches are possible on slopes where recent drifts of snow and this weak layer overlap. Avalanches are unlikely on slopes missing one of these two ingredients, as Alex and Ian observed in the Taylor Fork prior to yesterday’s wind (video). Triggered by a group of skiers on Friday, a shallow slide that propagated across a steep couloir near Cooke City indicates of the type of avalanche you could trigger today (photo and details). Luckily, the skiers were sheltered from the slide and were unharmed.

Indicators of instability such as recent avalanches or cracks shooting from your skis, board or sled are clear signs that you found the unstable combo and should retreat. If signs of instability aren’t as obvious, dig down to look for the buried surface hoar and perform a quick stability test before entering steep terrain. Avalanches breaking on deeper weak layers are unlikely.

Dangerous, human-triggered avalanches are unlikely in the mountains around Bozeman, Big Sky and West Yellowstone. A weak layer of feathery surface hoar is buried under 6” of snow in the Lionhead area; however, the wind remained light and the overlying slab remains thin. In the mountains around Bozeman and Big Sky, strong winds created fresh drifts over the weekend, but wind-slabs like the one triggered on Saturday in the Northern Bridger Range have largely stabilized due to the lack of an underlying weak layer (photo of snowmobile triggered wind slab). Today, assess the snowpack for isolated areas of instability related to recent wind drifting and buried weak layers, follow safe travel protocols and be cautious on slopes where a small avalanche could sweep you into trees, rocks or off cliffs.

Overall, the snowpack is stable, and the danger is LOW.

The Beacon Park at Beall Park in Bozeman and the West Yellowstone Beacon Park are up and running! Stop by to check them out and practice with your rescue gear. 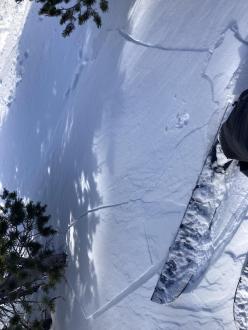 From Obs 1/23: "While on the ridgeline on the way up we triggered many small 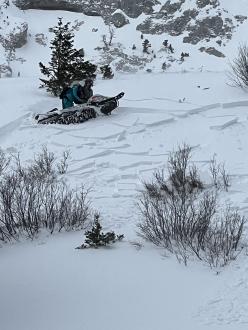 A snowmobile triggered wind slab on small slope in the northern Bridgers on 1/22/22.