Good morning. This is Ian Hoyer with the Gallatin National Forest Avalanche Forecast on Friday, January 21st at 7:00 a.m. This information is sponsored by Bridger Bowl, Cooke City Motorsports and Yellowstone Ski Tours. This forecast does not apply to operating ski areas.

In the last 24 hours the Bridger Range picked up 6-12” of new snow with 5-8” in the Madison and Gallatin Ranges, and 2-3” in Lionhead and Cooke City. Winds are westerly at 15-25 mph with gusts of 30-55 mph (slightly lighter around Cooke City). Winds today will be 15-20 mph out of the west with gusts to 30 mph. Temperatures are in the teens and 20s F this morning and will only rise a few degrees. As snowfall finishes this morning another 2-4” will accumulate around Bozeman and Big Sky with a trace-2” near West Yellowstone and Cooke City.

A foot of fresh snow (1.3” of Snow Water Equivalent) and moderate to strong west winds have built 2-3 ft deep wind drifts that will be easily triggered today across much of the Bridger Range. The area around Bridger Bowl got half as much new snow and will have thinner drifts. Look out for and avoid steep wind-loaded slopes. Don’t let powder fever take over. Stick to lower angled slopes and give the new snow time to settle and bond. An additional concern is the weak snow at the ground which just got stressed by a big load of new snow. If a slide broke on these lower layers it would be much larger and even more dangerous. Triggering avalanches is likely on windloaded slopes, where the avalanche danger is CONSIDERABLE. On non-windloaded slopes the avalanche danger is MODERATE.

Five to 8” of new snow drifting into cohesive slabs means it is possible to trigger 1-2 ft deep avalanches today. In the southern ranges this new snow fell onto a freshly buried surface hoar layer (Taylor Fork video), which will make avalanches break more easily. Non-windloaded slopes don’t have a thick or cohesive enough slab of new snow for it to be problematic. Cracks shooting out in front of your skis or sled indicate you’ve found a slope with a reactive wind slab. The avalanche danger is MODERATE on windloaded slopes and LOW elsewhere.

Only 2-3” of snow fell in the Lionhead area and near Cooke City. This is not enough new snow to increase the avalanche hazard. Watch out in very steep terrain where getting knocked off your feet by a small avalanche would be problematic and also be on alert if you find an isolated area with deeper drifts where you could trigger a larger slide. Overall, large avalanches are unlikely and the avalanche danger is LOW. 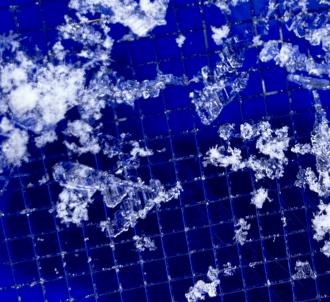 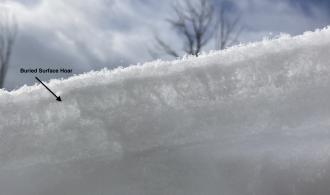 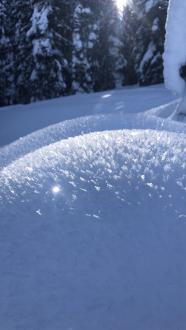