Good morning. This is Dave Zinn with the Gallatin National Forest Avalanche Forecast on Thursday, January 13th at 6:45 a.m. This information is sponsored by Uphill Pursuits and World Boards. This forecast does not apply to operating ski areas.

Temperatures are near to slightly above freezing in the northern portion of the advisory area and in the mid teens to 20 F in the southern areas with 10-20 mph winds from the west to southwest. Today, temperatures will climb to the low 30s F across most of the area and into the low 40s F in the Bridger Range before they drop off later this afternoon and evening. Winds will be 5-15 mph from the southwest and we will have a trace to 1” of new snow by morning.

Avalanche conditions are stabilizing in the southern portions of the advisory area as we become further removed from the last storm. However, as Doug and Ian noted from Lionhead, we are not ready to fully trust the snowpack because deeply buried weak layers still demonstrate the ability to fail and propagate, the two components necessary for a slab avalanche (video). Yesterday, a group in Cabin Creek spotted the crown of a large slide on Sage Peak in the Taylor Fork that likely broke early last weekend (details and photo). The destructive force of an avalanche of this size makes me think twice before jumping into steep terrain without a thorough snowpack assessment and evaluation of the terrain, even as slides become less likely. Last week’s avalanche activity in Cooke City provides a similar warning of the possibility of dangerous, human-triggered slides.

The avalanche danger is MODERATE with large, human-triggered avalanches possible.

While variable snow surface conditions exist in the Northern Madison, Northern Gallatin and Bridger Ranges (photo), the avalanche conditions are generally safe. Doug described these conditions in his video from Beehive Basin early this week. Two days ago, a group in the Northern Bridger Range remembered that low danger is not synonymous with no danger, so they continued to assess the snowpack as they climbed a steep couloir and backed off 150’ from the top when they found a weak structure that made them second guess stability. If you are exploring avalanche terrain, you should follow the same program, hunt for areas of isolated instability as a reason to back off your objectives while considering ways in which the terrain may amplify the effects of a small slide.

The avalanche danger is LOW, and human-triggered avalanches are unlikely.

January 20 + Field day. Our popular Avalanche Fundamentals with Field Course is perfect as a refresher or an introduction to avalanches. We are introducing a new format with four pre-recorded lectures to watch at your convenience, a live question and answer session, and a choice of a snowmobile or ski/ board-based field day occurring the following two weekends.

As we wait for the next dump of snow, now is an excellent time to practice avalanche rescue. Are you fast and efficient with your beacon? Is your partner? Even the sharpest knife needs an occasional tune. Check out this BCA video to hone your skills. 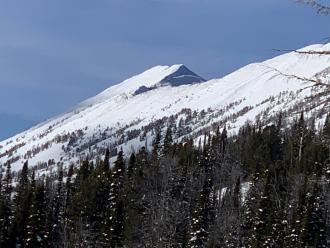 END_OF_DOCUMENT_TOKEN_TO_BE_REPLACED
7 feet of snow in Centennials 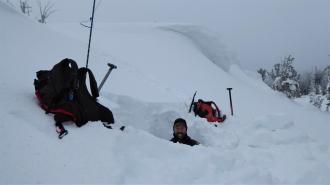 END_OF_DOCUMENT_TOKEN_TO_BE_REPLACED
Wind sculpting in the Bridgers 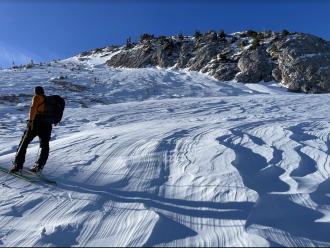 Strong wind over the last week created this surface texture in the Bridger Range. Photo