Good morning. This is Dave Zinn with the Gallatin National Forest Avalanche Forecast on Tuesday, January 11th at 7:00 a.m. This information is sponsored by Bridger Bowl, Cooke City Motorsports and Advanced Innovation. This forecast does not apply to operating ski areas.

This morning, winds are 10-20 mph from the southwest to northwest and mountain temperatures are in the teens to low 20s F with single digits F around West Yellowstone and Cooke City. The mountains around West Yellowstone got an inch of new snow while the remainder of the forecast area was dry. Today, temperatures will range from the mid 20s F in the southern areas to the mid 30s F in the Bridger Range. Winds will be 10-20 mph from the southwest and Cooke City may get a trace of new snow tonight.

Heavy snowfall in the southern portions of our advisory area ended on Saturday with storm totals peaking in the mountains around Cooke City (weather log). Strong winds transported snow and added additional load to slopes already on the edge. Correspondingly, riders and skiers submitted observations of natural and human-triggered avalanches (photo, photo, details, details). Today, avalanches breaking 1-3’ deep within recent drifts or storm snow remain possible, slides failing deeper on buried weak layers near the bottom of the snowpack are less likely but are not out of the question. While less snow fell in the Southern Madison and Southern Gallatin Ranges and the Lionhead area, the same setup exists as in Cooke City. Weaker snow in the middle and bottom of the snowpack heightens the danger until it fully adjusts to recent loading.

Carefully assess the snowpack for unstable weak layers, remain skeptical of recently wind-loaded slopes around ridgelines and cornices and follow safe travel protocols to limit your group’s exposure. Human-triggered avalanches are possible, and the danger is MODERATE.

Three days have passed since the last snowfall in the northern ranges of the advisory area and the wind no longer has access to soft snow for transport. Two days ago, a group of skiers in Beehive Basin triggered a significant cornice collapse that caused a small avalanche below but failed to propagate out to the wider slope (photos and details). Also in Beehive Basin this weekend, Doug and other groups reported thin wind drifts that cracked under their skis but generally found a stabilizing snowpack in which weak layers were not propagating failure (video). Skiers near Divide Peak reported similar conditions. Yesterday, the Big Sky Ski Patrol triggered an avalanche during avalanche mitigation that broke on weak layers near the ground, slides like this in the backcountry are unlikely today but this is a good reminder of why we assess slopes for areas of isolated instability.

Follow accepted safe travel practices with one person exposed to hazard at a time and manage your use of terrain to minimize the potential harm from small slides. The avalanche danger is rated LOW.

We are sad to report, On Saturday in Colorado, two snowshoers and their dog were buried and killed in an avalanche. Our deepest condolences go to those affected by this tragedy. Preliminary info from CAIC. 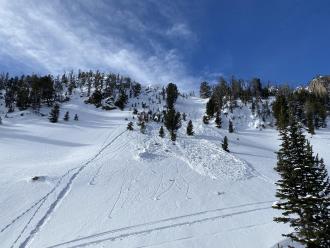 From email 1/9/22: "Skier triggered cornice failure avalanche. Broke at skis 10-12 feet from the 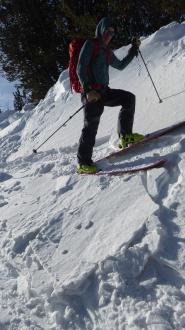