Good morning. This is Ian Hoyer with the Gallatin National Forest Avalanche Forecast on Wednesday, January 5th at 7:00 a.m. This information is sponsored by Fremont County Search & Rescue. This forecast does not apply to operating ski areas.

There are 3” of new snow in most areas this morning with 5” in the Bridger Range. Winds have been 10-20 mph out of the west with gusts of 30-40 mph. Similar winds will continue today. Temperatures are single digits to teens F. Temperatures will fall slightly during the day in the northern regions and rise slightly in the southern regions. Snowfall during the day today will bring 1-4” favoring the mountains near West Yellowstone and Cooke City. Another round of snowfall will start tomorrow morning.

Strong winds combined with a few inches of new snow have created thin fresh drifts that could break in small avalanches today. These will be the most obvious avalanche hazard today, but not the most worrisome. The less likely but more dangerous possibility is triggering an avalanche on the weak layers buried deeper in the snowpack. These avalanches could break 3-5 ft deep. A slide on Mount Abundance a few days ago (photo, photo) and the fatal avalanche last week on Scotch Bonnet (details) provide sobering examples of the sort of slides that could break today. The possibility of triggering one of these slides keeps us hesitant to ride slopes steeper than 30 degrees. The avalanche danger is MODERATE today.

In the Bridger Range thin wind slabs could break beneath freshly drifted snow or avalanches could break deeper on a thin layer of weak, faceted snow buried 1-3 ft deep. The weak layer that has been acting up in the Bridger Range is in the middle or upper snowpack instead of near the ground. Last week’s slides on Saddle Peak show why we’re concerned about avalanches breaking on this weak layer (details, photo, photo). This weak layer appears to be widely distributed so assume it is on every slope and plan your route according. Human triggered avalanches are possible and the avalanche danger is MODERATE.

Large avalanches are unlikely in the Northern Madison and Northern Gallatin Ranges. A few inches of new snow and strong winds have built thin wind slabs, but these will generally be thin enough and/or well bonded enough to not be a significant hazard. Stay on alert in case you find a slope with a thicker slab of wind drifted snow that is not well bonded. Cracks shooting out in front of your skis or snowmobile mean that you’ve found a problematic drift. Yesterday on Mt. Ellis I was finding the same generally stable snowpack we’ve seen elsewhere in the northern ranges, but I still dug a snowpit just before entering avalanche terrain as a double check to make sure I didn’t get surprised (video). Search for signs of isolated instability and be ready to adjust your plans accordingly. The avalanche danger is LOW. 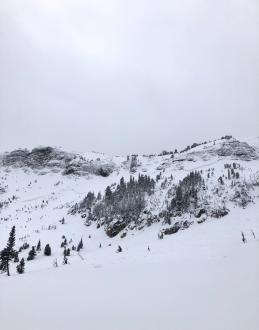 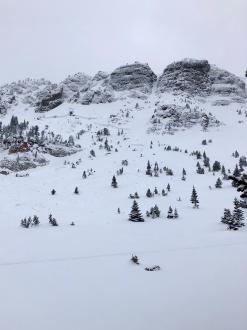 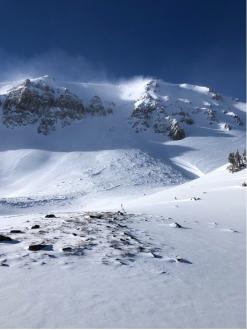 Snomobilers observed this natural avalanche on a NE aspect on Sheep Mountain on 1/1/22. It