Good morning. This is Ian Hoyer with the Gallatin National Forest Avalanche Forecast on New Year’s Day, Saturday, January 1st at 7:00 a.m. This information is sponsored by Gastrognome, Gaia GPS and Beartooth Powder Guides. This forecast does not apply to operating ski areas.

A trace to an inch of new snow fell yesterday morning. Winds are light out of the west and northwest. Temperatures are chilly this morning: negative single digits to negative teens F. Under sunny skies today, winds will pick up slightly in the northern part of our advisory area and stay calm in the south. Temperatures will rise into the positive single digits and teens F. The next snowfall is forecast for Monday night.

Winds died down and snowfall tapered off Thursday afternoon. We are now 36 hour out from the end of a large loading event (4-5 ft of snow over the last 10 days). The peak of instability has passed, but this does not mean that conditions are safe. All the ingredients remain in place for a slide, it just isn’t quite as hair trigger anymore. You could still trigger a large and potentially deadly avalanche breaking either within the recent snow or on weak layers near the ground. Remain very wary of slopes that were windloaded during the storm. We still don’t trust the weak layers at the ground (Lionhead video). Getting onto any steep slope requires careful evaluation of the snowpack. Today’s blue skies will be a welcome break after a long stretch of flat light and poor visibility, don’t let it lull you into complacency or as an excuse to push your luck. Human triggered avalanches are possible and the avalanche danger is MODERATE.

Large avalanches broke 2-3 ft deep on Saddle Peak on Wednesday and Thursday (details). We aren’t sure whether these broke under just the wind drifted snow from this past week or on a buried weak layer in the middle or bottom of the relatively thin snowpack (video). Either way, they are proof that large avalanches are possible, especially on windloaded slopes. We know that some slopes have weak layers mid-pack and some slopes have unstable wind drifts. This should keep you on alert. Be on the search for instability if you’re thinking about riding in avalanche terrain. Today, the avalanche danger is rated MODERATE.

Conditions are mostly stable in the northern Gallatin and Madison Ranges. Look out for isolated areas of instability such as wind loaded slopes where the drifts have not bonded well to the old snow surface. Be ready in case you get surprised. Dig a pit to double check stability before committing to a steep slope and as always, go one at a time and carry your gear rescue gear. Overall, large avalanches are unlikely and the avalanche danger is LOW today.  . 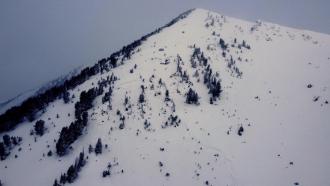 Upper portion of the fatal avalanche on Scotch Bonnet. 12/28/21 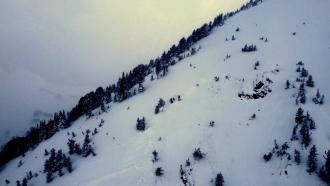 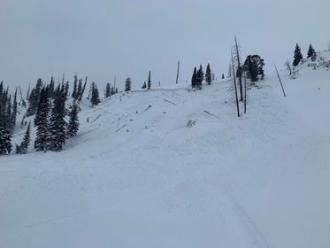