Good morning. This is Doug Chabot with the Gallatin National Forest Avalanche Forecast on Wednesday, December 29th at 7:00 a.m. This information is sponsored by Klim, The First National Bank of Gilbert, MN and Upper Yellowstone Snowmobile Club. This forecast does not apply to operating ski areas.

On Monday two snowmobilers were caught and killed in an avalanche on Scotch Bonnet Mountain, north of Cooke City. A group of 8 snowmobilers from Minnesota were on their second day of riding when 2 of them got stuck on the SE face of Scotch Bonnet. Two members of their party rode up to assist and the avalanche was triggered soon after. It broke 4-5 feet deep, ran 300 feet wide and 500 feet vertical and killed 2 riders, burying them under 4-5 feet of debris. Everyone had rescue equipment and they were recovered by their party. Park County Sheriff Search and Rescue brought the victims to town. Ian and I interviewed the group the night of the accident and conducted a field investigation yesterday. We will be posting a video and a full accident report in the coming days.

New photos and details from yesterday are on the Avalanche Incidents page.

Our deepest condolences go out to the victim’s friends and family, members of the group and the search and rescue community.

In the last 24 hours it snowed 3” in the Bridger Range, a trace to an inch around Hyalite and Big Sky, and 2” in the mountains around West Yellowstone and Cooke City. Wind is blowing west to south at 15-20 mph with gusts of 35 mph. Mountain temperatures are -2F to -8F. Today, temperatures will rise into the positive single digits with westerly wind blowing 20-30 mph. Scattered snowfall will drop 2-4” in the southern areas and 1-2” in the mountains around Big Sky and Bozeman by tomorrow morning.

In the last 7 days Cooke City and the southern ranges, including West Yellowstone, have gotten 4 feet of snow and wind making unstable conditions on wind-loaded slopes. The avalanche on Scotch Bonnet outside Cooke City could have occurred in any of the southern ranges since the snow structure and instability are similar. Snow was blown and packed into dense drifts that are poorly supported by weak, sugary facets 12-18” off the ground. Ian and I found this combination at the crown of the avalanche (photo). In the last 48-hours skiers saw a slide on Henderson Bench (photo) and riders triggered two small avalanches on Mt Abundance (photo).

Our recent field investigations in Lionhead (video) and Taylor Fork (video) illustrate the likelihood of  triggering slides on wind-loaded terrain. It is best to avoid these slopes. They will be found near ridgelines, above treeline and in gullies. The wind is still loading slopes and it is likely a skier or rider could trigger a large avalanche. For today, the danger is rated CONSIDERABLE on wind-loaded slopes and MODERATE on all others.

The mountains around Bozeman and Big Sky have gotten snow over the last 5 days: 12+” in the Bridgers, a foot in Hyalite and 6-8” in Big Sky. Skiing and riding has improved and folks are sending us observations. The snowpack is generally stable, but like most things in life there’s an exception: wind-loaded slopes could avalanche. These will not be deep or widespread, but triggering them is a possibility. Evidence of wind-loading are cornices, smooth pillows of dense snow and shooting cracks, a bullseye sign of instability.

With a trend toward stability signs of danger may not be prominent (avalanche activity, whumphing, etc).  Weak, faceted snow near the ground is widespread and should be looked at and tested before diving into avalanche terrain. We must hunt for instability because it’s much better to be the hunter than the hunted. We do not like surprises which is why we dig. Our field videos  last week should be a starting point for your stability assessment: Saddle Peak, Buck Ridge and Beehive Basin.  For today, it remains possible to trigger slides on wind-loaded slopes which have a MODERATE danger. On all other slopes avalanches are unlikely and the danger is rated LOW.

On Monday, December 27th, two snowmobilers were caught and killed in an avalanche on Scotch Bonnet Mountain, north of Cooke City. We investigated the scene yesterday and added photos and details on the Avalanche Incidents page. 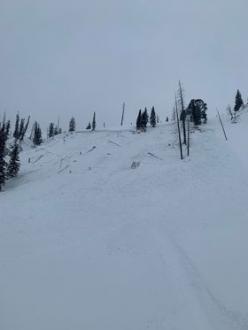 END_OF_DOCUMENT_TOKEN_TO_BE_REPLACED
Digging Out Sleds after an avalanche on Scotch Bonnet 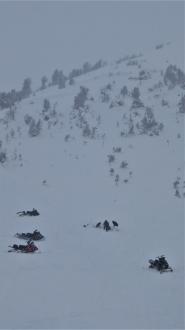 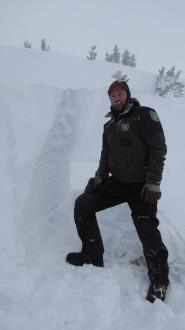 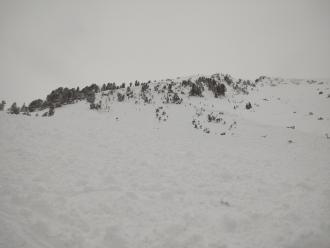 We are sad to report that on December 27th, two snowmobilers were caught and killed