Good morning. This is Dave Zinn with the Gallatin National Forest Avalanche Forecast on Monday, December 27th at 7:00 a.m. This information is sponsored by Advanced Innovation, Madison-Gallatin Chapter of Wild Montana and the Community Food Co-op. This forecast does not apply to operating ski areas.

Consistent snowfall for the last five days brings our storm total to 31-37” equal to 2.6” of snow water equivalent (SWE) in the Southern Madison and Southern Gallatin Ranges and 3.5” of SWE in the mountains around West Yellowstone and Cooke City. The combination of recent snow and moderate winds from the southwest creates dangerous avalanche conditions. While the wind will ease off today, recently formed 1-4’ deep drifts will remain unstable. Avalanches failing on weaker layers of snow in the mid and lower snowpack are a possibility and would be large and dangerous. This reality kept Doug and me out of avalanche terrain yesterday at Lionhead (video). Alex’s advice from the Taylor Fork and mine from last week in Cooke City holds true today, steer clear of wind-loaded slopes and carefully assess the snowpack and terrain features in non-wind-loaded areas prior to entering any avalanche terrain.

With the significant caveat that visibility is limited, we have not seen or received reports of widespread avalanche activity during this storm. We do have good indicators of instability such as large “whumphs” triggered by skiers near Bacon Rind on Friday (details) and unstable snowpack tests throughout the area failing and propagating within new snow layers and on weak layers near the ground. If you see an avalanche in the mountains today, snap a photo and submit it through our observations form.

The mountains around Bozeman and Big Sky received 5-8” of new snow equal to 0.3-0.5” SWE during yesterday’s storm with winds from the southwest quickly forming thicker drifts. Let recent signs of instability in wind-loaded terrain such as a natural avalanche on Saddle Peak on Christmas Day guide your travel plans today (photo). Remain dedicated to your safe travel protocols and pay attention to changes to the snow under your feet or sled, turning around if you enter a deeper drift, see shooting cracks or the snow surface seems to stiffen. These are the areas where triggering a slab avalanche within the new snow or on deeper weak layers is possible. Human-triggered slides on non-wind-loaded terrain are unlikely today. See our recent field videos from Saddle Peak, Buck Ridge and Beehive Basin for a further look. Today, the avalanche danger is MODERATE on wind-loaded slopes and LOW on all others.

THANK YOU! The Friends of the Avalanche Center arrived at our $65,000 goal for the Virtual Powder Blast fundraiser. Your donations will support free and low-cost avalanche education, beacon checkers at trailheads, beacon parks, weather stations, and GNFAC programs!

We are sad to report, On December 24th in Colorado, a skier was killed in an avalanche near Cameron Pass (Link to preliminary report). Our deepest condolences go out to those affected by this tragic accident. 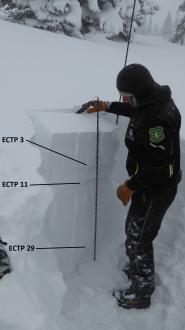 Dave Zinn of the GNFAC gets 3 layers breaking in his Extended Column Test. About 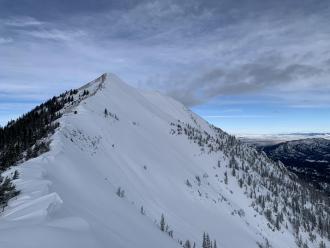