Good morning. This is Doug Chabot with the Gallatin National Forest Avalanche Forecast on Wednesday, December 22nd at 7:00 a.m. This information is sponsored by Cooke City Super 8/Bearclaw Bob’s and World Boards. This forecast does not apply to operating ski areas.

We turned a corner. Yesterday’s Solstice means days are getting longer and summer is approaching, but not quite yet. In the last 24 hours there is no new snow to report, but tomorrow morning we will have 1-2” in the mountains around West Yellowstone and Cooke City. Winds are west to southwest at 20-30 mph with gusts of 55 mph. Under partly cloudy skies temperatures are in the high teens to mid-twenties. Wind will be southwest, clouds will increase and temperatures will be in the high 20s F; warm for this time of year. More snow is expected Thursday and Friday.

In the mountains around Cooke City wind blew the previous day's snow (1-2 feet) into drifts. Some of these cracked (photo) which showed their potential to avalanche. Today the wind is still blowing yet loading is minimal. On Sunday and Monday, Dave hunted for weak snow and did not find much. He even titled his video “Good News from Cooke City”. His main concern was wind-loaded slopes and a weak(er) layer of sugary, faceted snow near the bottom of the snowpack. Avalanches are still possible as evidenced by a natural avalanche on a wind-loaded slope on Sheep Mountain (photo) yesterday. These dangers are isolated, but concerning nonetheless. Avoid wind-loaded terrain and be on the hunt for buried weak layers. For today, the avalanche danger is rated MODERATE on all slopes.

The southern Gallatin and southern Madison Ranges along with Lionhead have a suspect snowpack structure (dense snow being held up by weaker, sugary facets). In our stability tests we are finding this interface sometimes breaks. At Lionhead on Monday, it fractured in one of our two pits (video).  Other red flags of instability include widespread collapsing, or “whumpfs”, from skiers in Specimen Creek in a thin snowpack (less than 2 feet deep), and an avalanche a week ago in Bacon Rind. The potential to trigger slides is not widespread, but areas with weak snow near the ground, or slopes that have a thick load of wind-drifted snow require extra caution. Today, the avalanche danger is rated MODERATE on all slopes.

In the mountains around Bozeman to Big Sky the snowpack is mostly stable, with the exception of wind-drifts. Snowfall since Sunday (less than a foot) was blown into drifts from strong westerly wind. Loading has generally stopped, yet the instability lingers. Ian and his partner rode Buck Ridge and found the snowpack was adequately supporting recent snowfall (video). During times of decreasing avalanche danger it’s easy to be complacent, so I’m recommending you do as we do: always carry rescue gear, dig and assess slopes you plan on hitting, and only travel one-at a time in avalanche terrain (any slope greater than 30 degrees). And if you want to be really pro, carry an inclinometer in your pocket. Today the avalanche danger is rated MODERATE on wind-loaded slopes and LOW on all others.

The Friends of the Avalanche Center are hosting the Virtual Powder Blast fundraiser. With only $1,000 left to go, help us reach the $65,000 goal. Your donations support free and low-cost avalanche education, beacon checkers at trailheads, beacon parks, weather stations, and GNFAC programs!

Memorize the 5 steps to staying safe in avalanche terrain from Know Before You Go. Step #1 is Get The Gear. If you play in the mountains you need to carry rescue gear: an avalanche transceiver, a metal shovel and a probe pole. All three are life-saving items for yourself and your partners. 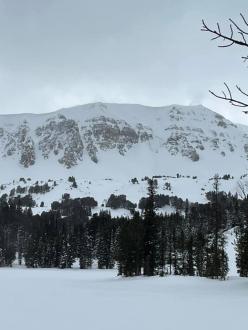 From Beartooth Powder Guides: Saw this small natural avalanche today while coming back from the