Good morning. This is Dave Zinn with the Gallatin National Forest Avalanche Forecast on Monday, December 20th at 7:00 a.m. This information is sponsored by onX and Blitz Motorsports and Yamaha. This forecast does not apply to operating ski areas.

Bridger Bowl is closed to uphill travel. Please stay off the hill as they prepare to open Tuesday (12/21).

In the last 24 hours, Cooke City, the Madison, Southern Gallatin and the Bridger Ranges picked up 4-7” of snow with 1” in the Northern Gallatin Range, and a goose egg in West Yellowstone. Temperatures are in the teens to low 20s F and winds are 15-30 mph from the west to southwest. Today, temperatures will reach the upper 20s F with southwest winds blowing 20-25 mph. The mountains around Cooke City will receive an additional 5-7” of snow through the day with 1-2” across the rest of the advisory area.

The mountains around Cooke City received 7” of snow overnight equal to 0.6” of snow water equivalent (SWE). Continued heavy snowfall through the morning in conjunction with increasing winds today will create dangerous avalanche conditions in wind-loaded terrain where human-triggered avalanches are likely. Yesterday, my partner and I observed generally stable conditions, but, today, will be carefully assessing for signs of increased instability and testing weak layers in the mid and lower snowpack now that they are loaded by new snow (video). Avoid steep wind-loaded slopes and carefully evaluate terrain and snowpack conditions before entering avalanche terrain.

The avalanche danger is CONSIDERABLE on wind-loaded slopes and MODERATE on all others.

The Bridger, Madison, and Southern Gallatin Ranges received 4-6” of snow equal to 0.4-0.6” of SWE in the last 24-hours. Southwest winds are transporting the new snow into drifts on wind-loaded slopes where instabilities will be the most evident. Recent avalanches in the Bridger Range on Thursday (photos and details) and the Taylor Fork (video) and Bacon Rind (photo) on Wednesday are indicators of the types of avalanches we are concerned about. Evaluate snowpack stability, paying special attention to wind-loaded slopes, and assess terrain for features such as cliffs, rocks, trees, and gullies that amplify the consequences of even a small avalanche prior to entering steep terrain.

Human-triggered avalanches are possible and the danger is rated MODERATE.

The northern Gallatin Range received 1” of snow in the last 24 hours while the Lionhead area remained dry. Wind from the southwest is creating fresh drifts of snow where avalanches are most likely to fail today. Similar to recent avalanches in the Southern Madison Range, these slides could be relatively small to 1-3’ deep breaking under last week’s snow (video, photo). Yesterday, groups of skiers testing the snowpack in Hyalite found both stable and unstable conditions illustrating the importance of assessing the specific terrain you are considering. Today, avoid freshly wind-loaded slopes where the danger is the greatest and assess the snowpack stability before traveling in steep terrain. Human-triggered avalanches are possible and the danger is rated MODERATE.

The Friends of the Avalanche Center are hosting the Virtual Powder Blast fundraiser. With only $1,500 left to go, help us reach the $65,000 goal. Your donations support free and low-cost avalanche education, beacon checkers at trailheads, beacon parks, weather stations, and GNFAC programs!

Sadly, On Friday two teenagers died in an avalanche outside of Driggs, Idaho in the Big Hole Mountains. Details so far are sparse, but initial reports are that they were skiing and snowmobiling (Link to news story). 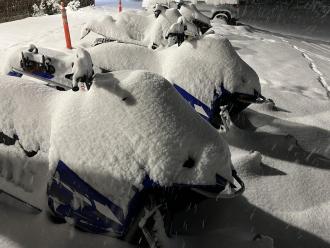 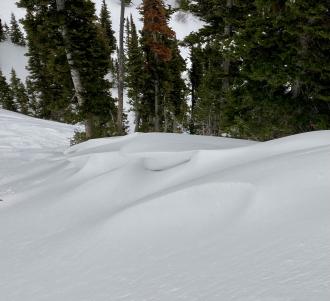 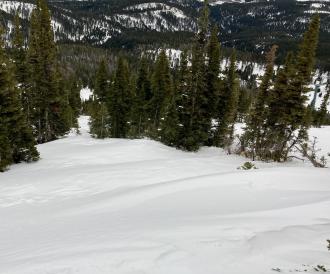 These pillowy, hard drifts formed from strong southwest wind overnight between 12/18 and 12/19/21 in