Good Morning. This is Alex Marienthal with the Gallatin National Forest Avalanche Forecast on Saturday, March 20th at 7:00 a.m. Today’s forecast is sponsored by Upper Yellowstone Snowmobile Club and The First National Bank of Gilbert (Minnesota). This forecast does not apply to operating ski areas.

This morning the mountains near Bozeman, Big Sky and West Yellowstone have 6-8” of new snow with 2” near Cooke City. Temperatures are 20s to low 30s F and wind is west-southwest at 5-15 mph. Today temperatures will be 20s to low 30s F with west-northwest wind at 5-15 mph. Steady snowfall could deliver 3-6” by this afternoon, and another 5-8” by tomorrow morning with potentially more near Cooke City and West Yellowstone.

The first day of spring feels like a return to winter. This morning there is 6-8” of new snow equal to 0.6-0.8” of snow water equivalent (SWE) near Bozeman, Big Sky and West Yellowstone with steady snowfall expected today. The new snow fell onto weak, sugary snow on some slopes and crusts on other slopes. These interfaces make large avalanches of the new snow easy to trigger and may cause slabs to break wide and run long distances. Yesterday Doug saw the weak snow on the surface in the Centennials (outside our advisory area, but similar snowpack) and explains why it is a concern in his video (Doug’s video, photo). Doug was snowmobiling with Mark Staples, director of the Utah Avalanche Center, who appears in Doug’s video and discusses terrain to watch out for, such as steep slopes up high and confined gullies where sliding snow can pile up deep.

In the mountains near Cooke City snowfall totals are less than elsewhere, but they should catch up or surpass other places by tomorrow morning. Doug was riding near Cooke City on Tuesday and found weak layers on the surface, similar to elsewhere, that are now buried by new snow (video). This morning a couple inches of new snow will create minimal instability, but this afternoon will be different. Heavy snow today could pile up quickly and create slabs that easily slide on the old snow surface. Expect stability to decrease through the day, and carefully evaluate the stability of the new snow before riding steep slopes. Watch for cracks breaking across the snow surface under your sled or skis as one sign the new snow is becoming unstable. Today avalanches of new snow are possible to trigger and the avalanche danger is MODERATE.

Bears. Grizzly bears. They are waking up, stretching their limbs and looking for food. Walking the aisles in Safeway puts you on top of the food chain; when you are in the backcountry, they are. Carry a beacon, shovel, probe...and bear spray. Bozeman Daily Chronicle article. 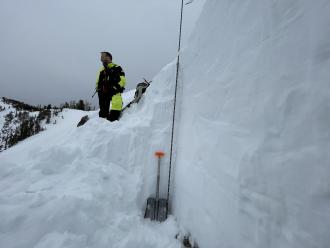