Good Morning. This is Doug Chabot with the Gallatin National Forest Avalanche Forecast on Thursday, March 11th at 7:00 a.m. Today’s forecast is sponsored by World Boards and Mystery Ranch. This forecast does not apply to operating ski areas.

In the last 24 hours, the Big Sky area got a dusting of snow and Cooke City got an inch. Wind is remarkably calm with temperatures of 5-10 F under mostly clear skies. Today will be sunny with light west to north breezes and temperatures rising into the high thirties. Temperatures will warm through the weekend and no snow is expected until early next week.

The snowpack has weak snow near the ground (sugary facets/depth hoar), but is mostly stable. Weak and stable are contradictory terms but describe two different things. The snow structure is poor since it’s foundation is crumbly snow. It can not hold much weight, especially weight that is applied quickly such as a big snowstorm, and is considered weak. Yet it is mostly stable because it is in a state of rest. The snowpack is relaxed, feeling good and not being tasked to hold up a big load of new snow.

Weak layers near the ground are scary because avalanches will be deep, but triggering them is unlikely on most slopes. The exceptions are isolated areas with a thin snowpack where a person could trigger a slide and have it propagate under adjacent, deeper snow. Dave and I were in Tepee Basin yesterday and found weak snow 5-feet under the surface and got it to break in our stability test (video), a cautionary message that a skier or rider could trigger a slide on the wrong slope. In order to deal with the uncertainty of these conditions we adhere to strict travel protocols just in case we err and trigger a slide. Ian’s video from Tuesday in the northern Bridger Range lays this travel advice on us clearly: only expose one person at a time, watch each other from a safe spot, carry rescue gear and take a quick look at the snow layering before diving onto steep terrain.

For today, the avalanche danger is rated LOW on all slopes.

A caveat: Wet, loose snow avalanches could occur on steep slopes if the temperatures are warmer than predicted. Roller balls and pinwheels of snow are signs of instability at the surface and a warning that steep slopes should be avoided.

The mountains around Cooke City got an inch of snow last night with no wind. This is not enough snow to adversely affect the good snow stability, especially since slopes lack a widespread weak layer. Snowfall on Monday and Tuesday (6-10”) may have been blown into drifts and skiers on Tuesday saw small avalanches involving only new snow (photo). These isolated instabilities are reminders to carry rescue gear, travel one at a time, watch each other and take a moment to assess the snowpack before committing to steep terrain. Overall the mountains have safe avalanche conditions and the danger is rated LOW.

Accident reports have now been posted for many of February’s tragic avalanche fatalities across the western US. Take a bit of time to read them and try to find lessons to help yourself become a safer backcountry traveller. 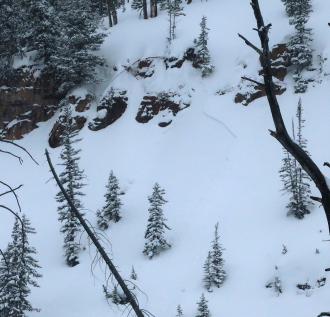 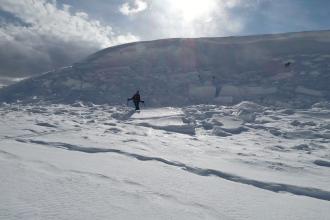