Good Morning. This is Ian Hoyer with the Gallatin National Forest Avalanche Forecast on Saturday, February 13th at 7:30 a.m. Today's forecast is sponsored by Summit Motorsports and Ski-Doo and Montana Chevy Dealers. This forecast does not apply to operating ski areas.

There is a trace to 2” of new snow across the advisory area this morning. Temperatures range from the negative teens F to the positive single digits F. Winds are generally westerly at 5-15 mph, with gusts of 20-25 mph. In the Bridger Range and Lionhead area light winds are out of the east. Winds today will be 5-15 mph from the northwest. Temperatures will rise to the single digits F in most areas. Light snowfall today will bring a trace to 2” by tomorrow morning.

A dusting of snow overnight doesn’t change the big picture avalanche situation. We’re now five days out from the end of the largest storm of the season. 2-4 ft of snow fell during that storm and there were widespread natural avalanches (see the Avalanche Log for a full list). The snowpack is slowly stabilizing, but the weak snow low in the snowpack remains concerning.

On Thursday, snowmobilers triggered large avalanches in the Lionhead area and near Big Sky (Lionhead photo, Portal Creek photo). The slides near Big Sky were triggered from a slightly less steep slope in between the two slopes that slid. Triggering similar large avalanches remains possible today. Avoiding steep slopes is the simplest and the safest plan. If you are going to get into avalanche terrain, make sure you’re carrying rescue gear (beacon, shovel, and probe), ride one at a time and have a partner watching you from a safe spot so they’re ready if something goes wrong. Snowpack tests can be a good double check before committing to a slope, but don’t let “stable” snowpack test results lull you into a false sense of complacency (Teepee Basin video).

Large avalanches during last weekend’s big storm in Cooke City should continue to give you pause today. Three to 4 ft of new snow and strong winds led to a large avalanche on the south face of Mt. Abundance (photo), a slide on Town Hill (photo), and slides that propagated widely, low on Woody Ridge (photo). These slides broke on weak snow low in the snowpack. It will take hitting just the wrong spot to trigger an avalanche on these layers. Don’t let tracks on a slope fool you. Make good decisions for yourself, because it may be the 10th or 50th rider that triggers the whole slope. The avalanche danger today is rated MODERATE.

The Utah Avalanche Center has released the full report from the tragic avalanche accident with four fatalities last weekend. It is worth reading these reports to try and glean whatever lessons we can to help us all be safer backcountry travelers. 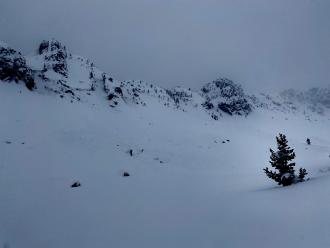 Natural avalanche on an east aspect in Beehive Basin. Likely broke on Sunday, 2/7/2021. 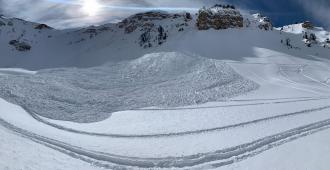 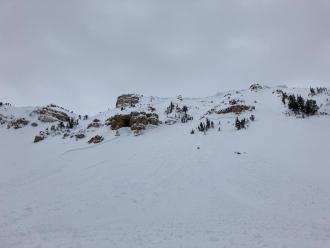