Good Morning. This is Alex Marienthal with the Gallatin National Forest Avalanche Forecast on Sunday, February 7th at 7:30 a.m. Today's forecast is sponsored by Blitz Motorsports and Yamaha and Community Food Co-op. This forecast does not apply to operating ski areas.

Since last Sunday there have been 15 avalanche fatalities in the U.S. The most in one week in the U.S. since 1910 (NYT article). Yesterday in Utah, 8 skiers were caught (two separate groups of 4) and 4 were killed. Three events in the last week involved multiple burials and deaths. Our deepest condolences go out to the family and friends of those involved in all the recent events. More info at: avalanche.org/avalanche-accidents/

Over the last 24 hours the mountains received 8-14” of snow near Big Sky and Cooke City, 6” near Bozeman and 4” near West Yellowstone. Wind has been west-northwest at 15-25 mph with gusts of 40-60 mph. This morning temperatures are single digits to low teens F. Today temperatures will reach low teens F before dropping to single digits F above and below zero tonight. Wind will be west-northwest at 20-30 mph. Snowfall will continue with 5-7” possible near Bozeman, Big Sky and Cooke City and 1-2” near West Yellowstone by tomorrow morning.

Over the last couple days there have been reports of large natural avalanches, collapsing and cracking in the Bridger Range (Saddle Peak and Truman, N. Bridgers), Hyalite, and the southern Gallatin Range. Many of which broke wide on sugary, buried weak layers. Since Wednesday the mountains near Bozeman and Big Sky, and the southern Madison and Gallatin ranges received 2-4 feet of snow equal to 2-3.5” of snow water equivalent (SWE). Strong west-northwest winds over the last 48 hours drifted this snow into thick slabs that can avalanche naturally or easily be triggered by skiers or riders. Today, with continued snow and wind, very dangerous avalanche conditions exist and danger is HIGH on all slopes. Avoid travel on and underneath steep slopes.

Since Wednesday the mountains near Cooke City received over three feet of snow equal to 2.6” of  snow water equivalent. On Friday a skier triggered and was partially buried in an avalanche south of town (photo and details). Moderate to strong westerly wind the last couple days, with more snow and wind today make natural and human triggered avalanches likely. I was in Cooke City the last few days where avalanches breaking in the new snow were a growing concern, especially where new snow has been drifted into thicker slabs (video). Avalanches of recent snow will be large enough to bury a person, and some slopes could break deeper on buried weak layers. Today the avalanche danger is HIGH on all slopes. Avoid travel on and underneath steep slopes.

Yesterday near Lionhead Ridge a snowmobiler triggered an avalanche that broke wide, and luckily nobody was caught (photo). Since Wednesday the mountains near West Yellowstone received 2 feet of snow equal to 2.1” SWE, with an inch or two possible today. A layer of weak, sugary snow buried 3-4 feet deep can collapse under the weight of a person, and break wide across slopes (Lionhead video). Today human triggered avalanches are likely and natural avalanches are possible, especially on wind loaded slopes. Avalanche danger is CONSIDERABLE. Very careful route finding is essential.

TODAY, Fundraising prize winners will be based on the top 5 tallies at 1:15 p.m. It's not too late to get involved. AWESOME PRIZES of two pairs of skis, Airbag Avy pack, and more! Info is HERE.

With this deep snow also be cautious of snow immersion/suffocation. From a skier in Hyalite yesterday: “[skied] low angle slopes - but keeping the terrain mellow meant our biggest concern was deep snow immersion/tree wells... which were REAL hazards today. At one point I had an odd prerelease, crashed and ended up slightly head down choking on snow and thankfully my partner was close and able to help right me.” 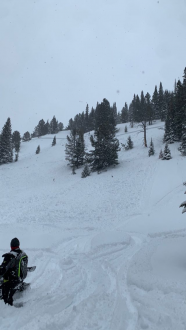 Sledders triggered this slide on 2/6/21 in West Targhee Creek near Lionhead. No one was 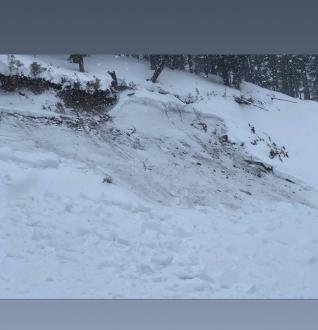 Skiers in in northern Bridgers remote triggered this small slab on 2/6/21. Photo: @ckussmaul 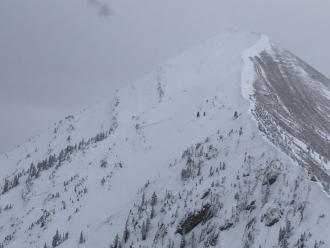 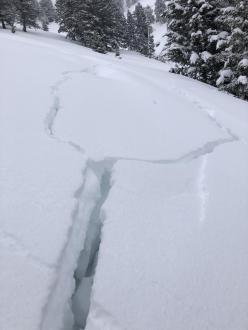 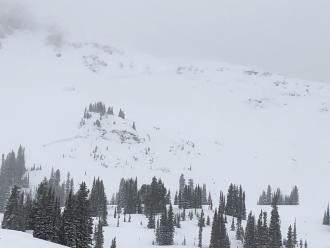 Froma skier that tooured in divide cirque today. "In the basin, between pt 10,201 and